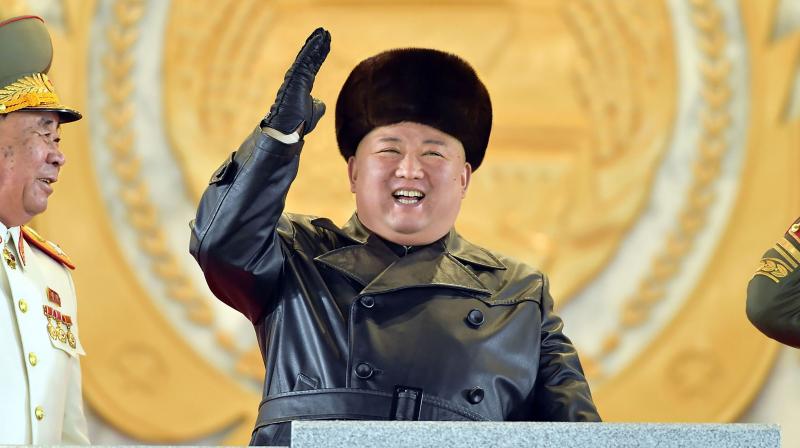 KJU designated the United States as its biggest enemy, but also kept the door for dialogue ajar by asserting that the US changing its hostile policy was necessary to establish better ties. (Photo:AFP)

At the eighth congress of the ruling Workers’ Party on January 5-12, North Korea’s supreme leader Kim Jong Un (KJU) was bestowed with an additional title of “general secretary”. In Communist parties, the general secretary of the central committee is the most powerful post as the party secretariat controls personnel, internal affairs and discipline. In the old Soviet Union, Josef Stalin eliminated all rivals as the CPSU’s general secretary. After the abolition in 1982 of the post of chairman of the Communist Party of China, the country’s paramount leader is the central committee general secretary, a position held by President Xi Jinping. In North Korea, KJU’s father Kim Jong Il, as well as the republic’s founder Kim Il Sung, had occupied this powerful position.

In recent times KJU has shown increasing sensitivity to the poor living conditions of the long-oppressed North Korean masses and has given more attention to economic growth. The economy suffered badly from the sanctions imposed by the UN Security Council, the most recent in Resolution 2371 of August 2017. The North Korean regime is faced with an existential dilemma. Any compromise on giving up its nuclear weapons capacity could threaten the regime’s survival as it could open a window for a US-led external attack or internal revolt.

In an autocratic system where the supreme leader is seen as infallible, it was surprising for KJU to accept failures on the economic front. In his address at the congress, KJU noted with regret that “the goals we set were immensely underachieved in almost all areas”. In a candid assessment reflecting the economy’s dire condition, KJU said the last five years were “the worst of the worst” for North Korea.

The unprecedented 2018-19 dialogue with outgoing US President Donald Trump was triggered by the North Korean leader in his New Year message of January 2018 in the hope that North Korea may obtain some easing of sanctions without giving up its nuclear deterrence capability. In the three summits between Mr Trump and KJU in Singapore, Hanoi and the DMZ, the US establishment managed to restrain President Trump from signing a limited deal that would have eased the sanctions without a time-bound roadmap towards “complete, verifiable and irreversible denuclearization” of North Korea.

In a signed article in Foreign Affairs last April, then-candidate Joe Biden had set out his approach towards North Korea: “I will empower our negotiators and jumpstart a sustained campaign with our allies and others, including China, to advance our shared objective of a denuclearised North Korea.” Herein lie the seeds of fundamental differences between the two parties: North Korea’s stated objective being “denuclearisation of the Korean peninsula”.

In his opening speech, KJU designated the United States as its “biggest enemy”, but also kept the door for dialogue ajar by asserting that the US changing its “hostile policy” was necessary to establish better ties. In his closing remarks, KJU vowed to “strengthen the nuclear war deterrent”.
North Korea has not slowed down its development of nuclear weapons and delivery systems. In October, at the military parade marking the 75th anniversary of the Workers’ Party, a massive new ICBM was displayed. In another military parade on January 14, North Korea unveiled a new submarine-launched missile claiming it was “the world’s most powerful weapon”.

To draw Washington’s attention, KJU is likely to resume the time-tested North Korean policy of brinkmanship and shrill rhetoric. He may refrain from personal attacks on President Joe Biden but apply pressure by threatening an ICBM or nuclear test. The Trump administration’s one success was to pressure KJU to temporarily cease high-profile testing. The last North Korean nuclear test was in September 2017 and the last ICBM test in November 2017.

After nine years at the helm, the young 37-year-old KJU has evolved as a confident and mature personality. He met President Donald Trump thrice in full media glare and often made extempore unprepared remarks. remarks. He has gradually given some visibility to his sister Kim Yo Jong after ruthlessly eliminating any possible challenger to his untrammelled power. However, at the congress, Kim Yo Jong seems to have been dropped from the politburo which she joined as an alternate member last year.

The world at large needs to appreciate KJU’s efforts to lead North Koreans in the direction of a better life while ensuring regime survival along with peace and stability on the Korean peninsula. South Korea’s President Moon Jae-in is a sympathetic partner of KJU in this endeavor. India would hope that the two Koreas and the US work in harmony to pursue the twin objectives of the denuclearisation of North Korea and peace and tranquillity in Northeast Asia.