The rise and rise of Lanka’s Rajapaksas

India, partner or adversary, lies in the hands of the new strongman in Sri Lanka. 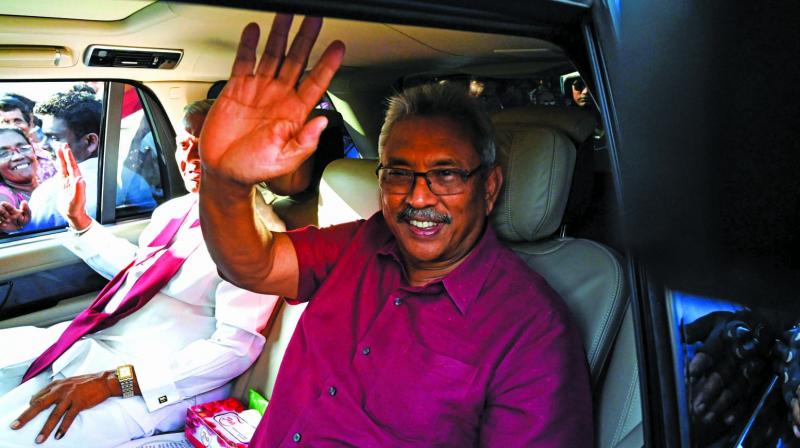 Sri Lanka’s new President Gotabaya Rajapaksa, sworn in on Monday against the symbolic backdrop of the Bodhi tree in the spiritual capital of Anuradhapura, was sending out a strong message of thanks to the powerful Buddhist clergy which had thrown its weight behind his presidential campaign.

But in stressing that he would be a President for all Sri Lankans, within hours of winning an unprecedented mandate with 52.25 per cent of the vote on Sunday, Mr Rajapaksa may have been demonstrating that unlike when he called the shots in his previous avatar as the powerful defence secretary in his brother and former President Mahinda Rajapaksa’s government in 2005-15, and decimated the violent, secessionist Tamil Tigers, he must win the trust of the moderate Tamils and Muslims who voted overwhelmingly for his rival, Sajith Premadasa.

The deeply divisive figure, who once revelled in the monikers “Hitler” and “Terminator” for his demonstrable ability to silence critics with enforced disappearances through the ubiquitous “white vans”, secured this 2019 victory with the backing of the majority Sinhala community, based on his reputation for getting things done. But to pull Sri Lanka out of the downward economic spiral that it has plunged into, following the Easter Sunday blasts as tourist numbers simply dried up, he simply cannot bring back the climate of fear and intimidation that marked his previous stint in government. The Muslims cannot morph into the new enemy.

Sri Lankans have no doubt voted for a man they believe will deliver on the security front, but it is also a vote for the representative of a family that the outgoing government accused of corruption but failed to indict on corruption charges, and have now entrusted, with giving a much needed boost to the economy. Sceptics are already saying it will be no easy task in a deeply divided nation, still coming to terms with the Easter Sunday bomb attacks that claimed the lives of some 240 people and placed a huge question mark over the largely prosperous and forward-looking Muslim business community, that the Islamic State sees as a soft target.

That the former soldier would tap into the insecurity fuelled by the blasts — and the perception of an inept Maitripala Sirisena-Ranil Wickremesinghe government’s massive intelligence failure and its mishandling of the economy — to win votes in the south, was a given. But in the eastern provinces where the Sri Lanka Muslim Council prevails, Mr Rajapaksa has simply cut no ice. Similarly, given that the Tamils remain the biggest holdout against the powerful Rajapaksa family, and that the Tamil National Alliance, which speaks for the largest ethnic community in the north of the island, has not yet reconciled with the man they hold responsible for the unspeakable horrors visited on their people when the Sri Lankan military closed in on the Liberation Tigers of Tamil Eelam and its leader Vellupillai Pirabhakaran in May 2009, this incoming government may have little choice but to reach out to the TNA and, more important, look to its larger neighbour India’s good offices to bring them around.

Mr Rajapaksa has already said he will not go forward with the UN Human Rights Council-directed probe that the government agreed to in 2014, on the military’s war crimes against the Tamils. Whether New Delhi will now mount a diplomatic campaign on Mr Rajapaksa’s behalf to vilify the Tigers and justify the campaign to eliminate the LTTE, remains to be seen. While it is fairly well known how the younger Rajapaksa crafted the strategy that closed off the Tigers’ arms supply and cut off the terror group’s eastern wing, thereby crippling the LTTE war machine, few know how closely he worked with the Manmohan Singh government and the Indian Navy as well as Washington in blocking off all escape routes for Prabhakaran and his family. And this included shutting down a play by one of his trusted lieutenants to reach out to India and plead for safe passage, if not asylum, for the Tiger leader.

Gotabaya may not have the polished charm of a Mahinda who can single-handedly draw the crowds and is slated to be inducted as Prime Minister by April next year — or even earlier, but he is a master strategist who has already sent out strong feelers to the Narendra Modi government, not once but several times in the past six months.

If his inner circle of advisers are to be believed, his blueprint for a domestic turnaround sees India squaring the Tamil circle. Under the outgoing Maitripala Sirisena government, the present Prime Minister, Ranil Wickremesinghe, did oversee the reintegration of some 11,500 Tamil Tigers, accused of all manner of atrocities, back into society. India would like to see no further vilification of the Tamils, some closure on the fate of the “disappeared”, and a rehabilitation of the war-devastated north, the rebuilding of their homes and their lives, that has seen a far greater presence of an intrusive Sri Lankan military than before. Tamil anger and unease must be assuaged, even if it means revisiting the unresolved issues of devolution of powers to the northern provinces — however watered down — and doing nothing to imperil the livelihoods of fishermen and restoring the farmlands, taken by the military, in the largely agri-centric north.

Mr Rajapaksa has signalled that he wants to take the blueprint he used to transform Colombo city into a magnet for big ticket investment, to be replicated across the country. And while that is a challenge, it is in his management of the neighbourhood, particularly India as part of the “greater family”, and his own “neutrality” vis a vis China and India, that acknowledges for the first time, the debt trap posed by Chinese investment in Sri Lankan ports like Colombo and other projects, including in his hometown of Hambantota, that has adversely impacted the Sri Lankan economy, that he will be really tested.

He is hoping the Narendra Modi government will look at Sri Lanka with “a new set of eyes”, bringing home to New Delhi that the island nation may be small but it does occupy a strategic position in the heart of the Indian Ocean, sitting astride a major trade route that the new President believes could be the pathway to move Sri Lanka to a first world country. India, partner or adversary, lies in the hands of the new strongman in Sri Lanka.