The body is technically completely covered with hardly any skin showing. 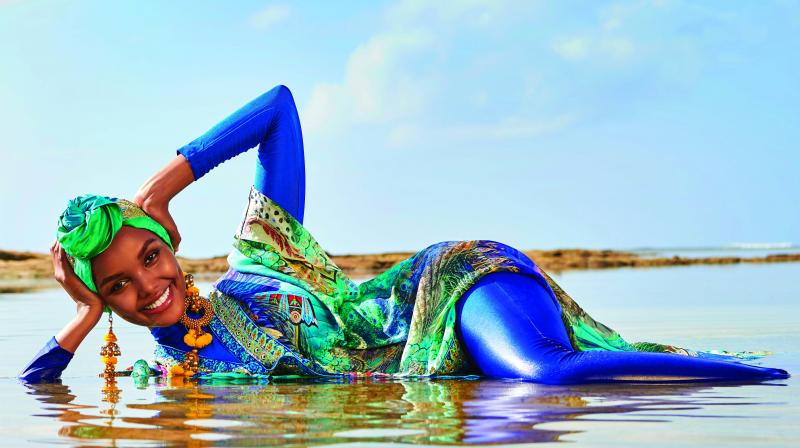 In the aftermath of Aden’s swimsuit issue debut, she has been variously hailed as Muslim heroine standing up for the burkini (which is banned in France) and the ability of Muslim women to do just about everything while adhering to the precept of being “covered up”.

Others have criticised and castigated her, arguing that the point of hijab itself is modesty, a modesty quite at odds with appearing in the swimsuit issue of Sports Illustrated.

Still others have noted that seeing everything women in hijab do for the first time as historic risks further entrenching the premise that Muslim women are the sum total of what they wear or don’t wear, mute and simple compendiums of hijabs and headscarves and now burkinis.

Aden’s debut presents all of these dilemmas and more.

At the outset it must be noted that the styles and tightness of burkinis vary widely. In its most conservative iterations, it features a sort of dress that comes to mid thigh with tights that go down to the ankles. The dress portion is full-sleeved and includes a headpiece.

Others, such as the one in which Aden herself poses, are skintight from top to bottom with an optional cover-up to tie around the hips. It would be fair to say that these hug the body closely and follow every curve and contour of the wearer. The body is technically completely covered with hardly any skin showing. At the same time, the tightness of the garment leaves the question of what counts as covered up entirely open.

Before one can decide whether modesty or being covered up is the goal of the burkini, it is important to remember that it has a tendentious history. Just over two years ago, a woman in France was actually forced by French police to do away with her burkini, following a ban on it by various French cities. The incident, which involved a literal admonition to remove parts of the burkini on the spot, brought tremendous attention to the garment, with many Muslim women in Western countries adopting it as a means of going swimming while also being covered up.

Less prominent in the discussions surrounding these early adopters was whether the garment was simply fulfilling a theoretical demand to be “covered up” or whether it fulfilled the larger principle of not drawing attention to one’s body.

This latter question is in fact the most vexing one. No one who looks at Aden’s pictures in Sports Illustrated can argue that they are meant to evade rather than attract attention. The colours are bright and the fabric skintight; if there is an effort to be covered up, there is equal effort to be noticed and appreciated.

The dilemma extends much farther than burkinis: of late, Muslim models and fashion shows have also emerged on the scene. While their clothes may be different to what Aden wears in the Sports Illustrated issue, it can safely be assumed that their participation in fashion shows around the world is meant to attract rather than detract attention from their bodies.

In all of these cases, the point is to be covered up but to be seen and appreciated; a point that goes against modesty, which would demand the opposite.

In fact, if modesty is really the goal, then many practices — particularly those of Western women — become questionable. If one wishes to detract attention from the physical self and merge with the multitudes, then the choice of hijab itself is contrary to it, its wearer attracting far more attention in the act of covering her hair while surrounded by women who do not cover their hair. The same logic could also apply to the burkini; the fact of its difference from all the other attire worn on the beach likely attracts more attention than a nondescript swimsuit that is similar to others. In this sense, the burkini is pointless in the enactment of modesty and being covered up.

Finally, there is the issue of what covering up has come to mean in recent years. The isolation and discrimination against Muslims in Western countries has meant that the act of covering up no longer simply stands for modesty but for the act of establishing Muslim identity in public. It is perhaps this last sense in which Aden perceives her own actions.