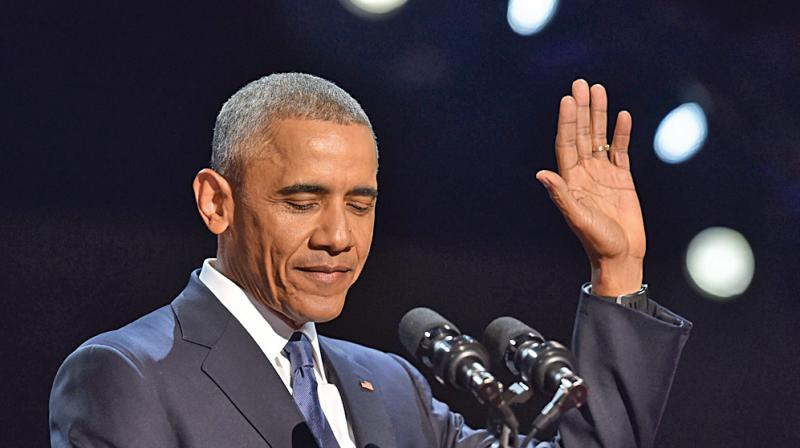 Barack Obama achieved the first objective in a messy sort of way while he could not come clean on the second, with some American troops remaining in Afghanistan after he leaves office.

As Barack Obama bids goodbye to eight years of the US presidency, what is his legacy? The sense of euphoria that swept the streets of Berlin and elsewhere in the world even before he assumed office was palpable and the Nobel Committee was so impressed by his potential that it awarded him the Nobel Prize in anticipation of what he would do.

The New York Times recently asked its readers for a response and received 1,300 answers enumerating his class, dignity, intelligence and humour. His feat in becoming the first black President of a country that brought blacks as slaves was, indeed, remarkable. And yet as he hangs up his boots, a tinge of disappointment is apparent as one looks back, despite his achievements.

First, his achievements: a long-needed opening to Cuba, the Paris climate change accord, eliminating Osama bin Laden, the Iran nuclear deal and Obamacare, the first serious attempt at covering most citizens’ health, the only industrialised country that did not provide it. But the legacy he longed to be remembered by, the Trans-Pacific Partnership in his pivot to Asia (from the Middle East), has been rubbished by his successor Donald Trump. And Republicans are in the process of demolishing Obamacare.

Mr Obama came to office vowing to get his country out of the two disastrous wars in Iraq and Afghanistan. He achieved the first objective in a messy sort of way while he could not come clean on the second, with some American troops remaining in Afghanistan after he leaves office.

Perhaps his biggest failure has been in two areas — his refusal to observe the red line he himself had drawn if Syrian President Bashar al-Assad used chemical weapons. Second, his abandonment of the Palestinian cause after his secretary of state’s initial failed marathon effort. It was his soaring rhetoric in Cairo early in his first term that drew worldwide plaudits.

In the most extensive record of the Obama Doctrine after seven years in office, Jeffrey Goldberg of the Atlantic magazine has come to the conclusion that Mr Obama’s Cairo rhetoric was lost in the hopes stirred by the Arab Spring, quickly to be dashed by the traditional form of dictatorial rule. In the Palestinians’ case, he gave up because of the power of the Jewish lobby in the US administrative and legislative spheres. Mr Goldberg believes Mr Obama became “steadily more fatalistic about America’s ability to direct global events”.

Yet on Ukraine, a bone of contention between Russia and the West, Mr Obama was privately quick to realise that it was “a core Russian interest, but not a core American one”, although he failed to act on this realisation, perhaps because the issue was tangled with how the West took advantage of a weakened Russia on the breakup of the Soviet Union.

But it was China above all that took up much of Mr Obama’s time and attention, to the point of his being obsessed by it. He believed that the US-China relationship was “going to be the most critical” and if it failed, it would be bad for “us and the world”. Given the cultivated bonhomie between him and Prime Minister Narendra Modi, it is significant that in the entire series of chats and interviews with Mr Goldberg he did not say a word about India. Pakistan deserved notice for the wrong reason: its capacity for mischief.

As a teaser, Mr Goldberg went to the guru of American diplomacy, Henry Kissinger, for his assessment of the Obama Doctrine. He was not disappointed, the former foreign policymaker for Presidents dismissing the Obama Doctrine as “an essentially reactive and passive foreign policy”. He further commented: “To many leaders around the world, Obama remains a puzzle after eight years in office.”

Giving Mr Obama a B-plus on China, Mr Kissinger declared: “The United States and China will be the world’s most consequential countries... As a first step forward, we might try to develop an understanding of how joint Sino-American action could stabilise the world.”

Mr Kissinger’s comments on China must be set against the backdrop of his opening to China in the Nixon era and the rapport he developed with Chinese leaders of that era, including Mao Zedong. A classical practitioner of realpolitik, Mr Kissinger appreciated Chinese skills in playing politics in the larger sense.

Returning to Mr Obama’s legacy, his rhetoric never kept pace with the markers on the ground. As the first black President, he was careful not to overemphasise his race because he wanted to be seen as the President of all Americans. But it is a cruel fact that his eight years in the White House did not improve race relations; rather, his time saw tragic deaths of blacks at the hands of white policemen and otherwise. Indeed, Mr Trump’s campaign has given a fillip to racist forces.

But in spite of the din of the raucous presidential campaign and the nature of Mr Trump’s rhetoric, Mr Obama comes across as a highly intelligent leader versatile in his gifts and dedicated to doing good for his country. He was of course fighting for American interests but he was civilised in his dealings at home and with the world.

If Mr Obama’s successor’s very different personality and views put some of his achievements in the shade, the American political system must sort it out. The problem with Mr Trump’s “America First” slogan is that the world has moved on and globalisation, despite clashing with new expressions of nationalism, is here to stay. Technological progress cannot be pulled back.

Perhaps Mr Obama was reacting to the evils of his predecessors’ bouts of military adventurism that he tilted too far in the other direction to be the “peace” President. This did not sit well with the Washington establishment or the spirit of machismo that is cultivated in large sections of American society. True, Americans got tired of futile wars, first in Vietnam and the two more recent wars, but it is in the American character to show off their awesome military might.