Having fought for and achieved Brexit, Clueless has no recourse to the EU rules that govern the arrival and accommodation of asylum seekers 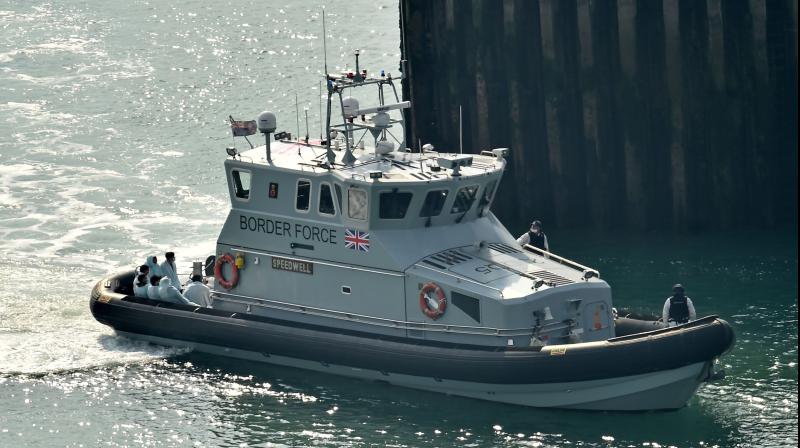 Migrants (left), believed to have been picked up from boats in the Channel by UK Border Force officers, arrive in the harbour aboard Coastal patrol vessel "HMC Speedwell", in the port of Dover, on the south-east coast of England. AP Photo

“If you are willing to embrace
The friend who’s proved a disgrace,
If you are willing to forget
That she never expressed regret,
If forgiveness is in your heart
For the bastards who tried to tear you apart,
If you overlook all halkat paana
You’ve probably, you fool, achieved nirvana.”
— From Daktar Shiva Ko by Bachchoo

Context changes everything. In the days of the American invasion of Vietnam we walked the Indian streets chanting “Ho, Ho, Ho chi Minh”.

Living in Britain I came to realise that the phrase “ho ho” was used, principally by the upper class or pretentious bourgeoisie, as an expression of derision for the ludicrous.

I didn’t know in those innocent days that our marching slogan could have meant that Ho chi Minh was a laughable entity and not the heroic opponent of American imperialism.

Nevertheless, I have come to believe that “ho ho” as an expression of derision is quite useful.

I have no pretences to being British bourgeoisie. (British people call themselves English, Welsh, Scottish or Irish — it’s only us immigrants and perhaps Jews who are labelled ‘British’) but it comes to mind every time I contemplate the acts and idiocies of the present government of these sceptred isles.

This is especially so when listening to reports of the doings and statements of the present home secretary Priti ‘Clueless’ Patel. She is a dynamo with the intellect of Donald Trump, a knowledge of British history which could compete with that of an 11-year-old in Chennai, and a finger on the pulse of British opinion which is akin to a witch doctor holding the wrist of a corpse he has fatally sacrificed.

Allow me, gentle reader, to eat humble pie and retract a speculative statement I made a few columns ago in this very newspaper. It was about Britain’s reaction to illegal immigrants landing on Britain’s shores in collapsible rubber dinghies and seeking asylum here.

I said, with some frivolity and some conviction that if Priti Clueless went to Washington and talked to Trump she would probably return and propose to the British government that they build a wall in the British Channel to prevent illegal immigrants crossing it.

I must now humbly admit that Clueless has not been to Washington to ask Trump’s advice and has made no such proposal to the British government. Instead, we audiences of the BBC, saw her on a naval boat cruising around the English Channel.

I didn’t gather from the report of her cruise what its object was.

Perhaps the British naval patrols, or whoever gave her that ride, thought it best to inform the present home secretary that Britain — this sceptred isle as Shakespeare and I call it — was separated by water from the continent of Europe, principally to the south from France by a stretch of water called the English Channel.

It was through this stretch of ocean, Clueless must have been told, that the precarious rubber dinghies, packed with immigrants from Iraq and Africa, arrive.

To anyone with a particular view of race and of who should live where, the figures of such arrivals must be alarming.

In the last few months five thousand of them have been picked up by the British naval coastguardwallas and brought to “camps” on British shores.

Perhaps Priti Clueless is aware that Britain’s navies have to pick up people who are drifting in the ocean. This is part of international law to which every civilised country has subscribed.

This number of illegal gatecrashers would not fill even one fifth of the football stadium of a second premier league team.

But of course, Clueless and her boss BoJo are deeply concerned. Their premier point of appeal to the British electorate is that they will keep foreigners out.

It was with this slogan that Boris, Clueless and the rest of the now governing Tory Party won the Brexit debate in which they lied to the public, saying that Turkey would join the European Union and flood Britain with Turkish immigrants.

It is ironic that Clueless and even Rishi Sunak and other ‘ethnics’ are happily, ambitiously and self-seekingly in a government that won its election on open xenophobia and racism. (No doubt they will protest they didn’t, that they won on some high-minded principle, but I would challenge any of them to appear before the supreme court of Logic and Truth!).

The number of immigrants crossing illegally may be a drop in the ocean — and let’s hope Clueless doesn’t formulate some idea of telling the British coastal forces to drop them in it — but it’s important for her and her government to impress a whole phalanx of British voters who support it that something is being done to keep them out.

My ‘ho ho’ response is prompted by the fact that Clueless and this government are now hopeful of talking to the French government, members of the European Union, which has a policy on immigrants entering Europe, to ask them to stop refugee and asylum seekers from leaving French shores.

Having fought for and achieved Brexit, Clueless has no recourse to the EU rules that govern the arrival and accommodation of asylum seekers.

After Brexit, which she and her government so dishonestly touted for, Britain can’t invoke the EU rule which says that the first country in which aspirant refugees arrive has to assess and even accommodate them.

The appeal to the French government to help Clueless and BoJo to control this trickle of immigrants is causing some entertainment amongst the French authorities. If they do nothing, the consequent effect in Britain should be a realisation that the Brexiteer slogan, perpetrated by the likes of Clueless and BoJo, of ‘take back control’, was a confidence trick.

The French are not about to make a deal.

I don’t know what the French equivalent of ‘ho ho’ is, but I am sure there is in Paris, not lost in translation, appropriate laughter and derision.