Dhaka and Beijing have agreed to elevate ties to sort of a strategic partnership to cover defence or security-related issues. 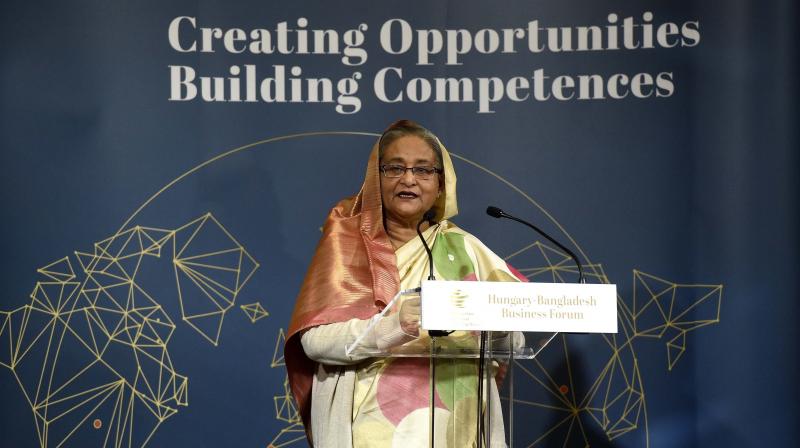 Directly or otherwise, China has once again been drawn into the vortex of the highly competitive military politics in the Indian subcontinent with Beijing recently selling two Type-035 (Ming)-class diesel-electric submarines to Bangladesh. Dhaka took delivery of the two subs on November 14, that cost the over-populous nation $203 million. This is the first induction of any submarine into the Bangladesh defence forces, a move Dhaka feels would boost its naval power in the Bay of Bengal.

The obvious question that arises is: what has been Dhaka’s provocation that it had to buy submarines armed with torpedoes and mines, capable of targeting enemy ships and submarines? Dhaka would like to argue that it needs a strong Navy to defend the resource-rich Bay of Bengal. In fact, after a UN tribunal settled Bangladesh’s long-standing maritime border disputes two years ago with neighbours Myanmar and India, Dhaka has been getting ready to engage multinational companies to explore for oil in the Bay. The tribunal’s verdict in favour of Bangladesh has ensured the country’s sovereignty over 111,631 sq. km (43,100 sq. miles) of sea, an area that almost equals the country’s total landmass.

The expensive acquisition by Bangladesh is significant because the country is surrounded on three sides by India, a friendly neighbour. Does it mean Dhaka is preparing itself to use these military hardware as a possible deterrent should the need arise or is it simply a demonstration (primarily to its domestic constituents) of its transformation into a country that is on the fast-track of development with a steady six per cent growth rate?

Opinion in India varies from that of concern at Dhaka’s move to the “take it easy” types. However, the common refrain seems to be that New Delhi should keep a close watch at developments to make sure Beijing does not secure strategic benefits out of this. Basically, those sounding the cautionary notes mean India should deny China any scope to extend its so-called “string of pearls” strategy in the Bay of Bengal. The reality, of course, is that China will come to have its footprint in the area automatically because training and maintenance of the subs will be Beijing’s responsibility for quite some time.

The October visit of President Xi Jinping to Bangladesh, too, is a development that cannot be missed because it was the first visit by a Chinese head of state to Dhaka in 30 years. After meeting Prime Minister Sheikh Hasina, Mr Xi said they would increase high-level of exchanges and strategic communication under the new partnership so that the bilateral relations “continue to move ahead at higher level”. This means Dhaka and Beijing have agreed to elevate ties to sort of a strategic partnership to cover defence or security-related issues, besides, of course, other critical bilateral subjects like education, health and economic matters, including trade and investment.

It is important for New Delhi to note that Bangladesh has been expanding its defence capabilities in recent years. It has been building a new airbase close to adjoining Myanmar, besides setting up several new military cantonments across the country and adding new frigates to its naval fleet. Moreover, there have been regular Chinese transfers to the Bangladesh Navy but the recent transfer of the two submarines clearly indicates there has been an upscaling of such transfers. One cannot also lose sight of the fact that in 2013, Dhaka had signed a billion-dollar deal with Russia to buy fighter training jets, anti-tank missiles and helicopters.

It is surprising that despite India-Bangladesh ties being on a high ever since the Narendra Modi government assumed office in 2014, New Delhi has made no visible demonstration of urgency in boosting security and defence cooperation with Dhaka. Therefore, defence minister Manohar Parrikar’s visit to Bangladesh in end-November, although a tad late, has generated interest. Mr Parrikar met Ms Hasina as well as the Bangladesh President and is said to have prepared the ground for the two nations to sign the Defence Cooperation Agreement during the Bangladesh Prime Minister’s visit to India soon. What also cannot be missed is that it was the first visit by an Indian defence minister to Bangladesh in 45 years.

Ironically, India and Bangladesh are also said to have deliberated on issues of naval cooperation, besides discussing the possibility of coordinated patrolling along International Maritime Boundary Line (IMBL), and engaging in bilateral maritime exercise, collaboration in hydrography and joint surveillance of the exclusive economic zone. It remains to be seen if all these subjects get reflected in the proposed Defence Cooperation Agreement between the two neighbours. Of course, India is already planning to supply offshore patrol vehicles to Bangladesh with an easy financial package as part of the defence cooperation. It is all right if Dhaka boosts its Navy. In fact, this is part of the Sheikh Hasina government’s plan for an overall modernisation of the Bangladesh armed forces initiated in 2009. It is also not surprising to see Dhaka’s military spending rise from $916 million in 2004 to $2 billion in 2014. But, for New Delhi, the key concern would be to make sure Bangladesh does not come under China’s grip.

In what could be a normal bilateral decision, although it might look like a counter-hedging strategy, India would start training Vietnamese fighter pilots on its Sukhoi Su-30MKI “air dominance jets” from 2017. The Indian Navy is already training Vietnamese sailors in operations aboard Kilo-class submarines for the last three years. New Delhi’s decision on this high-level defence cooperation on China’s backyard has certainly irked Beijing, but the latter holds no moral right to actually protest. This decision follows Prime Minister Modi’s visit to Vietnam in September to “elevate” the 2007 bilateral “strategic partnership” to a “comprehensive strategic partnership”.

This is significant because both New Delhi and Hanoi are concerned and wary about China’s assertive posturing in the Asia-Pacific region.

India has been demonstrating its soft power strength in the neighbourhood for long, but it is perhaps time to also show it is capable of strategic military cooperation. The initiative with Vietnam is a good example to showcase just this. In fact, the defence secretaries of India and Vietnam are to meet in early-2017 to list out military projects and equipment under the new $500 million defence line of credit announced by Mr Modi during his Vietnam visit. By the way, India is also believed to have offered to supply Vietnam the BrahMos supersonic cruise missiles, Varunastra anti-submarine torpedoes and other military hardware and software.

The game in the Bay of Bengal could actually make the seas as well as the region a highly contested space in the days ahead.