The Trump, Putin drama: A tragedy or a farce?

Ingrained hostility between Moscow and Washington is obviously not a desirable state of affairs. 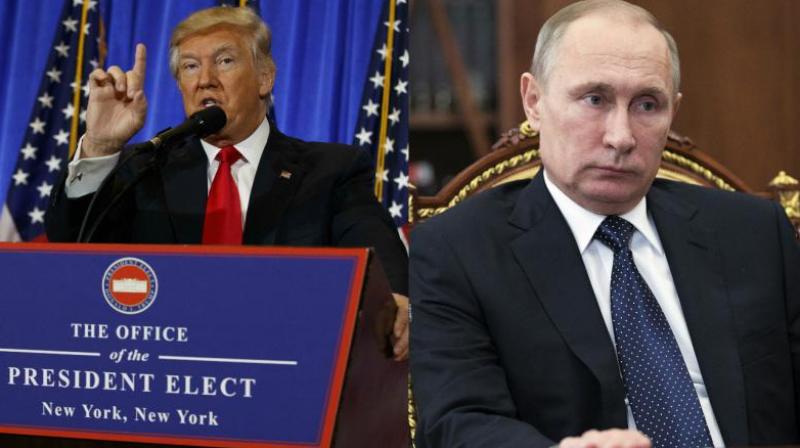 People who are pumped up about the prospect of a Trump presidency fall broadly into two categories.

Most of those who voted for the property magnate and TV show host and many of those who backed him from afar believe — or at least hope — Donald Trump will do some good, if not on an international scale or even for his nation as a whole, then at least for specific segments of society (supposedly beleaguered white males, perhaps, or struggling billionaires). And, who knows, he might even make America great again.

The second, smaller category of Trump enthusiasts consists mainly of those who expect the incoming commander-in-chief to personally deliver the coup de grace to a terminally ailing republic. They expect the nation under Trump to show its true colours and, as a consequence, quite possibly self-destruct.

There should be no prizes for guessing which of these camps Vladimir Putin, who has made no secret of his glee at Trump’s triumph, belongs to.

More or less all US intelligence agencies concur that it was Russian hackers who infiltrated the database of the Democratic National Committee and, directly or otherwise, shared the fruits of their labour with WikiLeaks.

The extent to which the latter’s dissemination of campaign manager John Podesta’s emails in particular contributed to Hillary Clinton’s shortfall in the electoral college is undetermined and quite possibly indeterminate. It is perfectly conceivable that FBI director James Comey’s announcement of another email investigation did more last-minute damage to the Democratic candidate’s prospects.

At the same time, there is merit in the argument that Democrats have latched on to the Russian hacking story partly as a means of banishing memories of key campaign inadequacies whereby Clinton lost key states despite winning the popular vote by a substantial margin.

The declassified information made available by the intelligence agencies falls short of being indisputably conclusive. Perhaps the classified briefings to senior officials, including the president-elect, effectively clinch the question of the source of the hacking, although the attribution of personal responsibility to Putin for directing the operation is likely based on reasonable conjecture rather than verifiable evidence.

Overall, the official American version is by no means impossible to believe — even though one must admit the validity of the charge on which Trump, notwithstanding his motives, bases his scepticism: namely the same agencies’ “slam dunk” conclusion that Saddam Hussein possessed weapons of mass destruction. Sure, they didn’t really believe that but ultimately offered up what the incumbent administration wanted to hear. Has something similar happened again?

It’s a valid concern but there is nonetheless something extraordinary about an incoming President attaching greater credence to assurances from the Kremlin than to the conclusions of his nation’s intelligence agencies. And if Putin can almost effortlessly outsmart the Obama administration, as he did in refusing to retaliate after the US expelled 35 Russian diplomats over the hacking controversy, no one should be particularly surprised to find him salivating at the prospect of a Trump presidency.

In terms of temperament, the long-standing Russian incumbent and his soon-to-be American counterpart are poles apart. Even the Machiavellian streak that they appear to share manifests itself in very different ways. Putin, the lowly KGB operative who ruthlessly insinuated his way into the Kremlin (after direct US interference succeeded in securing a second term in office for the ailing and often inebriated Boris Yeltsin), is a master of the long game.

Trump’s notoriously constricted attention span, reflected in a tendency towards policy pronouncements restricted to 140 characters, is supplemented by a Manichaean worldview whereby, at least for the time being, Russia can do no wrong and China can do nothing right.

Exactly how — and for how long — the Vladimir-Donald bromance will play out on the world stage remains to be seen, of course. Many of Trump’s Republican colleagues have a far less benign view of Moscow’s machinations, in some cases as a consequence of residual hostility to all things Russian derived from an unreconstructed Cold War mentality (the equally absurd counterpoint to which is the tendency among some in the international left to gaze at Putin’s fiefdom through spectacles clouded with nostalgia for the Soviet Union.)

Ingrained hostility between Moscow and Washington is obviously not a desirable state of affairs.

It’s not without cause, though, that Putin and Trump share an expanding fan club across the European far-right landscape.

Anyhow, it should become clear before too long whether the unfolding drama is likely to be the 21st century’s defining tragedy, a vulgar comedy, or merely an intermittently entertaining farce.