Wilima Wadhwa
The writer is director of the ASER Centre, run by NGO Pratham, and is a member of several government committees.

According to Unesco, in the beginning of April 2020, schools had closed across 194 countries, affecting 1.6 billion learners 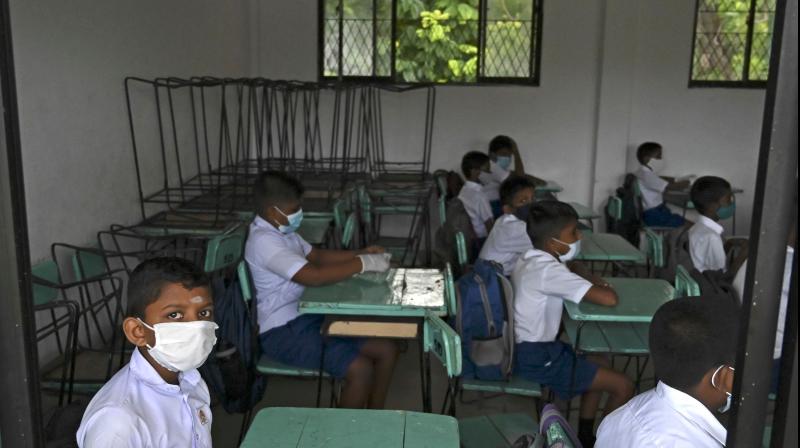 Students wearing facemasks sit in a classroom after their school was reopened in Colombo, Sri Lanka. AFP Photo

Six months into the Covid-19 pandemic, no one will dispute that its impact has been universal -- across all countries and across all sectors.  Like other sectors, in education too, the impact of Covid-19 is going to be huge and will have long-term implications.

According to Unesco, in the beginning of April 2020, schools had closed across 194 countries, affecting 1.6 billion learners, constituting 91 per cent of all enrolled students.  Even today, with schools reopening in some countries, 1.1 billion learners are still affected.

Psacharopoulos, Patrinos, Collis and Vegas estimate that the impact of these four months of school closures could be as much as $10 trillion for the world as a whole, in terms of the loss in lifelong earnings of this entire generation of students.

What makes the situation far worse is that the adverse impact of the pandemic has been much greater on already vulnerable and disadvantaged groups -- this is true within countries as well as across countries, in that developing countries are likely to be worse hit economically as compared to the developed ones.

And in education too, equity is going to be a big issue.

Not surprisingly, learning levels are lower in the global South, and within these countries among the poorer and disadvantaged groups.

In India, Pratham has, through its Annual Status of Education Reports (ASER), been focusing on basic reading and arithmetic since 2005.

Year on year, ASER shows that large proportions of children are more than two grades behind in these foundational skills that we expect them to acquire in the first three years of primary school. For instance, even in 2018, 73 per cent of children in Class 3 and 50 per cent children in Class 5 were unable to read a Class 2 level text.

ASER data as well as other available research shows that if children do not acquire basic foundational skills in primary grades, when they are supposed to, they will complete the mandated years of elementary schooling without adequate “value add” in terms of years of learning.

This situation is not unique to India.  Similar situations exist in many other developing countries as well. The inclusive nature of the ASER architecture and the simplicity of its approach resonated with many in other countries of Asia, Africa and Central America.

Today, ASER-like initiatives are being done by organisations in 12 other countries -- Kenya, Tanzania, Uganda, Nigeria, Mali, Senegal, Mexico, Pakistan, Mozambique, Bangladesh, Nepal and Nicaragua. Each country adapted the ASER tool and the approach to their context, with the common thread being that all countries focus on foundational reading and arithmetic.

However, since the specific items used were different, estimates from these assessments, that touch almost a million children, could not be easily compared across contexts.

Led by the work done in India by Pratham and ASER, this consortium of organisations, known as the PAL Network, has now launched a foundational assessment in maths -- International Common Assessment of Numeracy (ICAN) -- that uses the same items across all countries. ICAN includes simple tasks in the domains of number knowledge, measurement, geometry and data display.

The assessment is aligned to Unesco’s Global Proficiency Framework for SDG 4.1.1(a) for Classes 2 and 3. A pilot assessment in one district of each of the 13 countries (including India) was done in 2019 and the report was launched earlier this week.

ICAN is an open source oral one-on-one assessment, available in 11 languages, aligned to the measurement of SDG minimum proficiency, that is easy to implement and scale up.

In the context of the current pandemic-related crisis, it becomes even more important to understand where children are with respect to basic reading and arithmetic skills. As schools start to open up, the first job of the day will be to assess where children are at and how much ground has been lost.

It is imperative to do this so that children can catch up and the learning loss accrued during this period of school closures does not result in persistent deficits. Younger and children at the lower end of the learning distribution will need special attention.

One-on-one, activity based, simple assessment tools like ASER and ICAN are ideal for the situation since they are not only easy to implement and scale up but also provide evidence that is actionable for improving children’s learning.

As part of the team that launched the ASER effort in India 15 years ago, we are excited to see that a citizen-led effort that started in the villages of India has now become an international people’s movement.

A tool that originated from work done by citizens in developing countries may help the world’s educational systems devise solutions in this period of global crisis.