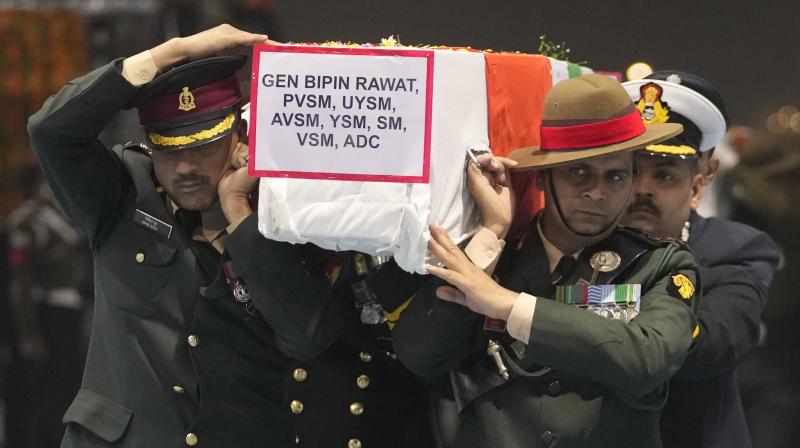 The tragic death of Chief of Defence Staff Gen. Bipin Rawat in a freak helicopter crash near Coonoor in Tamil Nadu’s Nilgiris on Wednesday is a major blow to the security establishment of the country at a crucial transitional time.

It is a transitional time in two senses. First, India is moving towards a unified command of all the three wings of the defence services for the first time, and the new set-up has not yet become the norm. It will of course happen in time after the succession to the post of CDS becomes a smooth, routine affair, when representatives of all three services occupy the post, and help in the integration and evolution of the unified command system.

Though it had been conceptualised and deliberated upon for nearly two decades by successive administrations, it was the Nare-ndra Modi government which decided to make the change and create the Central Defence staff, and named Gen. Rawat as its first chief. Gen. Rawat, on his part, took to the job with a natural flair.

He began to articulate what the change meant. Gen. Rawat had tried to infuse new thinking that comes with institutional change. He had sought to show that each of the armed services needed to view a future war as one force, and the role of each wing was also modified by the changes in technology and the new weaponry that comes with it. For example, he tried to show that air power did not necessarily mean more squadrons of fighter planes because the missile systems have changed the concept of attacking enemy targets. It is no doubt a debatable idea, but Gen. Rawat mooted it with clarity. There has been some opposition to it, which is but natural.

The Indian armed forces have been looking at the prospect of fighting a two-front war with Pakistan and China simultaneously. But no clear ideas have emerged in this matter. It is possible that various scenarios in different theatres have been worked out, and with the caveat that they need constant modification depending on the enemy positions. In diplomatic parlance, China and Pakistan are neighbours, with whom India would strive to have friendly relations. But in terms of national security, the two countries are potential enemies.

The second sense of transition is that of the changes in the global security scenario and India’s role in it. This requires a worldview that goes beyond the devising of war scenarios.

Despite the apprehensions of Pakistan, the Western world led by the United States perceives India as a military power of importance. This was a role that Pakistan had played during the Cold War in the 1960s. Today, India, with its much larger economy and the clout that comes with it, has become an important player in global strategic affairs. This demands that India’s thinking on security expand. India’s membership of the Quad, that includes the United States, Japan and Australia, though not an explicit military formation, has significant military implications.

Gen. Rawat well understood the need for India to think about the global strategic scenario. Like a good soldier, he took the ideas that are now in vogue, and tried to understand the situation with the aid of those ideas in India’s strategic neighbourhood which lies beyond its national borders. In a speech delivered at the India International Centre in New Delhi a few months ago, he used the 1996 Samuel Huntington thesis of the clash of civilisations along religious fault lines, and tried to read the emerging scenario.

Keeping in mind China’s close ties with Pakistan, and Beijing getting closer to Iran even as it faces a hostile United States, Gen. Rawat argued that China will align with the Islamic countries in its fight with the West. The argument becomes more plausible with China’s getting closer to the Taliban regime in Afghanistan. Of course, he had not filled in the gaps in his thesis. He did not spell out whether the West connoted Christia-nity, and what the place of Jewish Israel and “Hindu” India would be in the polarised Christian-Islamic world.

There is plenty to argue and differ with Gen. Rawat’s worldview, and we are not even sure that this was indeed his settled view. Many in India have mocked the Huntington thesis, less on strategic grounds and more on an ideological basis. It does not require much hard thinking to see that the global strategic scenario does not lend itself to Huntington’s simplistic thesis.

With the Abrahamic Accords between the Gulf Arab countries and Israel, and the perception of Iran as an adversarial regional power by the Arab leaders, the conflict of civilisations thesis looks hopelessly inadequate. But Gen. Rawat dared to have a global view of the matter, which is what is requ-ired of India’s strategic experts. Gen. Rawat showed that this is indeed part of the job of the Chief of Defence Staff.

It is possible to infer that Gen. Rawat’s worldview reflects the Hindutva outlook of the right-wing BJP government of Prime Minister Narendra Modi. On the face of it, that may well be the case. But a closer analysis would show that Gen. Rawat tried to infer a trend based on China’s diplomatic and strategic alignments. We cannot, however, argue that Gen. Rawat was a Hindutva ideologue. We cannot say if he subscribed to ideology as such.

The Narendra Modi government has the difficult task of selecting Gen. Rawat’s successor as CDS. Perhaps it may nominate the Army’s Gen. M.M. Naravane, currently the senior-most of the three chiefs, or it may choose someone from the Indian Air Force or the Navy. But seniority cannot be the only criterion. The CDS is required to bring both leadership and intellectual capabilities to the post. The more important task of the government and the future CDS would be to strengthen the idea of unified command and its smooth functioning. The rotation of the CDS among the three services would be an effective administrative solution. And it can be argued that the priority at this stage is the crystallisation of the idea of a unified command more than a worldview about the global strategic scenario. Gen. Rawat’s successor as CDS should continue with the views that the late general had sought to develop and modify them as one moves on. The need for continuity is quite crucial in these early stages of moving towards a unified command.