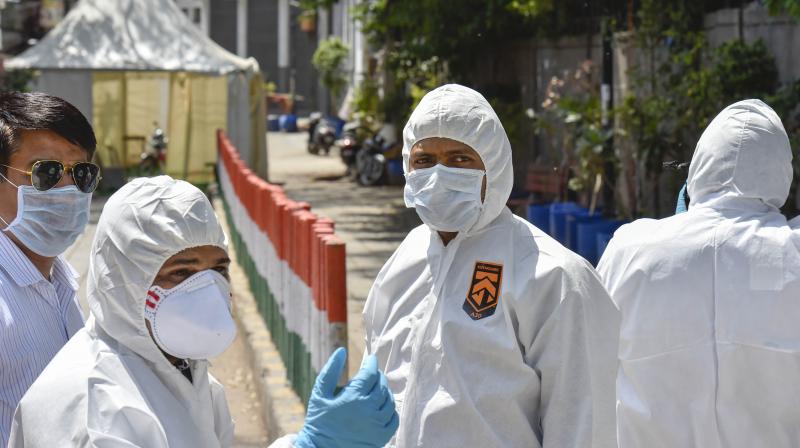 Forensic officials arrive at Nizamuddin Markaz to conduct an investigation into the spread of the Covid-19 coronavirus at a congregation organised by the Tablighi Jamaat in mid-March. (PTI)

The facts, however unexciting, are really the key. The Sars-CoV-2, or Covid-19, did not emanate from the annual gathering of the Tablighi Jamaat held at its centre in New Delhi’s Nizamuddin area between March 13 and 15.

The virus sneaked in because many participants in the event had travelled from Malaysia, and many among them were from Malaysia and Indonesia, and they must have arrived in New Delhi sometime in the first half of March when the government and the experts were not quite sure how the virus will play itself out in India because many other countries, especially in Europe, were already in its vice-like grip.

So it is understandable that these Tablighi Jamaat travellers from Malaysia were not tested rigorously at the airport. Many of them dispersed across the country after the meeting because the Covid-19 alarm had not yet been rung by the middle of the month. That happened only after March 20.

A blessing in disguise

When the Tablighi Jamaat centre was found to house nearly 2,000 members inside its premises on March 30, after the lockdown had begun on March 23, it should not have come as a surprise to anyone. The Tablighis just stayed where they were as the lockdown began, and train, bus and air travel were suspended.

This in fact turned out to be a blessing in disguise because they could then be tested and quarantined, which was better than if they had melted away. The major death toll has also been from the congregation, including six in Telangana and one from Jammu & Kashmir. It has also been possible to trace the over 20,000 contacts of the congregation. Those who have tested positive among them now number more than a thousand, from the total tally of more than 5,000.

The fact that the Tablighi Jamaat is not a secret organization, and that its members can be easily identified because of their peculiar attire and that they stay in mosques, has helped in tracking them down. The misbehaviour of Tablighis cannot be glossed over either, but it is nothing but the obduracy and idiocy of blinkered minds rather than that of jihadis. They have been taken to task as they should be.

Prejudice in the media

The fury of prejudice that has been unleashed in the media, especially the tabloid television news channels, was based on the large numbers of Covid-19 positive cases that emerged from among the Tablighis. The fact that the Tablighi travellers were carrying the virus without being aware of it -- most of them tested positive but they were not active -- was glossed over and the majoritarian spinmeisters grabbed the issue with a vicious glee. They argued from the case that many militant jihadi groups had Tablighi recruits, and that the minor explosion of Covid-19 among the Tablighis in New Delhi was a diabolical conspiracy to spread it across the country as many of international jihadi groups, especially those operating from Pakistan, consider India to be enemy territory.

This was a toxic concoction, and there was no need for forensic proof to establish its veracity. The media savonarolas worked themselves into self-righteous rage and accused the Tablighi gathering for spreading the virus, which is a half-truth at best. But half-truths have their diabolical uses.

The Tablighis are looked down with contempt by the genteel classes of Muslims because of the inevitable class bias. Most of the Tablighis come from lower income groups. The poor among the Muslims have no use for the Tablighis because religiosity is an irritant when you are struggling for survival from day to day. The Tablighis are of no consequence in the larger Muslim community. But those fighting what they consider to be the jihadi danger like to blur the lines between poor Muslims and Tablighis, between well-off Muslims and Tablighis, and between Tablighis and the jihadi extremists. There is no room or time to make distinctions when you are fighting a propaganda war.

Interestingly and surprisingly, or perhaps not so surprisingly, the anti-Tablighi media combatants are partly fighting the religious fanaticism of the jihadis from a secular standpoint. And the same combatants are also fighting secularism and all those who are secular as they believe that secularism is a Communist conspiracy. While appearing to be fighting against the religious superstitions of the Tablighis, the anti-Tablighi media warriors are fighting for undeclared Hindu piety in the name of nationalist sentiment. It is more than a sleight of hand. It is as a matter of fact transparent majoritarian prejudice in full display.

The Narendra Modi government has maintained a scrupulous silence about the Tablighi issue. The official at the daily briefing spelt out in neutral tones the impact that the Tablighi positive cases and deaths had made to the total number of infections and fatalities. No one in the media had bothered to ask about the anti-Tablighi campaign that was raging in parts of the  media in the way that US president Donald Trump was confronted by some White House reporters at the daily press briefing about the impact on the Chinese in America when the coronavirus has been described by Trump as the 'Chinese virus', and he later came out in support of the American-Chinese. Until now no responsible political leader from the government has bothered to clarify this matter. RSS joint general secretary Manmohan Vaidya has blamed the Tablighi leaders for not putting off the meeting, but he clarified that the Muslim community had nothing to do with the Tablighi Jamaat’s indiscretion.

With the Hindu right-wing BJP in power, the Hindu right-wingers would not want to let go an opportunity provided by the Tabligh episode to spread the anti-minority message in the garb of fighting jihadi terrorism. This is politics as usual even at the time of a national medical emergency. The BJP and its supporters hope to reap the benefits in a future election. And it is unfair to blame them for doing their bit. But the facts will ultimately trump rhetoric and prejudice. The media furies of today will look quite foolish a year from now as India and the world are engaged in the serious battle against the Covid-19 pandemic.