By failing to unite, Oppn seems to forget history

The test before the Oppn parties is to at least get the narrative right even though they appear to have failed in getting their arithmetic right. 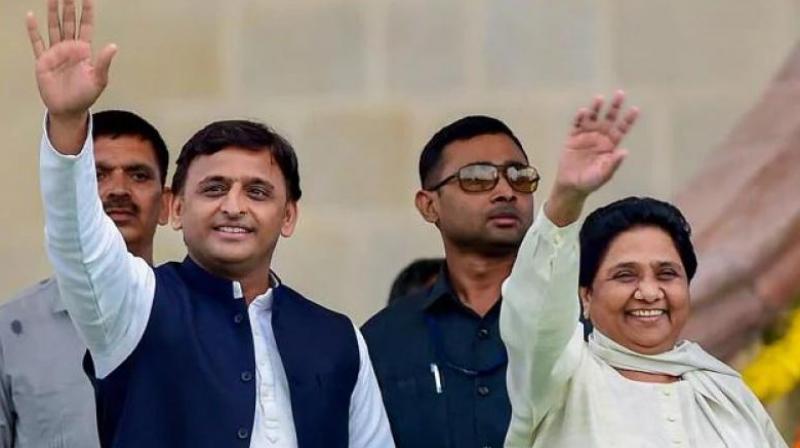 Shortly after 9 pm on Thursday, the Congress Party released its first list of candidates for the impending Lok Sabha elections. By unexpectedly announcing 15 of its candidates even before the Election Commission has announced the dates of the polls, the Congress wished to be the first to get off the block. Significantly, 11 of the names in the list were from Uttar Pradesh and their declaration has virtually ensured that the contest in the state would be triangular.

Hereafter, it would require an exceptional spirit of accommodativeness on the part of the Congress on one hand and the troika of Mayawati, Akhilesh Yadav and Ajit Singh on the other, to forge a “Mahagathbandhan” on the lines cobbled up in Bihar for the 2015 Assembly polls. This development has taken place close on the heels of the Congress Party’s questionable behaviour in Delhi. In the nation’s capital, the party peculiarly handed its reins back to the ageing warhorse, Sheila Dikshit, and in the popular perception the one who pressed for the party’s move to not align with the Aam Aadmi Party.

Yet, the decision would be as much Congress president Rahul Gandhi’s and such a ploy does not cut ice with the other parties — it is clear that the party consciously decided it would not enter into alliances in Uttar Pradesh, Delhi, Punjab, Rajasthan, Madhya Pradesh and Chhattisgarh. Some months ago, Mamata Banerjee had proposed the “one-is-to-one” formula under which the Opposition parties were to strive towards the ideal of putting up one candidate per constituency to prevent the division of the anti-BJP vote. This proposal now lies in tatters and there is no knowing, even in West Bengal, if the contest will be quadrangular, triangular, or tactically bipolar. Although the Congress has in recent days sewn up alliances in some states — the ones in Karnataka and Maharashtra being the most important — it is certain that the BJP’s voteshare-to-seat-conversion ratio shall remain high because of the division of anti-BJP votes in several states, most significantly in UP and small sub-regions in the other Hindi heartland states.

This is due to the fact that while all Opposition parties have publicly declared the defeat of the Narendra Modi government as their primary objective, they behaved quite differently in practice. In some cases, they even betrayed their real purpose — for instance when Rahul Gandhi announced the appointment of Priyanka Gandhi Vadra as the general secretary for eastern UP, he affirmed that the party’s real target was the Assembly election in 2022. The Congress is well within its rights to assess that its political dominance of yore shall remain a pipedream unless the party became a serious political player in UP, and if it was not relegated as the third player in a battle between the three players in Delhi.

The question, however, is when should a party prioritise this target. Was this the right time to strategise for the medium-term or the long-term when the immediate survival of the Opposition parties as legitimate political forces would be questioned by the BJP in the event of its returning to power? Events over the past five years should have warned the Opposition that the right to disagree with the government — or even the ruling party — has been delegitimised in social discourse, resulting in a unitary viewpoint.

The Opposition parties seem to have forgotten a lesson from history — in 1989, the Congress Party under Rajiv Gandhi was defeated mainly as a result of his divergent opponents tactically refraining from contesting against each other despite their fundamental ideological differences. In large parts of North India, there were several instances of the V.P. Singh-led Janata Dal making seat adjustments with the BJP on the one hand and with the Left parties or those inimical towards the saffron party on the other hand. In the present situation, nothing prevents the Congress from being the bridge between the Trinamul Congress and the Communists in West Bengal. What prevents the Congress from making adjustments in some seats with the Trinamul Congress on the one hand and with the Left on the other, and for each of them to accept the arrangement? It is no different in some of the other states.

The absence of a federal pre-poll alliance will also have major implications in case of a hung Parliament, and the President using his discretion to decide who should be invited first to form a government and prove its majority within a stipulated period. Besides their failure to forge alliances, the Opposition parties have lost the political momentum after the Pulwama terrorist attack and the subsequent airstrike in Balakot and the dogfight in the skies the next day. Prime Minister Narendra Modi has somewhat regained media and mind space with ceaseless utterances using a vocabulary of retribution where emphasis has been on pledges and not on providing answers to questions being raised in the wake of these incidents.

As seen during the 2014 campaign, Mr Modi revels in playing the victim card. This time he has chiselled past reasoning to claim that anti-Modiism was effectively anti-nationalism. It has not helped that some so-called “experts” on Pakistan’s television channels have credited the Opposition parties for their joint statement accusing Mr. Modi of politicising the airstrikes. No Opposition leader has countered that by using the political discourse across the border for his benefit, Mr Modi is embarking on the same path of becoming a failed democracy where words are used not for their true meaning but for their resonance.

For the coming election to be politically legitimate, it is important for the Opposition to rediscover the confidence in the discourse that they were building prior to the Pulwama terrorist attack. The challenge is to argue that while countering terrorism should be prioritised in this moment of challenge for the Indian State, livelihood concerns and social security matters cannot be taken off the shelf. The test before the Opposition parties is to at least get the narrative right even though they appear to have failed in getting their arithmetic right.