The new CM could hardly have been more unembarrassed and forthright, or less boastful of placing deceit in the service of his ambition 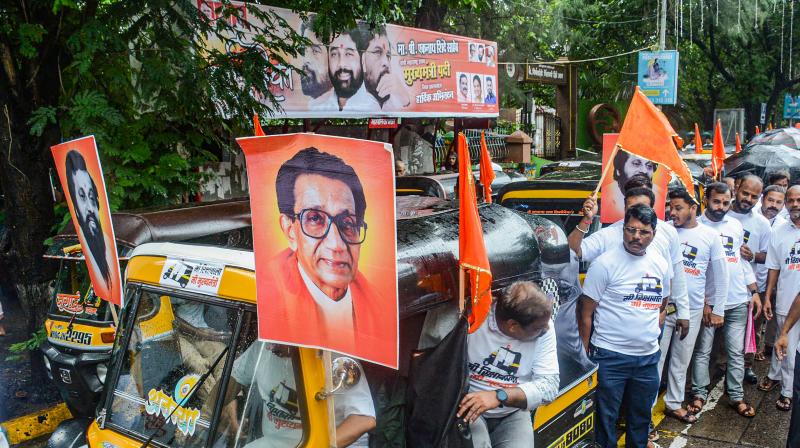 Recent developments in Maharashtra, which saw carefully plotted wholesale defections which brought down the Uddhav Thackeray government, are laden with ironies. Perhaps this is best exemplified by the BJP turning a Shiv Sena loyalist into a “vibheeshan” (spy within) who, in his own words, worked in secret “when they slept, and before they awoke” -- truly a poetic ode to treachery.

The new chief minister could hardly have been more unembarrassed and forthright, or less boastful of placing deceit in the service of his ambition. Eknath Shinde’s accomplices were initially coy. But once power was legislatively seized, BJP leader and former CM Devendra Fadnavis put his cards on the table. He said the BJP had worked to remove a “corrupt” government, which was at odds with the line taken by the incoming CM.

To justify his back-stabbing, Mr Shinde sought to emphasise ideology. He claimed his predecessor, Shiv Sena chief Uddhav Thackeray, was taking the Sena away from the path of Hindutva. But in the same breath the CM gave the game away. He summoned the class divide by declaring that a “chaiwalla” or “autowala’s” son (meaning himself) had as much right to be leader as those born with a silver spoon in their mouth, meaning Mr Thackeray. Basically, the CM refashioned in the BJP’s mint is shooting every arrow in the quiver to make at least one stick with the Sena’s mass membership.

The manoeuvres on display so far point to the lower depths of the still unfolding narrative. The Brihanmumbai Municipal Corporation polls in September may help us better gauge where the Sena rank-and-file stand -- with Uddhav or the carpetbaggers. If Mr Thackeray is left holding the shorter end of the stick, and Mr Shinde gains, the BJP would do well to be forewarned as far as their new ally is concerned. In the hands of the ambitious, deceit can be the currency of choice.

However, since the BJP, far from being a pushover, has shown itself to be a past master of the dark arts and thrives on principles that are the exact opposite of those Prime Minister Narendra Modi often espouses in the domestic and international arena, Maharashtra may experience a bumpy ride to the next state (and national) election in 2024 as allies in the E-D (“Eknath-Devendra”) seek to show who’s stronger in case the Shinde group wins the trophy in the September polls.

In such circumstances, if the Uddhav faction, NCP and Congress (MVA) are able to practise the virtue of unity, and can present a confident face to the electorate, they will do themselves and the state a favour. Few things are more attractive in a democracy than a composed Opposition.

If, on the other hand, Mr Thackeray and his MVA allies can pull off a worthwhile show in the BMC polls, the current CM and his defector MLAs will have to entertain serious anxieties. In this scenario, the Sena ranks could mount tremendous pressure on the defector MLAs. That, ironically, would be the realisation of a democratic praxis, and mid-term elections may not be too distant.

While the war for supremacy rages within the Sena, it will be interesting to see how the BJP-RSS deploy their resources to draw Sena adherents into their own fold, as they have done with smaller groups and parties, or

even larger opponents, in many parts of India, like the Northeast, Uttar Pradesh and Madhya Pradesh, where another Shinde (Jyotiraditya Scindia) played the Trojan horse.

It’s plain to see that the BJP is using Eknath Shinde as a cat’s paw to gobble up the Sena, leaving the Thackerays high and dry. Uddhav must be broken if the Shiv Sena, founded by his father Bal Thackeray in 1966, is to be bent and broken.

That’s the real equation. Mr Minister Shinde is incidental in the wider scheme. If the Sena can be dismantled, the NCP and Congress too can be left chasing chimeras.

For some years, the BJP has tried to be the “elder brother” in relation to the Sena in Maharashtra, reversing the past story. This seems to have been the main reason why Uddhav broke away from his party’s alliance with the BJP that came to fruition under his father, and began a phase of transition politics with secular allies NCP and Congress.

While Left parties (including Communists) in all their shades have been studied closely worldwide, especially since the start of the Cold War, after the defeat of fascism in Europe, scrutiny of parties of the atavistic or nativistic Right have drawn relatively lesser attention, although the political challenge posed by the Muslim Brotherhood and Islamist tendencies to despotic and secular regimes alike in Islamic societies -- deploying a range of socio-religious mechanisms, when not outright political ones -- has engaged Western scholarship.

Maharashtra offers scope for examining the dynamics of the parties and tendencies of the Right, as seen through the Shiv Sena-BJP prism. The state is of especial interest when looking at serious competition among the right-wing that feed off the religion factor.

The Sena was seeded through the Congress’ aegis to thwart Communists led by S.A. Dange in Bombay’s working-class movement. Bal Thackeray used the instrument of Maratha regional pride to trump Communism as an ideology, first drawing in the working class and subaltern sections, and then the middle classes and others.

The party transmuted and combined religion politics alongside Maharashtrian sub-nationalism. It could then dominate the Jan Sangh-BJP on the religious Right. Subsequently, the BJP-RSS gained ground nationally and the Sena’s vote share dipped. This is the background to the Sena under Uddhav Thackeray searching out new allies in the NCP and Congress.

Unlike the RSS-BJP, the Shiv Sena had begun life on anti-Communism and parochial pride, not religious bigotry. Also, unlike the RSS, it did not have a worked-out ideological system with texts, exegesis and masters. Thus, in its new phase, which started only three years ago, at least in some respects under Uddhav Thackeray the Shiv Sena began to resemble the Ennahada Party of Tunisia -- which began as an Islamist tendency faintly coloured by Muslim Brotherhood ideology.

Firing the first volley of the Arab Spring in 2011, Tunisia ejected its dictatorial regime and the Ennahada avidly sought to combine with secular and Left parties to offer democratic stability in government. The experiment is ongoing. Ennahada has renounced political Islam and the Islamist state as its goal, and pursues what may be called Muslim democracy. It will be interesting to see how far Uddhav Thackeray can go to stick with his secular allies. Maharashtra becomes a fascinating study.