The charges against the protesters include conspiracy, treason and abetting enmity between communities and castes 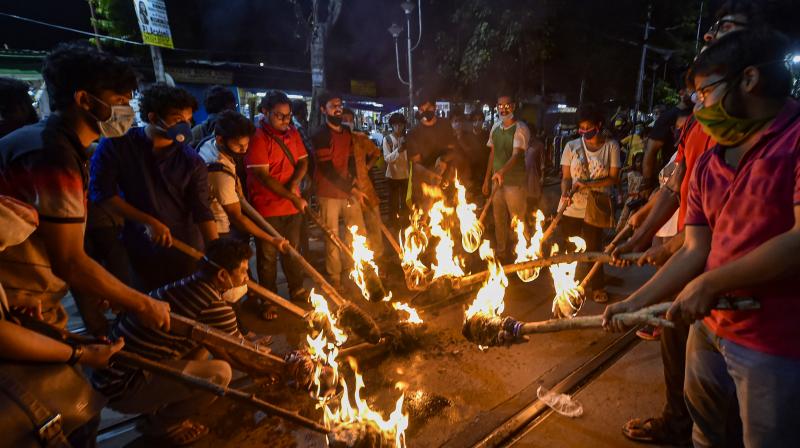 Students during a protest rally over the death of a 19-year-old Dalit woman who was allegedly gang-raped two weeks ago in Hathras. PTI Photo

The confusion behind the aggressive response by UP chief minister Yogi Adityanath’s government to the alleged gangrape-murder of a 19-year-old dalit girl in a village near Hathras is screamingly clear in the 21 cases filed against those who have protested, raised their voices against the venal crime against a member of an oppressed community.

The charges against the protesters include conspiracy, treason and abetting enmity between communities and castes. The chief minister had earlier said that those who are raising a hue and cry against the alleged rape-murder want to create obstacles in Uttar Pradesh’s progress on the economic front. The ironies and the half-truths and lies embedded in the argument against the alleged conspirators are much too obvious to have to be spelt out.

Apart from those who have been accused of the alleged rape-and-murder crime, the police had mishandled the case from day one. When the victim was taken to the hospital in Hathras first, then to the one in Aligarh, the medical reports from these two places should have immediately been dispatched for forensic examination, instead of waiting to do so for nearly two weeks.

The police had waited till the victim’s declaration before her death was recorded by a magistrate. And a heinous crime was committed by the police in hurriedly, and furtively, cremating the body in the dead of the night under the false presumption that a daytime funeral would create law and order problems.
The police making a statement based on the forensic report that there was “no rape” was a clumsy, shoddy attempt to play down the magnitude of the crime.

Chief minister Adityanath, along with so many of his colleagues in the ruling BJP in the state, at the Centre and in the country at large, believe that they do not owe any apology to the people when horrible crimes are committed against the weak and the innocent.

They have this misplaced notion of masculinity that expressing sympathy for the victims of crime, especially where the party is in power, is a sign of weakness and a confession of failure. This is a weakness that pervades across all BJP ranks, starting with Prime Minister Narendra Modi, home minister Amit Shah and chief minister Adityanath. It must be stated point blank that an expression of compassion and admitting to failure and mistakes is sign of strong people, and not of the weak. The aggression of the BJP leader is a symptom of cowardice, more than anything else.

The UP police’s counter-aggression carries signs of the BJP’s pathological belligerence. This is evident in the manner that the Delhi police, which functions under the control of Union home ministry, and therefore directed by Union home minister Amit Shah, approached the East Delhi communal riots at the end of February this year.

There was not a word of sympathy from Shah or anyone else for those killed in the riots and who suffered huge losses to property. The relentless attempt was to go after the supposed conspirators.

Though Shah, at the all-party meeting he convened soon after the riots, called for the setting up of peace committees, he is loath to voice concern and sympathy for the victims of the riots because a majority of the victims of the Delhi riots were Muslims.

What Modi, Shah and Adityanath need to do is to get rid of this macho attitude towards violence and reach out to the victims. Most of the protests by the Opposition parties over the Hathras case would have lost their credibility if the UP police and the
Adityanath administration had reached out to the family of the dalit victim. The Olympian attitude that the BJP does not look to the caste and community marker of the victim and that it treats all crime as just crime is simply hollow.

It is a good principle in the abstract, but in certain situations, it does not help in ensuring redressal when it comes to caste and gender. A dalit family in most parts of India is at a terrible disadvantage because of the upper caste bias of the police and the administration.

It is futile to pretend that there is no such bias. It is better to acknowledge the bias so that a conscious attempt is made to dealing with crimes against certain castes and communities. And it is the leaders at the top who should be taking the lead in the matter.
The only BJP leader who took a sensible and mature stance in the Hathras case was Uma Bharti, who wrote to chief minister Adityanath to allow Opposition party leaders to go to Hathras and meet the dalit family of the victim.

There are then two major blunders that the Adityanath government has committed. The first is the attempt to play down the magnitude of the crime. The first was the police statement based on the forensic report about it not being a rape, as though the brutal assault on a teenage girl which resulted in her death was no serious matter.

The murder does not become less of a heinous crime because the medical report found no traces of rape. The second folly of the police was to rush through the cremation, which should be treated as a crime because it was an attempt to suppress and destroy evidence.

Filing cases against those who protested, whether it was their business to protest or not, or whether they indulged in hyperbole or not, is an attempt take the focus away from the basic fact that a 19-year-old was assaulted and killed.

That the girl belonged to a dalit family is not an extraneous factor, given the caste animosities in an Indian village, where all castes, including the dalits, are engaged in a power tussle. And in most of these cases of power tussle, dalits are at a disadvantage though there is more talk about the exploitation of dalits from all around and there is little action to do away with the exploitation.

The Adityanath government can hope to win over the dalits by protecting them rather than filing cases against those who spoke out in support of the murdered dalit girl and her family.