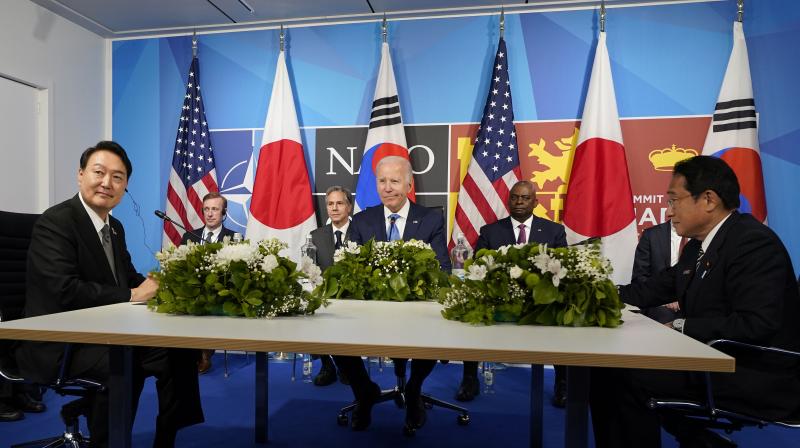 The “special military operation” that Russia launched in Ukraine on February 24 this year has refocused a floundering Nato on its core objective of guaranteeing the security and territorial integrity of its members, which has now being extended to all European countries bordering Russia.

Nato’s June 28-30 Madrid summit not only reiterated its commitment to aid and arm Ukraine but also for the first time, recognised “systemic competition” from the People’s Republic of China which “challenges Nato’s interests, security and values, and seeks to undermine the rules- based international order”. The June 29 Madrid summit declaration said Nato members were united in their “commitment to democracy, individual liberty, human rights and the rule of law” and for “upholding the rules-based international order”.

In the Indo-Pacific, Australia, New Zealand, Japan and South Korea are “partners” of Nato and, for the first time, their leaders also participated in the Nato summit. These four countries, however, did not sign Nato’s Madrid declaration.

China’s “wolf warrior” diplomacy in its neighborhood has created unease all around and America’s allies in the region are seeking to strengthen security ties not only with the US but also with Europe. Japan observers have noted a bitter realisation in Japanese ruling circles that it would be impossible for Japan to stand up to China by itself, either economically or militarily. Japan greatly relies on US security assurances but wants European countries to take an interest in Japan’s security and integrity as well. On the eve of going to Madrid, Prime Minister Fumio Kishida had said that at the Nato summit he would “promote the idea that the security of Europe and the Indo-Pacific region are inseparable”.

The countries of the region are also wary of China’s aggressive designs on Taiwan. Australia’s new Prime Minister Anthony Albanese noted that the “Ukraine invasion has brought democratic nations together whether they may be members of Nato, or non-members such as Australia”.

South Korea’s new President, Yoon Suk-Yeol, went on his first overseas visit to Madrid for the Nato summit. Responding to a question on his return from Madrid, he avoided naming China but said “South Korea’s diplomacy has been focusing on how to deal with a certain country. But as I said in my Nato speech, it is important for South Korea to pursue common values and rules, and unite with others when these values and rules are violated.”

China is against Seoul and Tokyo joining Nato’s plans to strengthen its foothold in the Indo-Pacific region. After the Madrid summit, China’s foreign ministry spokesman said “Beijing will not ignore attempts to undermine China’s interests”.

The North Korean reaction was characteristically blunt, accusing Nato of “turning its sinister eyes towards Asia”, adding that “Nato is nothing but a perpetrator of the US hegemonic strategy”.

In Madrid, there was a US-Japan-South Korea Trilateral Summit, which was held after almost five years. This was a reflection of both President Yoon and Prime Minister Kishida desiring to improve the frosty relations between the two countries. Some observers believe that Japan and South Korea may come closer due to China’s increasing belligerence. President Yoon has publicly said he wants to improve ties with Japan, suggesting that all “past and present issues be addressed at the same time”. This will include issues like “comfort women”, wartime slave labour, the issue of the sovereignty of Dokdo/Takeshima island, and will be a tall order.

A Nato summit with the “Asia-Pacific-4” was also held. This can become a regular feature in future Nato summits, bringing the four “partner” countries closer to Nato deliberations and decisions.

China’s creeping expansionism, its “wolf warrior” diplomacy, the flagrant violation of the UN Convention on the Law of the Sea in the South China Sea and aggression in Ladakh have triggered a rethink among the policymakers of major countries of both the Indo-Pacific and Europe. The Pew polls of most countries reveal an increasingly unfavourable view of China amongst countries near and far. A recent poll showed that 87 per cent of Japanese, 86 per cent Australians, 83 per cent Swedes, 82 per cent Canadians and 80 per cent South Koreans have a negative perception of China.

After the Ukraine invasion, Nato’s fortunes have changed dramatically. In an interview to the Economist in November 2019, France’s President Emmanuel Macron had warned Europe “Nato had become brain-dead”. This remark was provoked by Nato’s insufficient response to then US President Donald Trump’s distrust of Europe and questioning the value of US security guarantees to Europe enshrined in the Nato Charter. Mr Trump’s main grouse with Nato had been that the European countries were spending only on an average 1.77 per cent of their GDP on defence, while the United States was spending 3.7 per cent of its GDP.

This won’t be the first time Nato has turned its gaze towards Asia. Nato had led the “Resolute Support Mission” in Afghanistan (2015-21).

After the Quad security dialogue among the United States, India, Japan and Australia gained traction since 2019, both China and Russia had erroneously termed the group as an “Asian NATO”. What lies on the horizon may be the expansion of Nato’s ambit to the Indo-Pacific. The expansionist actions of China is solely responsible for this strategic shift.