Why a J&K ‘solution’ by Pak mantri won’t work

Mazari chose to blame previous governments in Pakistan on a variety of issues, starting with a lack of their commitment towards J&K. 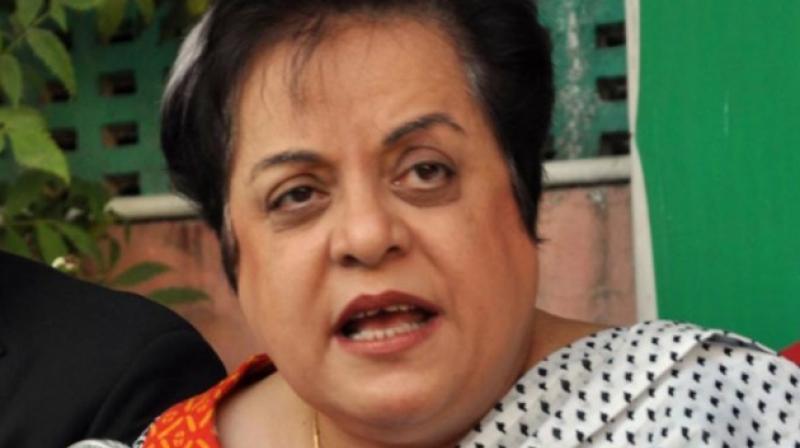 Since August, we have been hearing about Shireen Mazari working on a strategic conflict resolution model for Jammu and Kashmir. Pakistan’s human rights minister and well-known India-baiter has come up with a nine-page paper in the Journal of the Strategic Studies Institute, Islamabad, and spoke about it at an extensively-reported seminar at Republic University College, Islamabad. Projecting it as the mother of all solutions, with references to historical cases of dual ownership of disputed lands like Andorra and settlements like the Good Friday Agreement in Northern Ireland, Ms Mazari goes wrong in trying to find solutions by branding India as the villain. She should have taken a statesmanlike approach, and examined the merits and demerits of the alleged dispute, which India doesn’t see as a dispute at all as it goes by the finality of the Instrument of Accession; which was reinforced by its joint parliamentary resolution of 1994. It’s important to study Ms Mazari’s paper in the light of the glaring inaccuracies she chooses to highlight. Coming so early in the Imran Khan government’s tenure, and given the obvious influence she has in Pakistan’s strategic circles, this could well form the basis of Pakistan’s information campaign to sensitise the global community against India and its stance on J&K, which has never wavered.

Ms Mazari chose to blame previous governments in Pakistan on a variety of issues, starting with a lack of their commitment towards J&K. She cites the lack of linkage of the 1949 Geneva Conventions and customary humanitarian laws to the supposed struggle of J&K’s people against alleged Indian excesses. She also quotes the 2002 Almaty Declaration on an international commitment to self-determination. Ms Mazari is livid that past Pakistani governments didn’t passionately pursue refreshment of the international community’s memory on alleged violations by India’s security forces in J&K. Among other points, her sharpest focus is actually on the questionable report of the UN Human Rights Commission led and drafted by UN high commissioner for human rights Zeid Ra’ad Al Hussein, whose credibility as an independent, impartial observer was always in doubt. India had rejected this report right after its release.

Those familiar with Pakistani intellectuals and their attitude at international forums will recall that over the past few years their arguments appeared tutored by officialdom to focusing on returning to the 1949 UN Resolution, the recognition of the United Nations Military Observer Group for India and Pakistan (UNMOGIP) to perform its duties and the plebiscite issue. This is spoken of ad nauseam at every such gathering without taking the ground realities into consideration. Ms Mazari uses this to project that Pakistan must not hesitate to return to the UN as a third party to resolve the so-called dispute.

It’s important to first remind Ms Mazari that earlier Pakistani governments have actually done yeomen service to her nation by keeping the J&K issue alive through all possible routes — the physical proxy war in J&K, diplomatic interventions at the UN and a large-scale international information campaign to smear India. It’s a different matter that this hasn’t cut ice due to Pakistan’s complete lack of credibility. Two issues go against the Pakistani minister’s arguments. First, Pakistan’s democratic credentials are pretty low, due to the complete domination of foreign and internal security policy by not just the Army, but a plethora of outfits known collectively as the Deep State.

Second, Pakistan has been unable to convince the international community on why it follows a two-track policy in its dealings to weed out terrorism from its territory. It held the successful Operations Raddul Fasad and Zarb-e-Azb targeting terrorists and networks that worked against Pakistan, but it continues to nurture and support the Jamat-ud-Dawa and Haqqani Networks against India and Afghanistan. Friendly and unfriendly terrorists within a state, with the latter being nurtured against neighbours, doesn’t exactly go well with the world community, which anyway sees Pakistan as one of the most dangerous places on earth, and the core centre for the growth of radical practices like blasphemy.

There are more core arguments against Ms Mazari’s so-called innovative suggestions. The 1949 UN Resolution no doubt stands on record as much as the plebiscite call, but she comes up with nothing to counter India’s basic argument that events since 1949 have overtaken the resolution. Pakistan does not recognise that the Instrument of Accession of October 26, 1947 signed under the Indian Independence Act 1947 was also approved by Lord Mountbatten when he wrote: “It is my government’s wish that as soon as law and order have been restored in J&K and her soil cleared of the invader, the question of the state’s accession should be settled by a reference to the people.” That reference to the people was not possible since the invaders never vacated the territory they were supposed to. Thereafter, four attempts (including an ongoing one) have been made at Pakistan’s instance to change the status quo by force, effectively neutralising the resolution.

Ms Mazari also forgets that Pakistan remains a signatory to the 1972 Shimla Agreement, by which its dignity and self-esteem were restored with the return of 93,000 prisoners and large tracts of territory, and a clause that bilateralism would be followed in all parleys. India implicitly believes in the Shimla Agreement for the furtherance of relations, and UNMOGIP forms no part of it. Noticeably, despite Pakistan’s frequent interjections about the UN resolution and resort to UNMOGIP as an arbitrator on the ground, there has been little traction with the international community.

Pakistan is in the throes of a major financial crisis. It could do well to improve relations with India through talks as it has itself proposed. However, to try and hold India to ransom with ongoing sponsored violence in J&K and other parts of India will not get it the legitimacy it seeks. To be truly different, both Imran Khan and Ms Mazari must try to break the stranglehold of the Deep State on Pakistan’s numerous affairs. It won’t happen easily, and neither will the intent of embarrassing India into negotiations against the basic premises of history. Pakistan must recognise its place in the international community and that of India too. There will be solutions to J&K aplenty once it learns that coercion and intimidation cannot go hand in hand with negotiation.