The Centre cannot even complain of the ignorance, intrigues or machinations of state politics as it is part of the ruling dispensation! 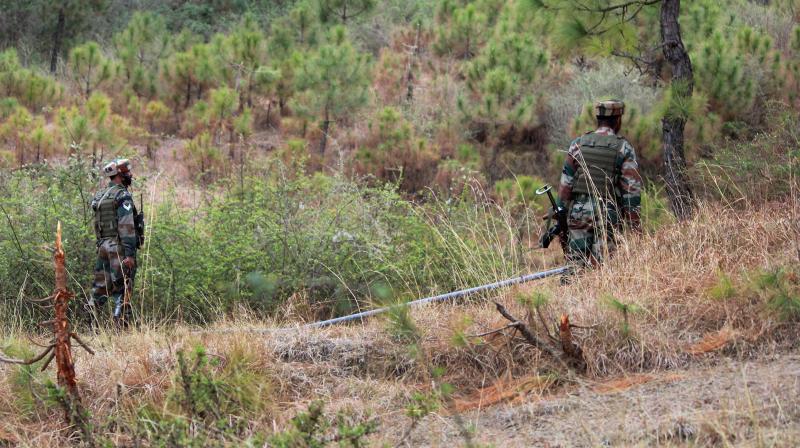 Indian army soldiers patrol near the Line of Control in Poonch (Photo: PTI)

The constitutional “separation of powers” into the executive, legislative and judiciary defines the governance structure and the enabling framework with each irreplaceable arm, without which the sustainable prosperity and progress of a state is impossible. Adequacy of inputs, creativity and public visibility of each of these governmental axis decides the fate of the state — though the judiciary acts as the ultimate adjudicator and upholder of the fundamental rights, the essential responsibility of the defining narrative is with the netas and the accompanying babus, who along with other citizens are protected from external threats at the borders by the faujis.

Since Independence, internal strife and insurgencies have had either a compelling socio-economic genesis (Naxalism, Punjab, Assam, etc) or issues dating back to sovereign integration (Manipur, Nagaland, etc), with latent perceptions that ultimately brewed towards the “us-versus-them” line — ably stoked by external elements inimical to the interests of India. No insurgency in India has been religion-based (both Punjab and Kashmir were not religio-centric to start with, though principal protagonists did try to retrofit the same) or created by the Indian armed forces. The Indian examples of successful counter-insurgencies in both Mizoram and Punjab have occurred with the providential alignment and deployment of the political will with a spirit of accommodation, bureaucratic delivery and the security imperatives rolling out in tandem with seamless inter-linkages, deliveries and clear-cut accountabilities.

Whereas Kashmir is a glaring example of the sub-optimal display of political and administrative ingenuity that has seen a faltering and stuttering infusion of creativity and candour (read Atal Behari Vajpayee’s evocative and rare Insaniyat ke dayeere se), and is unfortunately getting solely contexualised to the imageries, perceptions and abilities of the faujis to do something that they are essentially not mandated for (policing the Valley is the job of the uniformed babus, the state police, or at best the paramilitary, but certainly not the Indian Army on an ongoing basis).

Kashmir is not a military problem, it saw a fauji intervention at its post-birth immediacy to quell the Afridi raiders, restore Indian sovereignty and recoup the lost lands, albeit, halted mid-course owing to political decisions — the first of the many political and administrative wounds that have been allowed to fester till the open-pus of violence burst forth in 1990. It is not just the netas who have failed the Valley and the country, for a state that has invariably got more financial allocations than its size and scale — the reality of prevailing infrastructure and ground situation simply does not justify the budgetary allocations or distinguish the track record of the bureaucrats. All political parties (both state and national) without exception have at some stage contributed to the mismanagement or prevarication that has led to a current political paralysis and stalemate. Where is the J&K equivalence of the creative Mizoram accord of 1986 that unprecedentedly paved way for the then insurgent leader Laldenga to assume the chief ministership? Where are the similar green shoots of a reconciliatory spirit exhibited in the Rajiv-Longowal Accord of 1985? Actually, the netas and babus have slipped away easily and the faujis have been “fronted” at the restive populace, whose collective face of their angst and ire has now morphed into that of the Indian soldier!

Behind this incomplete and convenient veneer of an overtly fauji (militarised) solution, disturbing recurrences like Uri’s, Pathankot’s, Pampore’s to even the recent killing and beheading of an Army soldier and a BSF head constable by Pakistani troops in the Krishna Ghati sector along the Line of Control have become rote statistics, merits and demerits of the AFSPA are getting passionately discussed, “human shield” has entered the lexicon and basically the nation is dangerously split in a jingoistic “either-or” mode that is afforded by the safe comforts of a non-Valley presence. Condescending and tactical invocation to the fauji aside, the hard truth that the ultimate solution to the Valley can only be afforded by the trinity of the neta, babu and the fauji is completely lost on most. Those familiar with the Valley would know at certain places without the fauji in tow, the neta or babu dare not venture out on their own — this is the extent of politico-administrative absence and public disillusionment.

Beyond a point, the fauji has to revert back to the LoC or the “barracks” — he cannot and should not be expected to usher in the politico-administrative rapprochement that the Valley so urgently needs. There is little or no pressure in the “corridors of power”, media or public imagination to do some serious finger-pointing on this glaring absence of netas and babus. Wrapping oneself in the morality and algorithm of nationalism is electorally gratifying, it also sustains the vendetta optics of “sorting out the problem” — essentially, the fauji is made the last man standing to undo the mess and “flight” of the critical other sub-components of the governance framework. A parallel and collateral damage in the melee of this unidimensional picture of J&K is the relative ignominy and the forgotten state of neglect for the Jammu and Ladakh regions.

Contrary to the misplaced zeal of the Hurriyat leaders or their benefactors across the LoC, the solution does not lie in Islamabad or Rawalpindi, it lies squarely in Srinagar and Delhi to restart the process of thawing and emotional integration. It will not be a linear journey or painless — but then, neither was Mizoram or Punjab, even after signing the respective accords. The composite “processes” of healing and politico-administrative reimagination and redeployment, along with the fauji steel will eventually conjure positive dynamics. The Centre cannot even complain of the ignorance, intrigues or machinations of state politics as it is part of the ruling dispensation! It is time focus was shifted away from the fauji in the Valley as he or she is already overburdened doing the chores of other failed arms of the government, and a reverse pressure and expectation is exerted on netas and babus to conceptualise and deliver governance. Nothing short of a joint effort by the neta, babu and fauji will suffice, irrespective of what the Hurriyat leaders or Nawaz Sharif says!