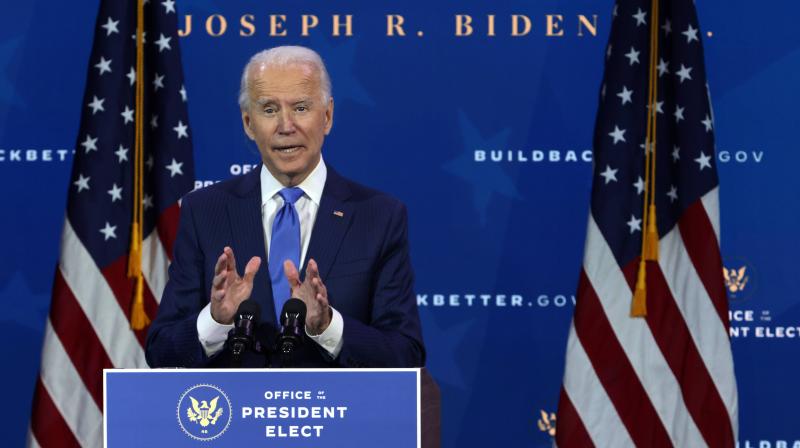 U.S. President-elect Joe Biden speaks during an event to name his economic team at the Queen Theater on December 1 in Wilmington, Delaware. (Alex Wong/Getty Images/AFP)

The Donald Trump era may be drawing to a close in the United States, but America will never be the same again. At least not the America that once shone proud, flashing its democratic credentials, hoist on its self-made pedestal.

Mr Trump and the recent US presidential elections have irrevocably tarnished the American democratic model and eroded its moral authority. Today, America increasingly looks like a tired, somewhat tattered democracy, struggling with its inherent inefficiencies and flaws, clawed by manipulators and creased by unwieldy procedures.

The bitter and highly polarised November 2020 election was watched with disbelief and distaste across the world. Even nations at the bottom of the democratic ladder couldn’t restrain their delight and disdain at America’s tortured electoral process.

“What a spectacle!” exclaimed Iran’s supreme leader Ayatollah Ali Khamenei of the US elections. Khamenei, a champion of one of the world’s most repressive regimes, tweeted: “One says this is the most fraudulent election in US history. Who says that? The President who is in office. His rival says Trump intends to rig the election! This is how #USElections & US democracy are.”

The incoming US President, Joseph R. Biden, who will be sworn in on January 20, 2021, knows that he has his job cut out for him. Before the elections he pledged to unite America and end the “grim era of demonisation”.

“It is time to heal America”, he declared, adding he fought this election “to restore the soul of America, to rebuild the backbone of this nation, the middle class and to make America respected around the world again, and to unite us here at home”.

But all that is easier said than done. America remains totally polarised, like never before, and having once slipped from the top of the global hierarchy, it might be difficult if not impossible to crawl back. Mr Biden’s democratic credentials, statements and worldview hark back to an era forever lost. The old days of American hegemony are not lamented by the world. Internally too, Mr Biden will find it hard to restore those values so missed by liberal, egalitarian Americans.

The world will take a lot of convincing to believe that the core values of democracy, liberty and equality that America once preached is indeed being practised there again. Faith once lost is always difficult to restore. Like Sisyphus’s rock, it keeps rolling down.

The implications for the global order are profound. With moral authority came power and the United States unabashedly wielded it. Toppling regimes became acceptable worldwide if it was seen as a benevolent act by the United States for the greater glory of democracy and liberty.

Iraq’s Saddam Hussain could be hunted down and hanged as he was a despot responsible for killing opponents and throttling democracy. This disguised the real reason for the killing, which was the dismantling of the Ba’athist regime in Iraq and forever destroying that country’s strategic capabilities in the Middle East. By hanging Saddam and bombing Iraq to the ground, Washington ensured Iraq would never again pose a threat to its allies and interests in the region.

Not surprisingly, the US could similarly get away with helping repressive regimes, like the Shah’s Iran, Gen. Pervez Musharraf’s Pakistan and the dozens of dictatorships it supports the world over.

In other words, the torch of liberty and democratic values has been used as a weapon of coercion, cajolement and manipulation by Washington in the post-World War II era. The most powerful use of these values was the vilification and undermining of enemy regimes that don’t necessarily adhere to them.

Thus, the democratic ideal and values of personal freedoms played a large part in undermining and ultimately bringing down the Soviet empire. This was a huge strategic victory, which demonstrated the advantage of holding the moral high ground and espousing a value system eagerly sought after by people from other cultures and nations.

The US has for long used its democratic credentials to further its geopolitical aims and civilisational narrative which equated good with the American way of life. This narrative has broken down. The breakdown of this dynamic is bound to have severe repercussions around the world.

While the end of using democratic credentials as a tool for hegemonic objectives will not be lamented, what will be is the erosion of those core values. All said and done, those values did serve to rescue many societies from various forms of utter despotism.

Who will shine the moral beacon in the years to come? With America’s democratic ideal broken and suspect, Europe cringing and unable to come to terms with growing ethnic and religious diversity, it will be the despotic ascendant powers like the People’s Republic of China that will seek to assume the status of global role model. This cannot but be a terrible portent. Something better must emerge. But from where, in this wilderness of ideologies and systems currently prevailing all over the world?

One unusual suggestion has recently been made by Singapore’s best-known diplomat-academic Kishore Mahbubani. In a recent piece in the South China Morning Post, he wrote: “India is entering a geopolitical sweet spot. What does this mean? In a world crying out for a strong, independent voice to provide moral guidance to a troubled planet, the only realistic candidate is India. None of the three other obvious candidates -- the United States, the European Union and China -- can step up to the plate now.”

“India’s rise is ‘reassuring’ because it is not perceived as a threat by other powers. Given this trusted position, India can take advantage of it by providing the world ethical leadership, of the kind that Gandhiji would have provided if he were alive today”, Mahbubani wrote, adding that India could become the global champion of multilateralism and a rules-based behaviour.

Within India, however, there is widespread disillusionment and a sense of dejection arising out of the uncontrolled spread of the Covid-19 pandemic and sustained economic contraction. Massive job losses, economic dislocation and disappearing public savings have left a nation bewildered and despondent.

Internally too, India is acutely polarised and fragmented; and few in the world are looking up to it as a potential role model. Yet, as Mahbubani argues, India has the potential to emerge as the world’s ethical flag bearer. But for that to happen, the country will require a benevolent, consensual, farsighted statesman as a leader, who is capable of unifying a vast and diversified nation -- and perhaps the world as well.