Modi is not the first person to express his irritation with the political numbers in the Rajya Sabha. 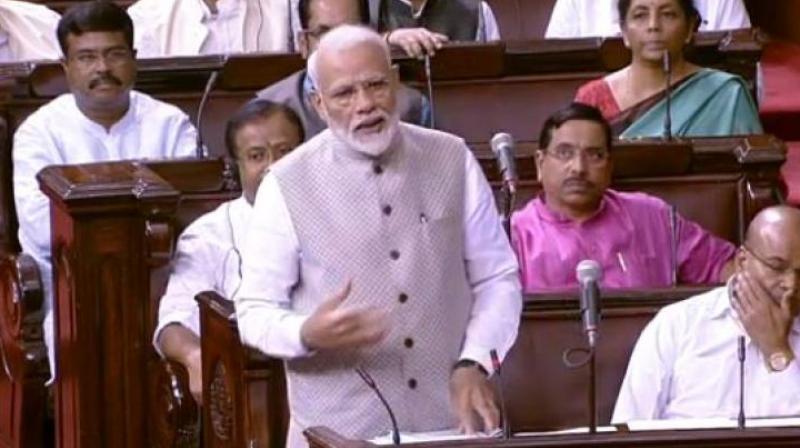 Prime Minister Narendra Modi is not the man for niceties of any kind — political or otherwise. He has deliberately cultivated the image of a politician who spurns political correctness. The Prime Minister’s blunt talk is refreshing at times, but it loses it charm very soon because bluntness soon turns into rudeness, and it takes on the tone of intolerance. The motto of Mr Modi and his home minister Amit Shah, who is also the president of the ruling Bharatiya Janata Party, is to place the party in a commanding position in all fora, including Parliament and the state Assemblies. The hunger for success is a good thing and the desire to dominate is an acceptable propensity for a political party. But there are red lines, and Mr Modi appears to be only too willing to cross them.

This became clear in his reply to the motion of thanks to the President’s address in the Rajya Sabha on Wednesday before he left for the G-20 summit in Osaka, Japan. The Prime Minister’s penchant for dramatics is so compulsive that he could not restrain himself from saying that he had to request and plead to be allowed to speak in the House because of his foreign tour, and this was due to the fact that his party did not have a majority in the Rajya Sabha. And the phrase: “We know we do not have a majority in the House (Rajya Sabha),” was repeated three times. Later, the deputy leader of the Congress in the Rajya Sabha, Anand Sharma, clarified in a press briefing that the suggestion for scheduling the Prime Minister’s debate had come from the Chairman, vice-president M. Venkaiah Naidu, and the Opposition parties had readily agreed to the suggestion. But it was Mr Modi’s temptation to make things dramatic that forced him to give it a rhetorical twist.

It is the natural arrogance of any political party — the Congress displayed it in its heyday in power — to flex its muscles to get its way through and to display ill-tempered intolerance to any kind of opposition. Mr Modi’s impatience with the Opposition’s majority in the Rajya Sabha may be understandable, but not justified. The BJP is slowly moving towards gaining a majority in the Upper House. Four of the six Telugu Desam Party (TDP) members in the Rajya Sabha have defected to the BJP while continuing to conform to the Anti-Defection Act and there could be others. The BJP can muster a majority in the Rajya Sabha by negotiating with parties which are outside the BJP-led NDA and the Congress-led UPA. The man who used it strategically to strengthen his party’s position in the Lok Sabha was former Prime Minister and Machiavellian par excellence P.V. Narasimha Rao, who engineered defections without breaking the anti-defection law during 1991-96.

There is a fundamental issue at stake in Mr Modi’s argument about the Rajya Sabha. He is saying indirectly that the Rajya Sabha, whatever the strength of the political parties, should fall in line with the spirit of the mandate as reflected in the Lok Sabha. The second House, whatever its constitutional position and in the case of Rajya Sabha there is a complicated history, should not be conforming to the sense of the Lower House. It then becomes redundant. The second house or the Upper House should display its own sense of judgment, which can sometimes coincide with that of the Lower House, and differ at other times. Of course, the judgment or sense of the House in each case is based on the arithmetic of the numbers that each party has in each House. The Opposition parties could be obstructing legitimate bills in the Rajya Sabha after they were passed in the Lok Sabha, something that the BJP did when it was in Opposition. Those obstructionist tactics are indeed frustrating, but they cannot be used to argue the case the Upper House must fall in line with the Lower House.

Mr Modi is not the first person to express his irritation with the political numbers in the Rajya Sabha. During the first Modi government, then finance minister Arun Jaitley had argued against the legitimacy of the “unelected” — he perhaps meant indirectly elected — Rajya Sabha thwarting the laws passed by the directly-elected Lok Sabha. Mr Modi now and Mr Jaitley then were clearly raising questions about the independent status of the Upper House. And given the populist proclivities of Mr Modi’s BJP, there could be an argument for a unicameral legislature. The BJP has always pretended to be a votary of federalism and in favour of the rights of the states. But now that it is in a commanding position at the Centre and in many states, it has the imperialistic propensity to demand that the party with a large majority in the Lok Sabha should rule the country without hindrance. But constitutional checks in the form of the Rajya Sabha and the Supreme Court and state Assemblies are placed precisely for this reason — to check the power tantrums of the majority party in the legislatures at the Centre and in the states.