For a less-cash India, a few things on to-do list

Most people in the developed world, where less-cash is the norm, are literate. 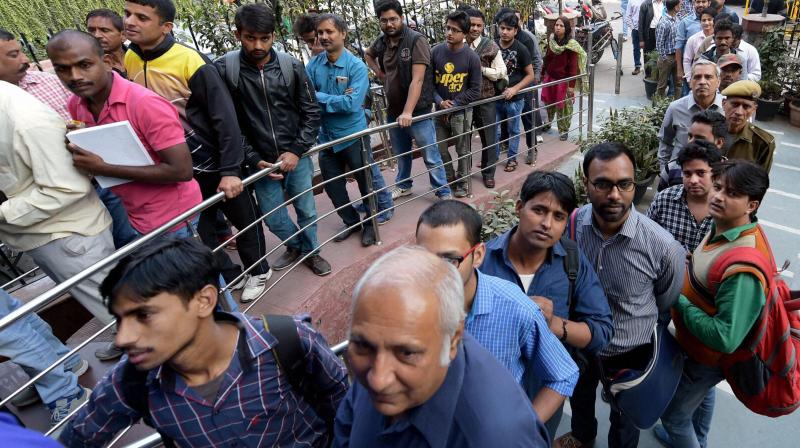 People stand in a queue outside an ATM to withdraw money in New Delhi. (Photo: PTI)

Imagine you are in Sweden,” said the man behind me in the queue. We were both waiting to withdraw some cash from the bank. And like others before, and after us, we found ourselves talking about our headline-grabbing race towards being a cashless or less-cash state. Like Sweden.

I have never been to Sweden. Nor had he. At a certain age and stage, some of us may have imagined Sweden by crooning Money, money, money/must be funny/in the rich man’s world, a song immortalised by Swedish pop group ABBA. That was then.

Today, Sweden, the first European country to print banknotes (1661), wants to be the first to do away with it totally. If Sweden and so many others can hurtle towards a cashless Nirvana, why can’t India — so goes an argument one hears more and more. Nothing stops us from fantasising that we are almost there — in the almost-Sweden state — and we are done with standing in queues for paper money.

An interesting question, however, is also why we don’t emulate Sweden with such ferocious intensity in other areas. Sweden is one of the world’s 10 richest nations, has a generous welfare state and 99 per cent literacy. Most people in the developed world, where less-cash is the norm, are literate.

What about India? The latest census reveals that literacy has jumped from 65 per cent to 74 per cent in 2011. But that still leaves us with the largest population of illiterate adults in the world — more than 287 million. This is 37 per cent of the global total.

That’s not to say India can’t take a leap forward. It can. But it can’t afford to ignore ground realities and limitations.

There were 417 billion cashless payments in 60 countries worldwide in 2014, according to one study. But these are increasing at only a slightly faster rate than the number of ATM cash withdrawals. This means cash is still favoured as a means of payment for a significant proportion of the global population.

In India, where cash has been the economy’s prime driver, there are other complications. Millions in India still don’t have electricity. Nor everyone has mobile phones or a reliable Internet connection.

The other very valid concern is around security. Digital payments can pose major security risks unless specific processes are in place. And while technology can empower the poorest in remote parts of India, illiteracy and lack of tech-savviness can also be disempowering.

The campaign to make India a cashless economy is on mission-mode. But where’s the missionary zeal to wipe out illiteracy or even improve pathetic learning outcomes, which study after study, year after year, demonstrate? How do people become digitally literate without first becoming literate? Can you run before you walk?

In a recent, impassioned newspaper article, senior Union minister M. Venkaiah Naidu, in charge of information and broadcasting and urban development, told us what we are seeing is tantamount to a “cultural revolution”, involving a “behavioural modification”.

“The demonetisation of high-value currency notes announced on November 8 by Prime Minister Narendra Modi has several dimensions. Cutting off money channels to terrorists and extremist elements, weeding out counterfeit currency and driving out black money are the visible, short-term objectives. But the long-term consequences and gains include ushering in a behavioural change at all levels of society. It is a part of the grand ‘cultural revolution’ the PM is working on. The entrenched old order needs to make way for a new normal,” wrote Mr Naidu.

To many of us who have a nodding acquaintance with history, the words “cultural revolution” evokes images of one of the bloodiest periods of Chinese history — the Great Proletarian Cultural Revolution (1966-1976), a period of political and social chaos caused by Chinese leader Mao Zedong’s bid to use the Chinese masses to reassert his control over the Communist Party.

But let us ignore Mr Naidu’s slightly curious turn of phrase, and zoom back to India’s attempts at getting the masses and classes to go cashless at breathtaking speed.

The issue is not why India is moving towards a less-cash state. It is about the sequence in which things are happening or not happening. What are India’s priorities as a country with aspirations and a sense of destiny? Is becoming cashless a greater priority than, say, becoming fully literate? What are we doing on cyber security? What is the level of understanding of cyber security issues among the average Indian?

My part-time domestic helper is an elderly widow who dropped out of school after Class 2. She can just about sign her name. How will someone like her fare in a cashless world? Then there are technological illiterates. Even in New Delhi, India’s capital, in recent days I have seen many elderly men and women asking others to help them withdraw money from ATMs and freely sharing their PIN numbers.

You can’t always coerce people into changing exactly when you want them to. Trust is critical to sustainable behaviour change. For an example, look no further than the eradication of polio, one of India’s great achievements in recent times.

What truly helped overcome the pools of resistance in the last lap of the battle against polio were concerted efforts at different levels at building trust. Families that had earlier resisted polio drops being given to their children as they were suspicious of the government’s motives came around. It took time. But the efforts paid off.

So with this race to become a cashless or less-cash state, it is legitimate to ask why many things that need to exist before a cashless system becomes truly empowering are not talked about as loudly as the cashless vision? And the protection every citizen will have in the envisioned digital paradise.

As with everything else, building trust will be critical. Because though Times They Are A-Changin’ as Prime Minister Narendra Modi may say, quoting Bob Dylan, it’s not changing at the same pace for everyone in this nation.