They embroiled in a racial controversy and cancelled their much-anticipated 'The Great Show' in Shanghai. 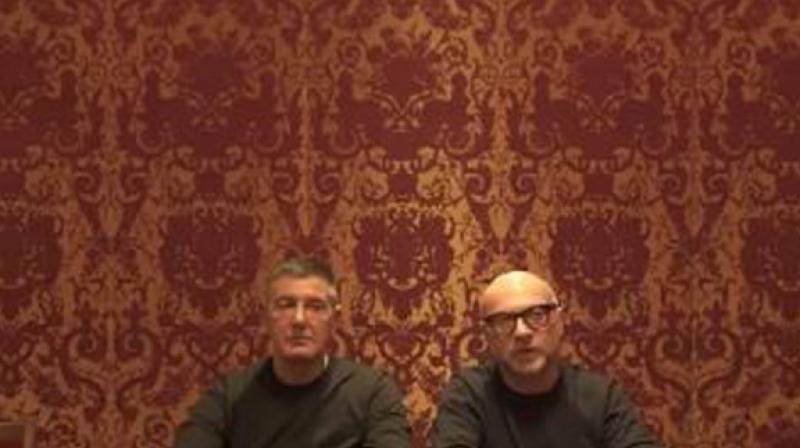 New Delhi: After getting embroiled in a racial controversy and cancelling their much-anticipated fashion show 'The Great Show' in Shanghai, Fashion Giant Dolce and Gabbana issued an apology.

Amid the global backlash, the duo took to Twitter to release a video to issue a statement saying, "Over the past few days, we have thought long and hard with great sadness about everything that has happened and what we have caused in your country and we are very sorry."

"We have always been in love with China. We've visited it and seen many of its cities. We love your culture and we certainly have much to learn. That is why we are sorry if we made mistakes in the way we expressed ourselves," Dolce said.

Joining him, Gabbbana promised that the mistake will never be repeated. "We will never forget this experience and it will certainly never happen again. We will respect the Chinese culture in every way possible. From the bottom of our hearts, we ask for forgiveness," he asserted.

Post-cancellation of the show, the two tweeted, "What happened today was very unfortunate not only for us, but also for all the people who worked day and night to bring this event to life. From the bottom of our hearts, we would like to express our gratitude to our friends and guests."

The fashion brand faced controversy over a series of videos released on social media. In the brand's social media accounts, a 40-second video showed a Chinese model struggling to eat pizza with the help of chopsticks.

In two other videos, the same model was shown to attempt eating a cannoli and a bowl of spaghetti, while saying the phrase 'Dolce and Gabbana', which was allegedly made to mock the way the Chinese people pronounce English words.

Following the controversy, the Dolce and Gabbana team revealed that the Instagram handle was hacked.

"Our Instagram account has been hacked. So has the account of Stefano Gabbana. Our legal office is urgently investigating. We are very sorry for any distress caused by these unauthorized posts, comments, and direct messages. We have nothing but respect for China and the people of China," the team wrote while apologising to the Chinese audience.

Before the postponement of the show was announced, several Chinese celebrities, including models, voted in favour of not attending the show, reported CNN.

This is isn't the first time they got embroiled in such a controversy. In 2013, people protested in Hong Kong as they were stopped from taking photographs of the Dolce and Gabbana store.