Of becoming an author at 14! 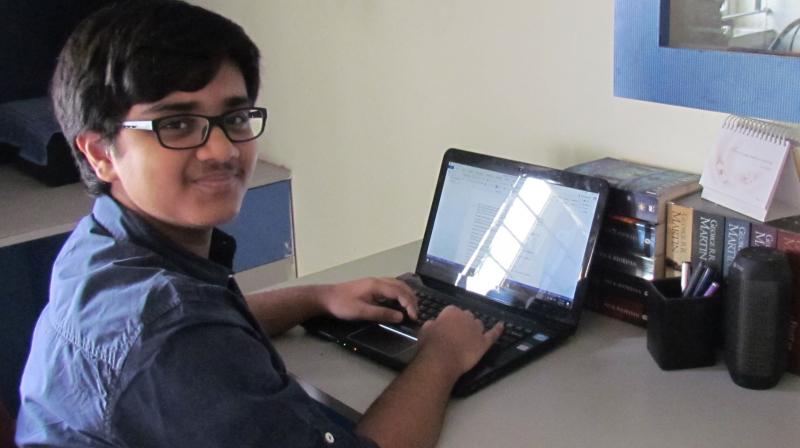 Subhashish Dey has become an author at 14 after publishing his first book Fate’s Design. Set in Moscow the book simultaneously traces the journey of a girl, who is kidnapped at two, and her mum, who distraught with her life as the trophy wife of a Russian millionaire, leaves everything behind to begin afresh and how their lives intertwine after many years.

Speaking to this correspondent, Dey talks about the idea behind the story, his inspirations and also gives a few much needed tips to budding authors, should they want to succeed!

It’s an exhilarating feeling. In school, people are constantly talking about me and my book, and sometimes it seems unreal.

What gave you the idea for the story?

I once had a casual conversation with a friend, who mentioned about a girl who used to get bullied at school every day. I couldn’t get it out of my mind and went to sleep over it. When I woke up, I had an idea for the story of a young girl, who faces many hardships and whose mother just happened to be a pop star.

If you were to rewrite it, what would you have changed?

If I were to rewrite it, I would spend more time developing the main characters, and add more to their respective sub-plots, giving them more depth and dimension. There are many story arcs which could have been further elucidated, which I failed to realise when I first started writing the book. However, two years later, my perspective has broadened from what it used to be, and developing my characters is something I would take very seriously now.

Which is your favourite character from the novel, why?

My favourite character is Irina Federoffa, a socialite’s wife who is unsatisfied with her present state of being and wishes to be more empowered. The kidnapping of her daughter leaves Irina heartbroken, but she realises that this may be a  chance for her to start anew, and from then on her life takes a turn, which eventually unfolds as the story progresses.

Who are your literary inspirations?

My literary inspirations for this book were quite a few authors. George RR Martin’s writing sparked the idea of a grey character, a character with a renewed conscience, while Gillian Flynn inspired the not-so-subtle accents of crime in a family-drama. Lucinda Riley’s The Seven Sisters inspired the tone of the novel and Jhumpa Lahiri’s writing gave me the theme of a search for identity.

Which book are you reading now?

I am currently reading the first book of The Lord of the Rings Trilogy – The Fellowship of the Ring.

How difficult or easy is it to write a book?

Writing a book is definitely something that leans towards the difficult side. Over the course of fifteen months and five to six drafts that it took for me to be satisfied with the book, I had many periods of feeling uninspired when I just couldn’t write. It got emotionally draining at times. My father helped me through all of those times and made me realise that it had always been my choice. He would encourage me to work on the manuscript with renewed vigour, and that periodic push from his side helped with the eventual completion.

What are the five tips you would give to someone who wants to write their own book?

Are you writing anything new? Do you plan to take up writing full-time when you grow up?

Yes, I have started working on a sequel to Fate’s Design and also hope to start writing a high-fantasy book soon. Writing is definitely something I would like to do for the rest of my life. I have always wanted to be a doctor, and maybe there’s something in the idea of reaching out to people and forming connections which appeals to me, so maybe these two roles could coexist in my life.

I am quite upbeat about the first major academic event of my life. My Class X Board Examinations are just round the corner. Apart from that, I have also started working on the sequel to my first book. On the personal front, I am also looking forward to some good family vacation as promised by my parents after I am through with my board examinations.