BMC to put up posters while docs will tell patients about symptoms. 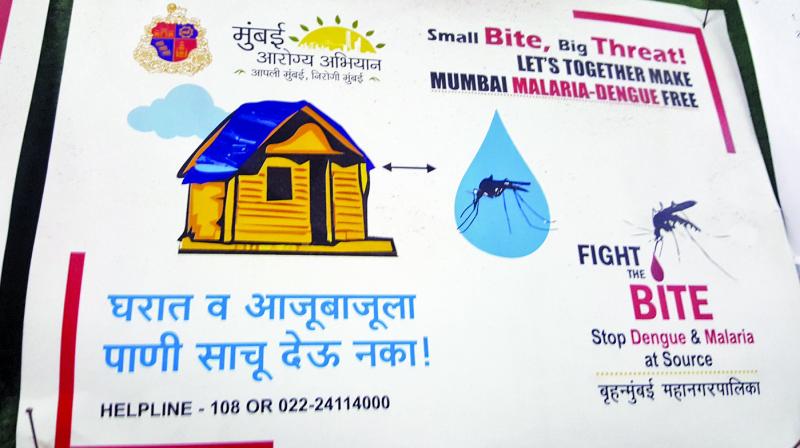 The Zika infection is known to show up in mild forms, with symptoms like flu, but in pregnant women this virus can lead to birth defects.

The government’s advisory, aside from talking about the Zika virus and its symptoms, says pregnant women must be scanned to ensure they don’t have the virus. It also says enough stock is available to treat the symptoms.

The civic body has already started putting up posters in the BMC health department.

As the mosquito that transmits Zika virus, aedes aegypti, is widely prevalent in the city, the BMC’s pesticide department has intensified its vector control programme. Apart from Zika, the aedes aegypti mosquito is also a carrier of dengue and chikungunya. Zika virus was detected in May 2016 in Brazil.

The Zika infection is known to show up in mild forms, with symptoms like flu, but in pregnant women this virus can lead to birth defects. Doctors from BMC and state-run hospitals have been asked to find out if patients visiting the hospitals have travelled to Gujarat recently.

The BMC’s executive health officer Dr Padmaja Keskar said, “Mumbai does not have any threat but lot of patients travelled from Gujarat to Mumbai and various places, so we have alerted our health post and civic-run hospitals to take steps in preventing the virus spreading further.”

“Pregnant women are at high risk of this virus. The Zika virus is known to cause microcephaly, a congenital condition associated with incomplete brain development in newborns,” Dr Keskar further said.

Aside from putting up posters at civic-run hospitals to create awareness about the virus, BMC officials are also keeping a regular check on construction sites where water is sprayed on the building, there increasing the chances of mosquito proliferation.

What is Zika?
Zika virus spreads by the bite of an infected aedes aegypti mosquito. A mosquito bites an infected person and then passes viruses to other people it bites. These mosquitoes bite both at day and night.

Its symptoms
The infection often causes mild symptoms, similar to a very mild form of dengue fever. Other symptoms are cold cough, rashes on the body and body ache. While there is no specific treatment, paracetamol (acetaminophen) may help with the symptoms.

Precautions
There is no specific treatment or vaccine to prevent the virus, so prevention is key. Remove sources of stagnant water, which can become a breeding ground for mosquitoes. Wear long-sleeved shirts and long pants and tuck your pants into your socks when outdoors. Pregnant women, especially, should avoid travelling and in case of any symptoms of fever, should seek medical assistance immediately.

Zika cases in India
Case 1: A 64-year-old male's sample showed febrile illness of 8 days' duration (negative for dengue infection) was found to be positive for Zika virus. This was the first Zika positive case reported.

Case 2: A 34-year-old female, after delivery a clinically healthy baby at BJ Medical College (BJMC) in Ahmedabad on November 9, 2016, developed a low-grade fever. A sample from the patient was referred to the Viral Research &
Diagnostic Laboratory at the college for dengue testing and thereafter
found to be positive for Zika virus. The sample was re-confirmed as Zika virus positive by RT-PCR and sequencing at NIV, Pune.

Case 3: During the Antenatal clinic (ANC) surveillance between 6 and 12 January 2017, a total of 111 blood samples were collected at BJMC. A sample from a 22-year-old pregnant female in her 37th week of pregnancy had been tested positive for Zika virus disease.