Pawar expresses gratitude to leaders for their support

NCP workers had gathered with flags and banners outside Pawar’s residence. 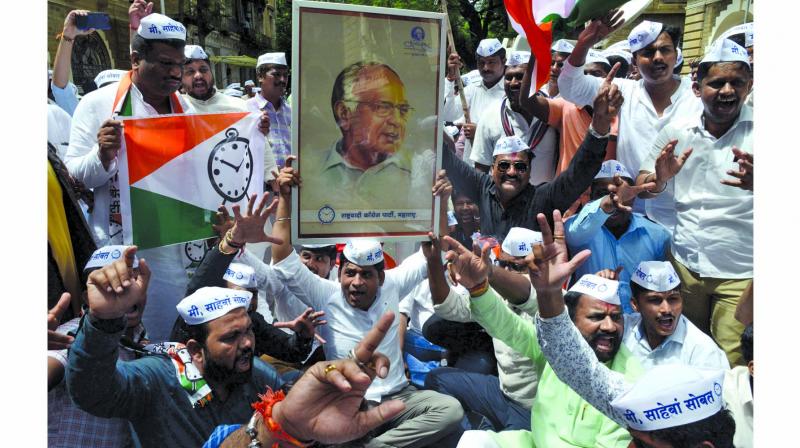 Mumbai: NCP chief Sharad Pawar on Friday thanked Cong-ress leaders Manmohan Singh, Rahul Gandhi and NCP cadres for their support in the aftermath of the Enforcement Directo-rate’s FIR against him. The NCP chief also thanked the Shiv Sena for voicing its support.

“Rahul Gandhi, Manmohan Singh and other senior national leaders and the Shiv Sena, too, supported me. I thank them,” he said.

Earlier in the day, Congress leader Rahul Gandhi openly came in support of the 79-year-old leader. “Sharad Pawar Ji is the latest Opposition leader to be targeted by a vindictive government. The timing of this action, a month before elections in Maharashtra, reeks of political opportunism,” Mr Gandhi tweeted.

Two days ago, Mr Pawar made a dramatic announc-ement that he would visit the ED office on Friday, despite not being summoned in connecting with the MSCB scam.

Speaking with reporters at his residence on Friday morning, Mr Pawar said, “I have cancelled the visit to the ED office for now. I am ready to go there when required... If someone tries to scare us off through the ED or any other agency, he or she will not succeed.”

The NCP chief pleaded his innocence, adding that he has never been associated with the bank, either as a member or director.

“Mumbai’s commissioner of police and joint police commissioner met me. There is anger among (NCP) workers after the case was filed. They were being stopped from coming to the city. The commissioner said there was a possibility of the law and order getting disturbed,” he added.