Thackeray also appealed to Maratha youths not to take the law into their hands. 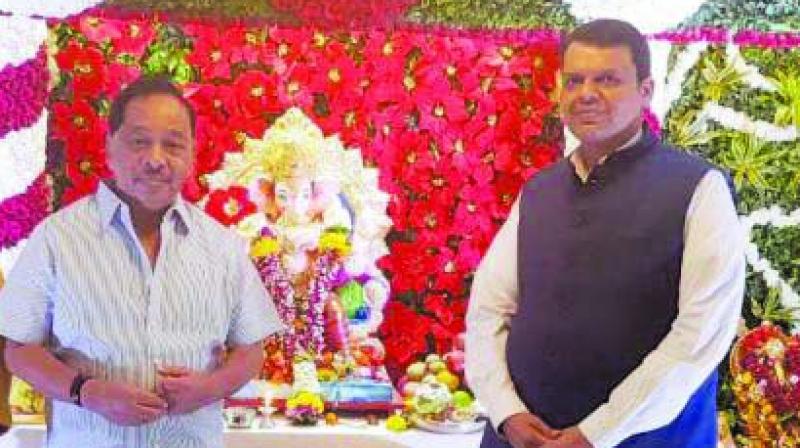 Mumbai: A cornered chief minister Devendra Fadnavis tried to broker peace with the Maratha protesters through community strongman and former chief minister Narayan Rane. Mr Fadnavis on Wednesday discussed the agitation and its repercussions in detail with Mr Rane, who asked the former to start direct conversations with Maratha leaders, keeping other ministers aside.

Mr Rane went to meet Mr Fadnavis Wednesday night. Till then, the latter appeared to have been “cornered” by his own party men. Shiv Sena leader Sanjay Raut’s statement about a “change of guard” in the state government added to speculation of Mr Fadnavis getting the proverbial cold shoulder from his party. It was against this backdrop that Mr Rane met Mr Fadnavis and extended all his help to the latter, sources said.

Having headed the cabinet committee during the Congress-NCP regime which granted 16 per cent reservation to the Maratha community which was later struck down by the Bombay high court, the “experienced” leader suggested to Mr Fadnavis to think on the same lines.

According to sources, Mr Rane asked Mr Fadnavis to find a way in terms of the state government’s recruitment of 72,000 posts. Since the Maratha community was not given reservation, it was unlikely to have reserved posts. “But if the state government goes to the court with some concrete legal solutions, it could soothe frayed nerves,” Mr Rane told Mr Fadnavis, according to sources.

Meanwhile, MNS chief Raj Thackeray slammed the state government for “playing with the emotions of Maratha youths”. He demanded that the government step down if it failed to handle the situation. Mr Thackeray also appealed to Maratha youths not to take the law into their hands.

“As Maharashtrians, we should come together. Rulers, whether present or past, will try to divide and rule. So, be peaceful and protest wisely," Mr Thackeray said. “You should not keep the people misinformed. This is the last warning (to the state government) that if it does not handle the situation, it must step down,” he said.