The MNS hit back saying Shiv Sena is suffering from loose motion as Raj continues to expose them. 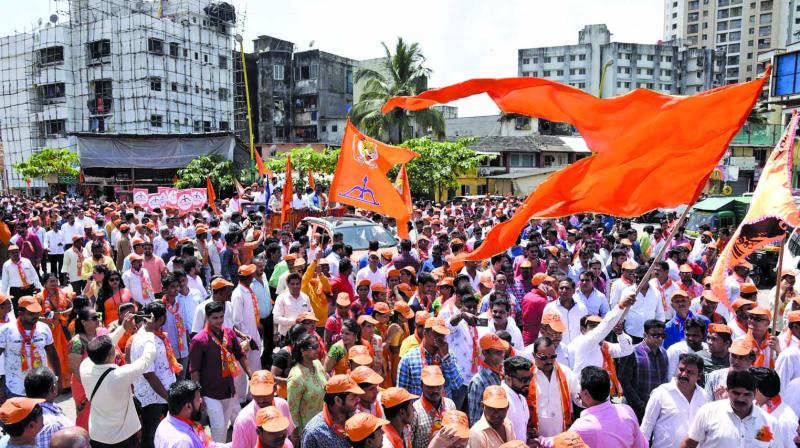 Mumbai: Launching a scathing attack on Maharashtra Navnirman Sena (MNS) chief Raj Thackeray, the Shiv Sena on Saturday said nothing justifies Raj Thackeray’s decision to change his party flag to saffron. The Sena accused Raj of making Hindutva its prime agenda in order to gain brownie points with the BJP for votes.

The MNS hit back saying Shiv Sena is suffering from loose motion as Raj continues to expose them.

Taking a swipe at the MNS chief, an editorial in the party mouthpiece Saamana on Saturday said that those alleging that the Sena had changed its colour for the sake of power should first look at their own face.

Taking potshots at Raj over his ideological shift towards Hindutva, the editorial said that it is not child’s play to deal with the Hindutva ideology as propagated by V.D. Savarkar and late party founder Balasaheb Thackeray.

“Raj and his 14-year-old party was established for the ‘Marathi Manoos’. But his party would be moving towards Hindutva. It can be said that the MNS has changed its path. But they are not going to get anything as earlier they had not done anything on the issue of Marathi Manoos,” the editorial said.

“The Sena had created awareness on the Hindutva agenda across the country. It has never left saffron. This colour will remain with us forever. Despite changing the flag of MNS, Raj’s flag would not get ideological support. The chances are less,” the editorial added.

In a tweet in Marathi, MNS spokesperson Sandeep Deshpande said, “Modern Afzal Khan has stabbed the back of Marathis and Hindus. Since MNS chief Raj Thackeray has kept his hands on the issue, the Shiv Sena is facing diarrhea through Saamana’s editorial, but don’t worry, we will treat it.”