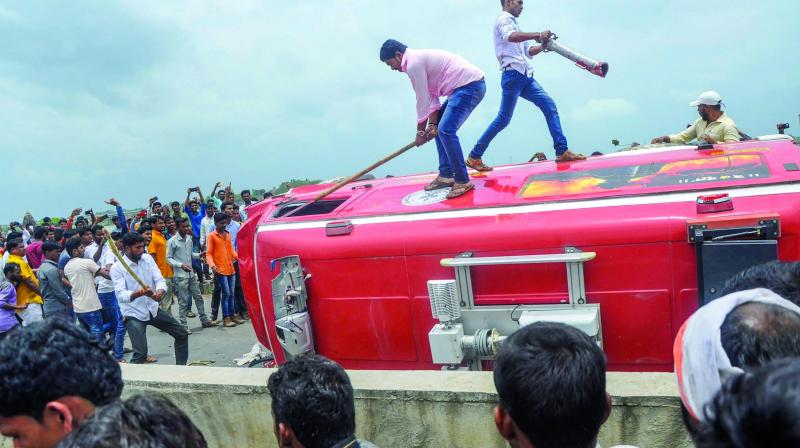 Mumbai: Even as the Maharashtra bandh called by the Maratha Kranti Morcha (MKM) turned violent on Tuesday, the oganisation has given a call for bandh in Mumbai, Thane, Raigad, Navi Mumbai and Palghar districts on Wednesday. These districts were excluded from Tuesday’s bandh. Meanwhile, a policeman died and nine more cops were injured as violence spread across the state on Tuesday.

A day after the death of a protester in Aurangabad after he jumped into a river on Monday, the seventh day of the Maratha agitation for reservation turned violent on Tuesday with two more protesters attempting to take their lives in Aurangabad district and others burnt a fire brigade vehicle. Internet services were suspended in Aurangabad on Tuesday in the Maharashtra bandh called by MKM that saw a complete shutdown of Marathwada and parts of Vidarbha and Western Maharashtra.

A 50-year-old police constable Shyam Kathgoankar died due to heart attack while on duty at Kaygoan Toka in Gangapur, Aurangabad. Gajendra Ingale, police sub-inspector, Gangapur police station, Aurangabad, said, “Kathgoankar was managing crowd of Maratha Morcha at Kaygoan Toka, a place where Kakasaheb Shinde committed suicide. He started getting chest pains and was taken to Ghati District Hospital in Aurangabad. But, he died on the way.”

He added, “He was posted with the headquarters in Osmanabad. We have asked for extra police to manage law and order situation here." Nine other policemen were injured.

The state government and Opposition parties appealed for peace, but protesters were aggressive and held rasta rokos across the state. The MKM had called for a statewide bandh on Tuesday. It mainly affected Marathwada and parts of Western Maharashtra. Aurangabad region of Marathawada, which has been epicenter of the agitation, completely shut down. Trying to commit suicide, protester Jayesh Sonawane, a youth from Devgav Rangari jumped into a Velganga river whereas, Jagannath Sonawane, 50, consumed poison. They were immediately taken to hospitals.

The state government suspended Gangapur tehsildar Chandrakant Shelake and police inspector Sunil Birla over Kakasaheb Shinde’s death. Mr Shinde died after jumping into the Godavari. On Tuesday, Shiv Sena member of Parliament, Chandrakant Khaire, had to face the wrath of Maratha volunteers when he arrived to pay tribute to Mr Shinde.

Stones were pelted at the Baramati administrative office. Protesters also blocked roads in Pune city. However, Pune still functioned despite the call for bandh.