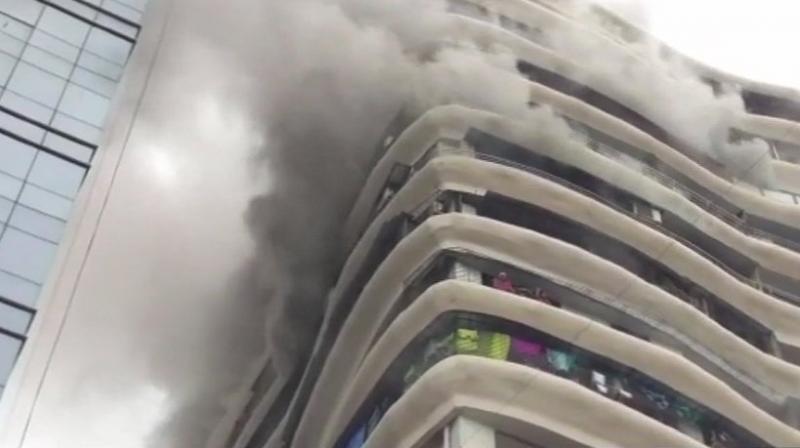 People trapped in the building are being rescued using a crane. (Photo: ANI | Twitter)

Mumbai: Four people have died after a level-3 fire broke out at Crystal Tower residential apartment in Mumbai's Parel on Wednesday morning.

The fire broke out on the 12th floor of Crystal Tower near Hindmata Cinema which gradually spread to the 13th, 14th and 15th floors.

People were rescued with help of crane and were rushed to KEM Hospital.

Confirming the deaths, Dean KEM hospital Avinash Supe said, “Total 20 victims were brought to the hospital. Four are dead, one of them a woman. Other 16 patients, six of them women, are stable.

Initially, 10 fire-fighting engines were pressed into service but later additional 10 fire brigades and four water tankers were rushed to the spot.

The fire, initially classified as Level 2, was later jacked up to Level 3.

Deputy chief fire officer R Chaudhari said, “Height and congestion proved a major challenge in fire fighting. And the building’s fire fighting system was not working, so that is a major problem in dealing with high-rise fires.”

The fire brigade control room got a message about the blaze on the 12th floor of the 'Crystal Tower' building, located near Hindmata Cinema, at 8.32 am, said an official in the fire department.

The cause of the blaze remains unknown.

On December 29, 2017, a massive fire broke out in Mumbai's Kamala Mills compound which claimed the lives of 14 people. Following the incident, the local authorities introduced several strict measures to ensure safety norms.