The protest was held as part of the BJP’s plan to hold nationwide demonstrations on the issue. 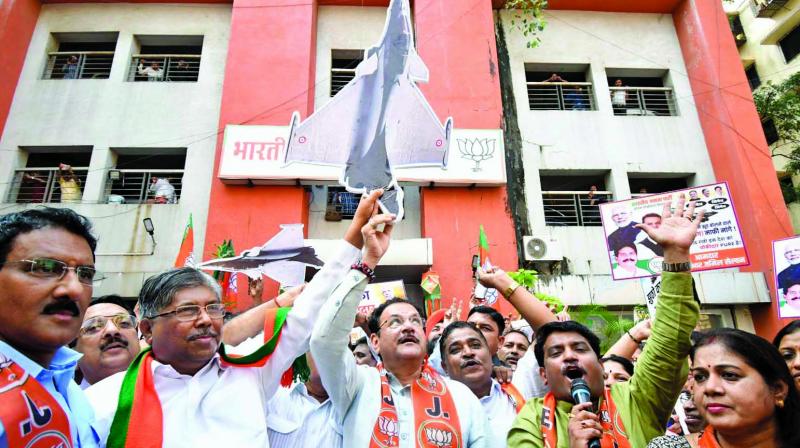 BJP leaders at the protest against Rahul Gandhi.

Mumbai: The Bharatiya Janata Party (BJP) Saturday staged a protest in the city, seeking an apology from Congress leader Rahul Gandhi following the Supreme Court's clean chit to the Modi government on the Rafale deal.

The protest was held as part of the BJP’s plan to hold nationwide demonstrations on the issue. The protesters raised slogans against former Congress president, calling him a “thief”.

Maharashtra BJP chief Chandrakant Patil said that Mr Gandhi's apology to the apex court for dragging the Modi government into the political discourse on Rafale was not enough.

“They (Mr Gandhi and the Congress) tried to humiliate the BJP and Prime Minister Narendra Modi — who has given the country pride of place in the world — only out of their self-interest. They brought ignominy to India in the world,” he said.

“Apologising before the court alone won't suffice. Mr Gandhi and the Congress should apologise to the country. The central government struck the Rafale deal to strengthen the national security,” he added.

Mr Gandhi had been critical of the Modi government over the deal to purchase 36 fighter jets from France's Dassault Aviation.

In the run-up to the Lok Sabha elections this year, Mr Gandhi had raised the Rafale issue aggressively. He often targeted the PM with his “chowkidar chor hai” jibe over the purchase of Rafale jets.