11 people, including 3 children injured in the explosion that destroyed 2-storey shanty. 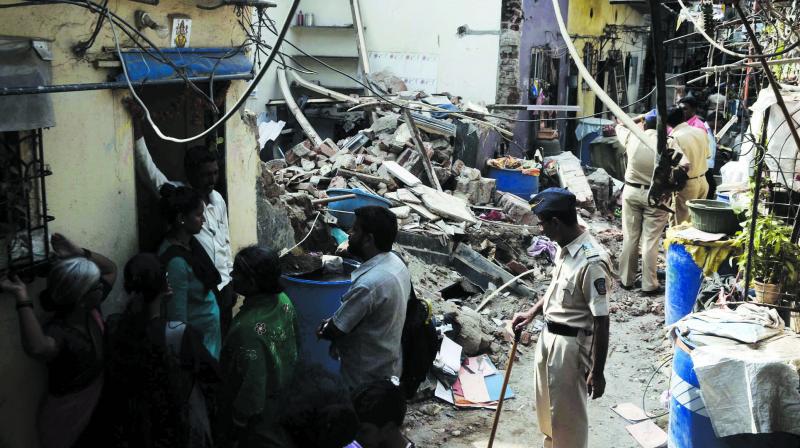 Three persons — Sanjay Wankhede (35), his wife Rekha Wankhede (30) and Sanjay’s mother Kasturba Wankhede (65) — were killed and five were injured when a building collapsed due to a cylinder explosion at Maharashtra Nagar slum, in in Mankhurd on Thursday. (Photo: Shripad Naik)

Mumbai: Three people died after a two-storey building collapsed on an adjacent house in Maharashtra Nagar in Mankhurd on Thursday morning. Eleven others, including seven children, were also injured in the building collapse and are being treated at Sion Hospital. According to hospital sources, their condition is stable. A total of three families lived in the two houses.

The two-storey structure collapsed around 5.30 am on Thursday, due to the impact of a blast from a leaked LPG cylinder at the home of the Gadhve family, who live on the ground floor of the building. Since the walls of the ground floor were weakened due to the blast, the top floor collapsed on an adjacent house, which belongs to the Wankhede family, killing three adult members of the family. Two children from the family, Pratik Wankhede (7) and Vishakha Wankhede (13), were rescued by neighbours within minutes of the building collapse and were rushed to Shatabdi Hospital, from where they were shifted to Sion Hospital. The dead people have been identified as Sanjay Wankhede (35), his wife Rekha Wankhede (30) and Sanjay’s mother Kasturba Wankhede (65).

Ravindra Rajguru, Wankhede’s neighbour and the local committee chairman of the Saibaba Rahiwashi Sangh, said, “LPG from the cylinders must have been leaking all night. As soon as Shobha tried to light the gas stove, a blast took place, and then the building collapsed. We safely removed three gas cylinders from the three houses to prevent further blasts.”

As soon as neighbours heard the blast, they rushed out of their houses to see the building collapsing before their eyes. They began to clear the debris within minutes and first rescued Pratik and Vishakha, along with Swati, Kadambar and Rudra Pawar. But they could not lift the chunk of wall under which Sanjay and Rekha Wankhede were buried, and called the fire brigade at 6.10 am. Fire officials then pulled out Sanjay, Rekha and Kasturba by 6.30 am, but they were declared dead when they were taken to Shatabdi and Sion hospitals.

P. Rahangdale, chief fire officer, Mumbai fire brigade, said, “We got a house collapse call at 6.10 am, which turned into a fire call around 9 am. The fire was confined to household items, and did not spread to the neighbourhood area.”

The Mankhurd police has not registered an FIR in the case yet.