The patient is a 25-year-old man who suffered a gun-shot injury to his face. 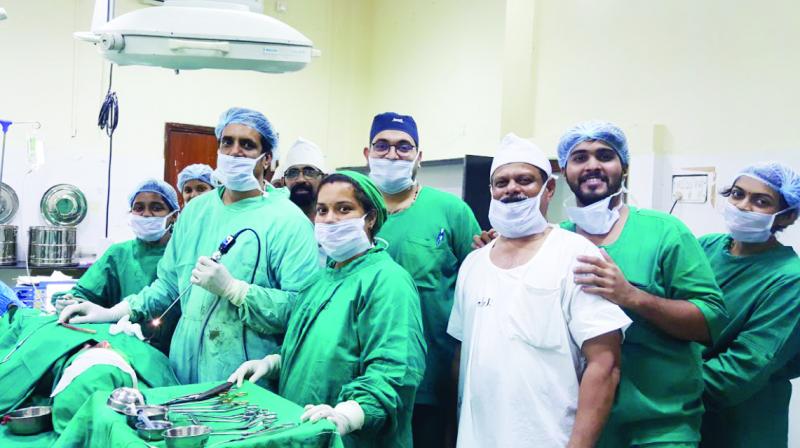 Tanvir seen with the doctors operating on him.

Mumbai: A rare endoscopic nasal surgery for removing a bullet without incision was performed Wednesday at state-run J.J. hospital on a 25-year-old, who suffered a gunshot injury to his face. In a robbery which took place on December 6 at Gorakhpur, Uttar Pradesh, the youth was hit by a bullet which pierced him near his right eye and forehead and got lodged somewhere behind his left eye socket.

After doing the rounds of several hospitals in UP, the youth, Tanvir Ahmed Imtiyaz, was finally admitted to the ear, nose and throat (E.N.T.) department of J.J. hospital on December 11. MrImtiyaz had a swelling around the affected eye and was unable to breathe. Dr. SunitaBaghe, assistant professor, E.N.T. department, told The Asian Age, “The patient came to us with a live bullet lodged in the left orbit and maxillary sinus. The X-ray showed that the bullet was lodged in a difficult area as we could not have harmed other vital organs while removing it. It is the first such surgery performed by us.”

Dr KarthikRao said, “MrImitiyaz was taken to the E.N.T. operation theatre, where the live bullet was removed with a totally endoscopic approach with partial reconstruction of the floor of orbit. So, three things were done in one surgery – removal of bullet, reconstruction of that part, and reducing pressure where some of the part had got inflamed due to presence of the bullet.”

Head of department, DrShrinivas S.Chavan said that MrImtiyazwas fine and would be discharged within a week’s time. This is the first such surgery to be performed in a government hospital across India, without any incision, cut, scars or stitches.