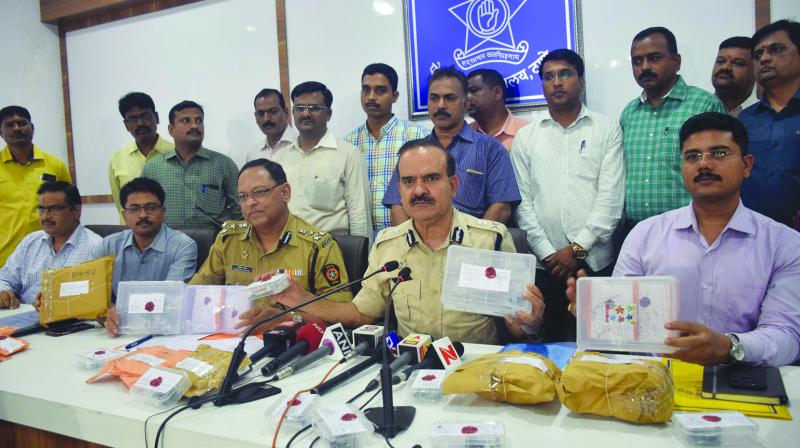 The Thane police held a press conference on Wednesday where they gave out the latest developments in the case. (Photo: Deepak Kurkunde)

Mumbai: After arresting software engineer Prashant Nulkar, who is an employee of a firm making anti-fraud software for fuel stations on Tuesday, the Thane police has brought 14 more men under its scanner for their alleged role in manipulating fuel-station vending machines with electronic chips, to ensure less fuel than what is paid for, is sold to customers. Nulkar, who is described as the alleged mastermind of the petrol-pump scam by the cops, apparently used his experience with the firm in making and selling thousands of ‘cheat’ chips.

Nulkar is also accused of having trained another key accused ‘cheat’ chip maker, Vivek Shete, an MSc in electronics from Dombivali, who sold more than a 1,000 chips to dealers in UP and the state. Nulkar is accused of selling such ‘cheat’ chips abroad, to persons in Saudi Arabia, Dubai (UAE), China and Abu Dhabi (UAE).

“Prashant Nulkar is working with MIDCO from 2006, a company which makes petrol pump software as well as installation of machines. He was in touch with several petrol pump owners in Maharashtra since then. Few years ago, he had learnt how to tamper the software and make cheat chips which control the petrol limit. He then started getting all equipment from one of the China based dealer after which they started selling chips out of India,” said  a police officer.

The Thane CP, Prambir Singh said, “He had trai-ned few of the accused, including Dombivli resident and main accused Shete, in tampering petrol machines and making chips. He had created a group of fraudsters who used make cheats chips and Shete used to provide them commission for the same. Most of the business was handled by Shete later, because of Nulkar’s poor health.” Nulkar had lost one of his kidneys and was suffering from several other diseases. He was earlier living in Maharashtra, but then moved to Hubali and started handling the scam from there.

Last month, the Thane cops had prepared a list of 100 petrol pumps, which were under suspicion for using electronic chips to manipulate their fuel discharge, giving less fuel than shown on the receipt.