Chief minister made the announcement when he visited Chaityabhoomi. 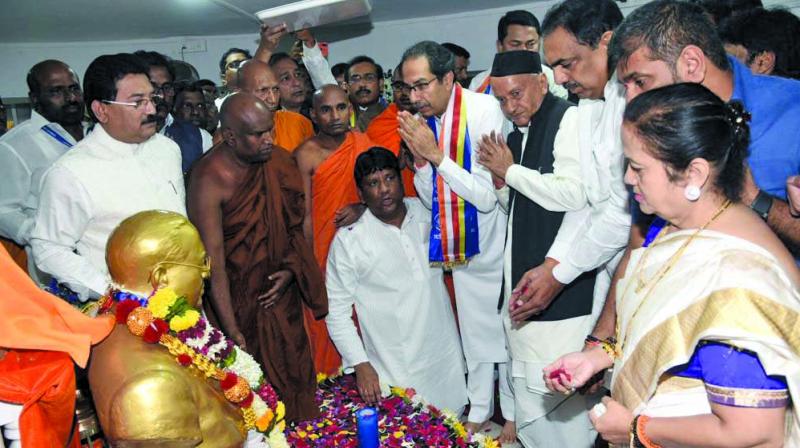 Mumbai: Chief minister Uddhav Thackeray Friday announced that a house in the BIT chawl at Parel, where Dalit icon Dr B.R. Ambedkar lived for over two decades, would be converted into a national memorial.

The chief minister made the announcement when he visited Chaityabhoomi at Dadar, Dr Babasaheb Ambedkar’s resting place, on the occasion of his 63rd death anniversary.

He declared that room numbers 50 and 51 in the BIT chawl number one at Parel where Dr Ambedkar lived would be converted into a national memorial.

Dr Ambedkar lived in the said rooms near Damodar hall, Parel, from 1912 to 1934. He spent his childhood and 22 years of his life in these rooms.

In his time, Chhatrapati Shahu Maharaj, the ruler of Kolhapur, visited these rooms to meet the brilliant Dr Ambedkar.

After making the announcement, Mr Thackeray visited the rooms and met the Tadilkar and Khaire families who live there.

Since many years, Dr Ambedkar’s followers had been demanding that his house be converted into a memorial to preserve the memories attached to it.

On Thursday, Nationalist Congress Party (NCP) MLA Jitendra Awhad, too, had demanded the same. He even submitted a letter to the Mr Thursday seeking that the rooms be converted into a memorial.

Mr Awhad expressed happiness over the CM’s announcement and said that a long-awaited wish had been fulfilled.

A few years ago, the Bharatiya Janata Party government led by Devendra Fadnavis had also bought the house in London where Dr Ambedkar spent a few years during his stay there.

Apart from his contribution to the field of politics, Dr Ambedkar was also an eminent economist, anthropologist, historian  and philosopher.

In fact, Dr Ambekdar, as an economist, is also considered the driving force behind  the establishment of the Reserve Bank of India, which began functioning in 1935.