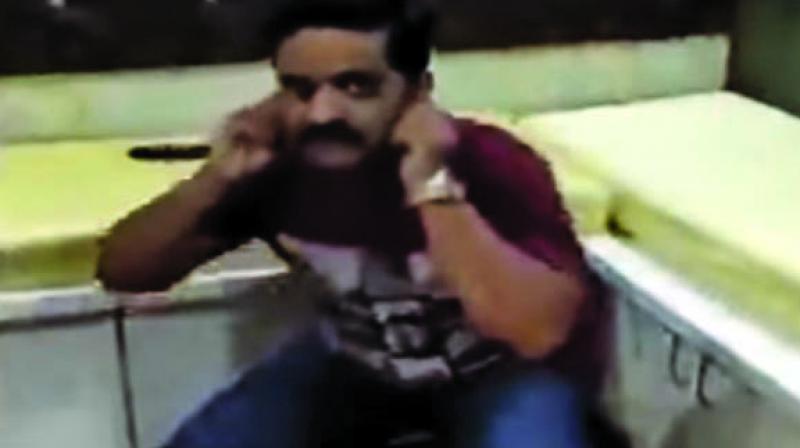 A screengrab of the video that went viral.

Mumbai: In yet another incident of Maharashtra Navnirman Sena (MNS) men assaulting vocal critics of their party chief Raj Thackeray on social media, party workers made an Ambernath resident, Sandeep Tiwari, perform sit-ups after he posted a message criticizing the leader. A video of Mr Tiwari performing his “penalty” and begging for Mr Thackeray’s forgiveness has gone viral on various social media platforms. While Mr Thackeray has been likening Prime Minister Narendra Modi to German dictator Adolf Hitler at rallies across the state, a group of MNS workers recently barged into the residence of a Ghatkopar resident and thrashed him for alleged objectionable online comments against the party president.

MNS workers from Ambernath had brought Mr Tiwari from his Dhara Residency home and to the MNS office at Ambernath where party workers allegedly beat him up. He was then allegedly asked him to do 25 sit-ups and apologise to Mr Thackeray.

In the video, Mr Tiwari is seen stating with folded hands: “By mistake I have sent video and for the same I am apologising Raj Thackeray.”

Justifying the actions of the workers, MNS spokesperson Sandeep Deshpande said, “In a democracy everyone has the right to express, comment and criticize. But criticism should not be below the belt. Those who will use bad language against Raj Thackeray will be beaten up by MNS party workers.”

Terming Mr Tiwari a Bharatiya Janata Party (BJP) supporter, Mr Deshpande said, “We will not file any complaint against such troll because we know that no action will be taken against them by the police. He is a BJP supporter. We have not spare any BJP party worker who used bad words against our party chief and we will not spare trolls in the future either.”

At the party’s 13th anniversary gathering, the MNS chief in a speech ordered his workers to rough up people who use bad words.

Apart from the Ghatkopar incident, party workers had beaten up a youth from Nashik who had written against Mr Thackeray while in Aurangabad, a youth was inked and beaten up by party workers.