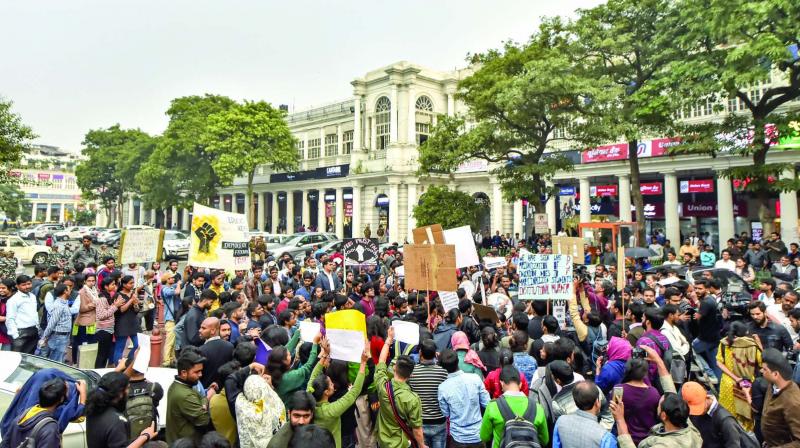 Students of Jawaharlal Nehru University and other educational institutions raise slogans during a protest at Connaught Place in New Delhi on Wednesday. (Photo: PTI)

New Delhi: Hundreds of students from across Delhi formed a human chain in Connaught Place on Wednesday in solidarity with the Jawaharlal Nehru University’s Students’ Union (JNUSU), which is protesting against the hostel fee hike.

The JNUSU had urged universities and students across India to observe November 27 as the National Protest Day in support of affordable and accessible education. Carrying banners with messages like “oppose new education policy 2019”, “extremists have shown what frightens them most — a girl with a book”, “fee must fall”, the students formed a human chain around Central Park in the inner circle area of Connaught Place. They were beating tambourine and raising slogans of “halla bol”.

“We want complete rollback of the fee hike. The JNU movement has led to positive changes in IIT and AIIMS and we are happy. The ‘fee must fall’ movement was not for the JNU but for the entire country and today, JNU alumni in West Bengal walked for us in support,” JNUSU president Aishe Ghosh said. She said the JNU is not an island and whatever is happening in the university is also happening in other educational institutions.

“There was a similar movement in South Africa in 2015 and our movement has now become a national movement,” Ghosh said. “We appeal that the recommendations of the HRD high-powered committee be made public. We are thinking to writing to the ministry to make them public,” the JNUSU president added.

The three-member committee, comprising former UGC chairman V.S. Chauhan, AICTE chairman Anil Sahasrabudhe and UGC secretary Rajnish Jain, was set up on November 18 to recommend ways to end the impasse between university administration and students over a hostel fee hike. It has already submitted its report to the ministry.

The JNU Teachers' Association on Wednes-day also observed the “National Protest Day in Defence of Public Education” in JNU with a two-hour dharna at Ganga Dhaba.

The agitation over the hike in hostel fee escalated on November 11 when thousands of students clashed with police outside the All India Council of Technical Education (AICTE) premises, where the JNU’s convocation was being held. Union HRD minister Ramesh Pokhriyal “Nishank” was stranded for over six hours at the venue. The JNU’s executive council had then announced a partial rollback of the hike for students belonging to the BPL category and not availing any scholarships. However, the protesters dubbed it as an “eyewash”.

A week later, students undertook a march from the JNU campus to Parliament but were stopped at multiple locations by police.