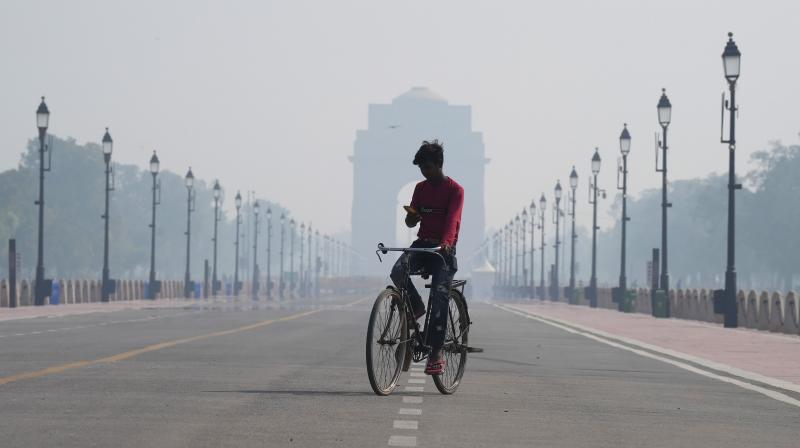 New Delhi: The air quality in Delhi on the morning after Diwali was recorded in the 'very poor' category but the situation was relatively better than previous years due to favourable meteorological conditions which diluted the effect of firecrackers and stubble burning.

The capital's air quality index (AQI) stood at 326 at 8 am on Tuesday.

The relatively better air this morning doesn't mean it's good air. The PM2.5 levels at 30 out of the 35 monitoring stations in the capital were five to six times the national standard of 60 micrograms per cubic metre at 8 am.

PM2.5 are fine particles that are 2.5 microns or less in diameter and can travel deep into the respiratory tract, reaching the lungs and entering the bloodstream.

Though people burst firecrackers in several parts of Delhi despite a ban on them, the intensity appeared less as compared to the last two years.

The Delhi government had in September announced a complete ban on the production, sale and use of all types of firecrackers till January 1, 2023, including on Diwali, a practice it has been following for the last two years.

Farm fires raged across Punjab and Haryana on Monday but the wind speed was moderately unfavourable for the transport of smoke. Hence, the contribution of stubble burning to Delhi's pollution (around 10 per cent) was also "not very significant", said Gufran Beig, chair professor, National Institute of Advanced Studies, Indian Institute of Science.

Emissions from firecrackers and farm fires have contributed significantly to Delhi's PM2.5 pollution on Diwali over the years.

Their share this year was relatively less than previous years due to reduced firecrackers bursting and moderately warm and windier conditions which prevented rapid accumulation of pollutants.

Diwali was celebrated on November 4 in 2021 and on November 14 in 2020 when temperatures were considerably low and winds calm.

According to the Early Warning System of the Indian Institute of Tropical Meteorology (IITM), the air quality is predicted to remain in the 'very poor' category during the day (Tuesday) and is likely to improve slightly over the next two days.

Delhi recorded a 24-hour average AQI of 312 at 4 pm on Monday -- the second best for Diwali day in seven years.

On Sunday evening, the city reported a 24-hour average AQI of 259, which was the lowest for Diwali eve in seven years.

"The share of PM2.5 in Delhi's air has increased which is indicative of contribution from firecrackers and stubble burning," said Beig, also the founder project director of SAFAR, a forecasting agency under the Union Ministry of Earth Sciences.

"Though the active fire counts have doubled, the wind direction is north westerly and the wind speed is moderate (not very favourable for the transport of smoke from farm fires). Hence, the contribution of stubble burning is not very significant," he said.

Stubble burning is likely to account for 12 to 15 per cent of Delhi's PM2.5 solution on Tuesday, he added.

The Indian Agricultural Research Institute reported 1,019 farm fires in Punjab, 250 in Haryana and 215 in Uttar Pradesh on Monday evening.

The System of Air Quality and Weather Forecasting and Research (SAFAR) had earlier predicted that the air quality in Delhi will be recorded in the 'very poor' category if no firecrackers are burst.

In case firecrackers are burst like last year, the air quality may plunge to 'severe' levels on the night of Diwali itself, it had said.

Delhi Environment Minister Gopal Rai had earlier said bursting of firecrackers on Diwali in the city will attract a jail term up to six months and a fine of Rs 200.

He had said production, storage and sale of firecrackers here will be punishable with a fine of up to Rs 5,000 and three years in jail under Section 9B of the Explosives Act.

A total of 408 teams have been constituted to implement the ban. The Delhi Police has set up 210 teams under assistant commissioners of police, the Department of Revenue has set up 165 teams and the Delhi Pollution Control Committee has constituted 33 teams.