Air quality improves due to strong winds, but still ‘poor’

The national capital witnessed a dip in pollution levels on Saturday morning even as the air quality in the city remained in the “severe” category. 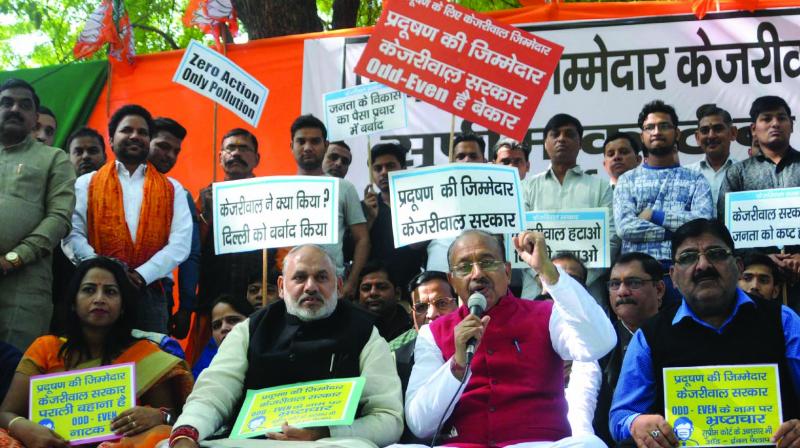 BJP MP Vijay Goel with supporters during a protest at Jantar Mantar in New Delhi on Sunday. (Photo: ASIAN AGE)

NEW DELHI: Delhiites got some respite from pollution on Sunday as the air quality in the city improved to “poor” category from the “severe” category.

The national capital witnessed a dip in pollution levels on Saturday morning even as the air quality in the city remained in the “severe” category.

Delhi chief minister Arvind Kejriwal on Sunday asserted that there is a “very strong correlation” between stubble burning and pollution in north India as he attributed the improvement in air quality to dip in cases of setting crop residue afire.

Mr Kejriwal and the ruling AAP have been at the forefront of blaming stubble burning in neighbouring Punjab and Haryana as one of the major reasons for high levels of air pollution during winters in Delhi.“A very strong correlation can be seen between stubble burning and the spike in air pollution in North India. As soon as stubble burning began in the first week of Oct, the AQI started rising. Now that burning is coming to an end, air quality is also improving’” the chief minister tweeted.

In another tweet, the chief minister said, “ The stubble burning has stopped and with it, the air quality in Delhi has improved. “A few people say that stubble burning contributes only 5 per cent to air pollution in Delhi. So with reduction of only 5 per cent, has the air quality index improved from over 500 to 200? Rather than doing politics on pollution, there is a need to address the issue together with good intentions”.

The BJP has been hitting out at Arvind Kejriwal government for “not doing anything” to control air pollution in the past five years and bringing in odd-even road rationing scheme as Assembly polls are approaching.

Senior BJP leader and Rajya Sabha MP Vijay Goel said if the Kejriwal government thinks stubble burning is the main reason for harmful air quality in Delhi then why did it resort to the Odd-Even scheme.

The Delhi government will take a final call on Monday whether or not to extend the scheme, which was implemented from November 4-15, considering the current situation of air pollution.

Over 70 per cent parents in Delhi and NCR believe there should be a scheduled “smog break” in schools from November 1-20 every year, according to a new survey.

The survey, with nearly 10,000 respondents from Delhi-NCR region, has also found that parents want that leaves of the smog break be compensated with reduction of leaves from the summer, winter, and spring breaks combined to ensure the study calendar is not affected.

“From Delhi, Faridabad, Ghaziabad, Noida, and Gurgaon, 74 per cent parents want that there should be a scheduled smog break from November 1-20 every year when the air quality is at its worse,” says the findings of the survey.