Citizenship Bill: Now we can fly like bird, say Pakistani Hindus in city 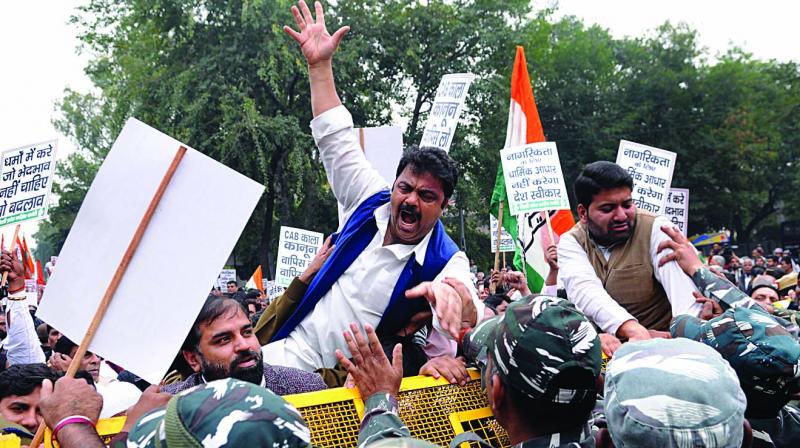 DPCC members try to cross barricades during a protest against the CAB in front of BJP office in New Delhi on Wednesday. (Photo: Biplab Banerjee)

New Delhi: Fireworks, whistles, loud cheers, and claps summed up the festive mood among Pakistani Hindus in the Majnu Ka Tila area here as Rajya Sabha passed the Citizenship (Amendment) Bill, stamping the seal of home for them in India.

Her grandmother Meera Das (40) said that the baby was born on Monday and the family decided to name her “Nagrikta” anticipating the bill would clear the Rajya Sabha hurdle.

“We came to India eight years ago in the search for safe haven. It is the only home for us. But the lack of citizenship would hurt. Now, we are proud Indians, we can fly like a bird,” she said. During the day, people huddled around a radio while some scoured their phones for news on the passage of the legislation.

The makeshift tents and unplastered walls with metal roofs in Majnu ka Tila area are home to about 750 Pakistani Hindus who fled the neighbouring country to seek refuge here. Many others live in resettlement colonies in Rohini Sector 9 and 11, Adarsh Nagar and near the Signature Bridge. Among them is 42-year-old Sona Das, who left his home in Hyderabad, Pakistan,  and came to Delhi on a cold winter night in 2011, not knowing what would become of him and his family.

After multiple protests, court cases and eight years, Das, his wife and nine children, the youngest just eight, are looking to the bill to give them stability.

“Municipal bodies have made arrangement for water. But there is no sewer network. The city government doesn’t listen to us because we do not have voting rights,” Das said. The bill seeks to give Indian nationality to non-Muslim refugees from Pakistan, Bangladesh and Afghanistan who came to India before December 31.