JNUSU president Aishe Ghosh, however, termed the meeting as “unsatisfactory” and gave a call to continue the march to Rashtrapati Bhavan. 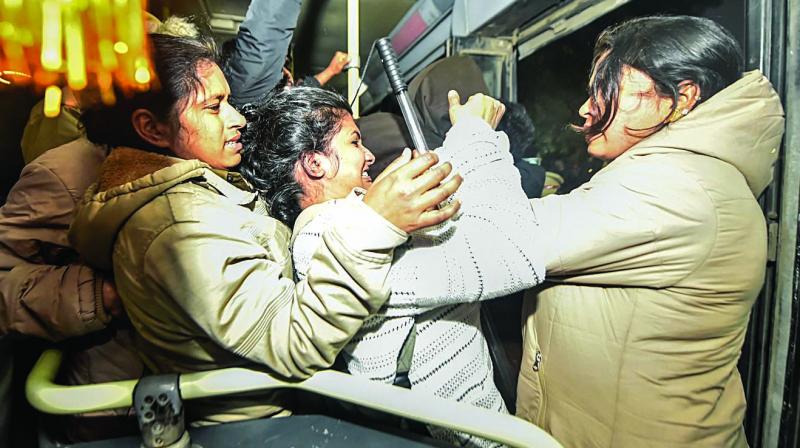 Delhi Police roughs up and detains Jawaharlal Nehru University students who were protesting outside the Shashtri Bhawan against the January 5 violence on the university campus in New Delhi on Thursday.

New Delhi: Hundreds of JNU students, who tried to march towards the Rashtrapati Bhavan on Thursday protesting against the violence inside the campus, were allegedly manhandled by the Delhi police.

The police also resorted to baton charge to control the mob, owing to which several students sustained injuries. Eleven students, who were detained and taken to the Mandi House police station, were later released in the evening.

Before the students tried to proceed towards the Rashtrapati Bhavan, a nine-member delegation of the university’s student and teacher Unions met the HRD ministry officials and demanded removal of vice chancellor M. Jagadesh Kumar from his post.

The police took the delegation to the ministry after they were initially stopped near Shastri Bhawan.

JNUSU president Aishe Ghosh, however, termed the meeting as “unsatisfactory” and gave a call to continue the march to Rashtrapati Bhavan.

Addressing the protestors, JNUSU president Kanhaiya Kumar said that actress Deepika Padukone was patriotic when she was an ambassador for a Modi-government initiative, but turned anti-national after visiting JNU. He said that there was no “tukde tukde” gang before BJP assumed power at the Centre in 2014.

“Tukde tukde” gang is a term used by BJP to refer to the alleged sympathisers of separatists. On Thursday morning, hundreds of demonstrators, including students and members of civil society, hit the streets protesting against the recent violence at JNU and demanding resignation of the varsity vice-chancellor.

Carrying placards and banners, the protestors started marching from Mandi House towards the HRD ministry in Shastri Bhawan. Slogans of ‘Halla Bol’ and ‘Inquilab Zindabad’ rent the air as the agitating people waited for JNU students to arrive at the protest venue.

Banners with messages such as ‘No CAA, No NRC,’ ‘Ban ABVP from university campuses,’ ‘Reject Violence,’ and ‘Education is not a commodity to be bought or sold’ dotted the swelling crowd that demanded strict action against those involved in the campus violence.

The JNUSU has been demanding a rollback of the hostel and mess fee hike and had boycotted the registration process for the next semester.

The HRD ministry on Thursday ruled out the removal of JNU vice-chancellor M. Jagadesh Kumar amid demands from students and a section of teachers saying sacking him is not the solution and the government's focus is to address the main issues that have cropped up on campus.