A communinity living without an identity, are the Afghan refugees. 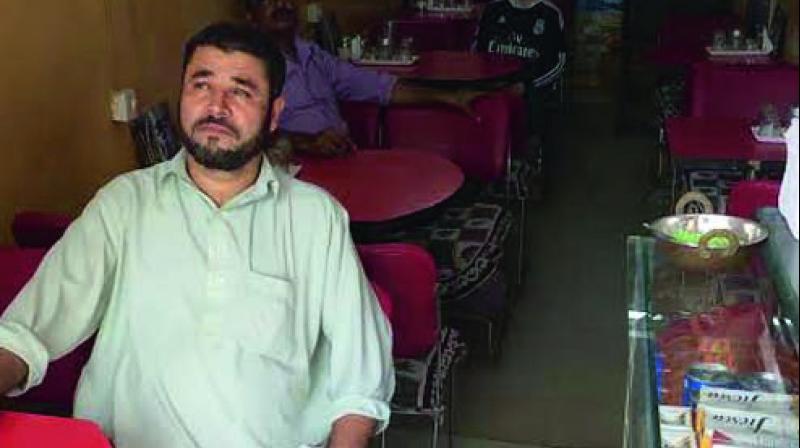 Hajii Akhtar, in his restaurant

New Delhi: Imagine leaving your native country with the only identity you had and migrating to another country with high hopes of living a safe and better life. Thereafter, try putting yourself in the shoes of people who only have a UNHCR issued refugee card. It is hard to imagine and even harder for them to survive.

A communinity living without an identity, are the Afghan refugees. Their life is not as easy as it seems. Despite having managed to move out of a wartorn country to protect themselves, their hardships never seem to end.

Haji Akhtar, owner of a restaurant on the outskirts of Hauz Rani facing Max Hospital, moved to India seven years ago with his wife and five children to provide them with a good education. Originally from Mazar-I-Sharif, the family lives in a small two-room apartment. Speaking broken Hindi, he tried to explain his anguish regarding the high rent rates and small sized apartment.

A reason for this is the immoral behaviour of the landlords who dupeS them by charging high rent rates. “Three years ago, when I was looking for a space to open my restaurant, I had paid the advance and security to the landlord but he rented it out to somebody else and kept my money as well,” Akhtar said.

Police constables threaten him of shutting down the restaurant. Not only that, but they eat and drink there for free and sometimes even ask for money on a monthly basis. “They don’t make a licence on the refugee card and therefore, many a time, I am stopped by the traffic police who take money before letting me go,” he added.

People from his community migrate in search of shelter and a chance at earning a living. Born and brought up in Mazar-I-Sharif, Najeeb Ullah migrated to India in 2013 and collaborated with an Indian citizen to open the Afghan General Store in Lajpat Nagar. With a hope to persue a life in India, Najeeb Ullah also does not have any identity proof except his refugee card which does not work as proof to open a bank account, buy vehicles or property. “My only plea to the government is to at least issue us some identity proof as many of us wish to settle down in the country with our families.”

The problem we faced in Afghanistan was the war with the Taliban. Bombings can never be predicted and it would take place anywhere on the streets, schools, restaurants or the masjid’s said Najeeb. He added, “The situation is dreadful in Afghanistan. If you leave in the morning you may not come home in the evening.”

The refugees do not get any compensation from the government. The UNHCR only provides them with sops, says Haji Akhtar. It provides free education to refugee children, says Mohammad Rafeeq, who came here seven years ago with his mother and six brothers after the death of his father. He added, “UNHCR provides medicines at a 50 per cent discount.”

Rafeeq has been switching various jobs, including being a manager at a restaurant, kitchen and hospital, in search of ways to feed his family.

“If at all the government happens to provide us with an identity, many Afghans would be willing to come to India,” said another Afghani refugee at the general store.

“Afghans like India and its people. There is no other place like India, especially Delhi. India provides us immense freedom.” said Najeeb Ullab.