On a cycle for girl child

On her journey Sunita met a youth who wanted a life partner like her. 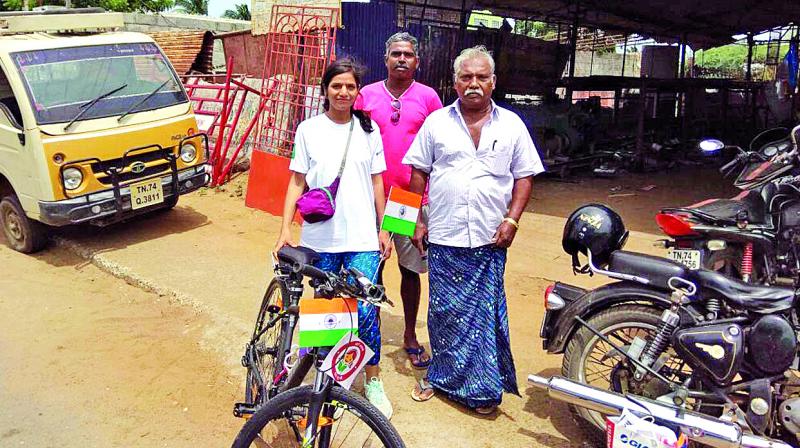 The monsoon hit her ride on the fourth day while travelling to Palakkad and accompanied her for more than 70 kilometres.

Sunita Singh Choken, a native of Haryana, is on a solo trip. However, it is not a journey to beat the stress. She is travelling to Kashmir on her bicycle to make people aware of the need to let their girl children dream big.

“I want to send a message to all, especially to the girls, that you should dare to dream and have the courage to fulfil your dreams as each one of you has the potential,” reads the blog post by Sunita, who kicked off her journey from the Vivekanand Memorial Rock in Kanyakumari on July 15. Her travel is funded by Omni Sangha, an NGO that works towards the betterment of humanity.

From Kanyakumari, Sunita reached Thiruvananthapuram in six hours. “The journey was an amazing experience. I met so many people as I cycled my way through the small hamlets,” she says.

Her mission gained momentum on the second day. Many people came to meet her and some like Dr Narayan Kutty even joined her for a small distance. Sunita had a great time tasting the delicious food of Kerala. Her second day concluded at Kayamkulam, where she stayed at the Ramakrishna Mission Ashram.

On her third day, Sunita was thrilled to meet Joby Mathew, a paralympic athlete, in Aluva. She covered 130 kilometres on that day in seven hours and 30 minutes.

The monsoon hit her ride on the fourth day while travelling to Palakkad and accompanied her for more than 70 kilometres. But, it couldn’t tarnish her spirit. “My new cycle was beyond recognition, covered with slush and mud, and my white T-shirt had turned brown.  My only pair of shoes was drenched in water,” she says.

In Kerala, language has never been a barrier for Sunita. People were curious to know about her and took selfies with her. One young man even confessed his desire to have a life partner like her, which Sunita brushed aside saying she was too old for him.

She concluded her fourth day of journey in Palakkad, where she stayed with the family of Dr Narayan Kutty’s friend. She crossed the Kerala border on the fifth day. Sunita, who conquered the Everest in 2011, will conclude her journey at Khardug La on Independence Day. She updates her experience on the blog ‘offroadersblog.com’.