Ten places you must add to your wish list while travelling to Rajasthan. 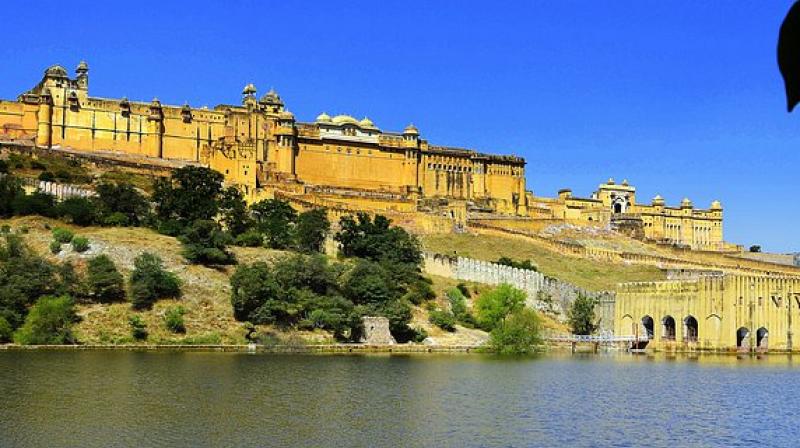 All across the state you will see many palaces and fortifications, magnificent in their architecture and speaks the tales of a time when Rajasthan was under the reign of Rajputana rulers, flourishing to its glorious best.

This northern state of India paints a very royal and vibrant picture of India. The extensive desert with its royal palaces and forts and camel rides and colourful markets will definitely sweep you off your feet! Book customised tours to Rajasthan to get a taste of this royal state while keeping your travel style in mind.

Must Visit Places In Rajasthan

Amer Fort was built at a time when the city of Jaipur was still under construction and stands as a testimony to the flourishing of Amer (now Jaipur). The fort sits atop a hill, overlooking the beautiful Maota Lake and a great specimen of the architectural styles of the Mughal era.

Inside the fort, there are many beautiful halls, temples and gardens, the significant ones being the Diwan-e-Aam (public hall), Sheesh Mahal – an entire hall adorned in mirror work and Sukh Mandir – made of sandalwood, marbles and ivory that served as a resting place for the royals.

The light and sound show that takes place in the evening, depicting the tales of the fort’s history is quite impressive as well.
Location: Jaipur, Rajasthan

This 15th-century fort is declared as a UNESCO World Heritage Site and it holds a very significant place in the history of our country. The great Rajput warrior Maharana Pratap was born in this fort and along with the Chittorgarh Fort formed the stronghold of Mewar region.

The fort was built strategically amidst the 13 peaks of Aravalli ranges, which made it a, almost impossible to breach the fort defences. From the top of the Kumbhalgarh Fort, you can get some of the most scenic panoramic views of the surrounding countryside.

The Chittorgarh Fort is another UNESCO World Heritage Site and is the grandest fort that you will see in the state of Rajasthan. The fort was built in the 7th century and it is from here that the Rajput Kings ruled the region of Mewar.

Chittorgarh Fort is also the place where the brave queen of Chittor, Padmavati, performed the Jauhar ceremony (self-immolation) along with other noble ladies when the Maharaja of Chittor was defeated by Alauddin Khilji.
Location: Chittorgarh, Rajasthan

Nahargarh Fort is another prominent fort in Rajasthan. It was initially named as Sundargarh Fort but later the name was changed to Nahargarh.
The fort is a great specimen of the architecture surrounding the Rajput era. The long wall that connects the Nahargarh with the Jaigarh Fort is the most prominent structure in the fort.

From the fort top, you can see a bird’s eye view of the surrounding area.
Location: Jaipur, Rajasthan

This 17th-century fort located in Alwar, Rajasthan is not a place for the faint-hearted. But if you are one of those who has a knack for spooky things then you can definitely head to this.

This place is said to be inhabited by spirits and ghosts and considered as the most haunted place in India. When you drive up to the fort, the drive itself can be quite creepy with nothing but deserted villages and ruins for miles before the fort.

There is even a board set up by the Indian government that restricts entry to the fort after dark.

The fort is also one of the few living forts in the world and the only one in India. One-fourth of Jaisalmer’s population still dwells within the fort, making it a very unique destination to visit.
Location: Jaisalmer, India

Hawa Mahal is a unique architectural structure in Jaipur, Rajasthan. The pink and red sandstone structure will definitely get you awestruck.
The Mahal is designed in a honeycomb-like structure with as many as 953 ‘Jharokas’ (windows).

The city palace was built during the same time when the city of Jaipur was built and the Maharaja of Jaipur had his seat in this Palace. The palace is a beautiful example of the Mughal and Rajput architectural fusion with prominent buildings like Mubarak Mahal and Chandra Mahal forming a part of the Palace complex.
The Palace also has an artisan’s section where you can buy souvenirs.

Located in the city of Jodhpur, Mehrangarh Fort is situated on a hill about 400 feet high from the city. This 15th-century fort is one of the largest forts in India. And is still run by the Royals in Jaipur City.
From the fort, you can get some of the most beautiful panoramic views of the city of Jodhpur.Location: Jodhpur, Rajasthan

Maharaja Sawai Jai Singh II was a pioneer in astronomy and he built five similar observatories in five different parts of India that includes Delhi, Mathura, Varanasi, Ujjain and Jaipur, which are known as the Jantar Mantar observatories.
These observatories were used to observe eclipses and measure time.
Location: Jaipur, Rajasthan

Here you go, these are some of the most popular places to visit in Rajasthan. When you visit Rajasthan make it a point to visit these beautiful forts and structures so that you can truly appreciate the Royal heritage of our country.