Cinderella and Snow White’s evil stepmothers are well past their expiry date by and large and new age step-parents are bonding well with the kids. 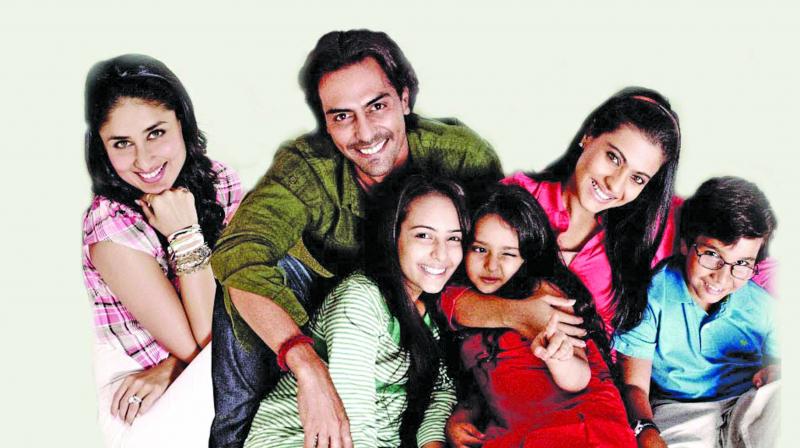 Still from We Are Family

“Very good, my little Sonia, now you must finish your greens” said my companion at lunch fondly directing her little daughter to eat green vegetables. Certainly daughters, especially little ones at that endearing age of three, do bring on the mush with their doting mothers I thought. Never once had I suspected that the little girl was not Rashmi’s daughter by birth. She’s that prejudiced word — her ‘step-mother’.

We all remember Cinderella’s and Snow White’s evil stepmothers. Such stepmothers are now definitely off the shelves and past their expiry date by and large. It’s a new age of young things taking up in the arms the child from their spouse’s previous marriage and bringing it up minus angst, bitterness, hostility and ill-will. Certainly, it is not a sweeping generalisation, but the trend is optimistic for the new generation step-children.

It is increasingly the age of young wives bonding with the daughters or sons of a spouse from a previous marriage, especially if they are of a similar age. So many times you see a man marrying a woman the age of his daughter or vice versa. And while it might not be a case of undying love, or high emotional upsurge, they do fun things  together as a family where the kids and the step-parent definitely make the effort to get along and make it work as best as it can for the sake of getting on with more important considerations of life. I see it happening in the more educated, more exposed, more liberal urban scenario where while marriages come apart at a nascent stage. The step mothers are also fortunately younger and not loaded with baggage of angst, bitterness and the olden days’ repressions that worked negatively in the second marriage. The narrow-minded old concepts have given way to exposure and education that give rise to broader viewpoints and fairness in dealing with others. So we see the old syndrome of the cruel stepmother turn on its head and instead are witnessing  affection from of a stepmother. Her bonding with the stepchild is endearing. It has to do with not only practicality but withmore awareness,  comes humaneness and compassion. People have perhaps grown out of the narrow -mindedness of the yesteryear with learning, experience and youth on their side.

There are so many early divorces and single parents  with young children looking for a new union. Those who are willing to be the step-parent, they would be well advised to equip themselves with the understanding that would be required to fit the new role. It is about giving individual space and not trying to fit the shoes of the biological parent, but creating a new identity of guidance, kindness and regulation. It is important for the step-parent to come with a mindset of taking some time to create a supportive atmosphere for the stepchild, with fairness, equality, tenderness and cutting the kid some slack for regressions as they would their own. It is better for the step-parent to operate as caretakers more than parents. The step-parent should allow the spouse who is the biological parent to look after their child and become the additional support system. It can be challenging but works toward harmony and to build strong bonds with the partner as well to be caring, loving and friendly with the stepchild. When treated as assets than liabilities, the children begin to respond instinctively and it becomes a win-win situation.