The mother-of-two became the first woman from north India to finish the gruelling race. 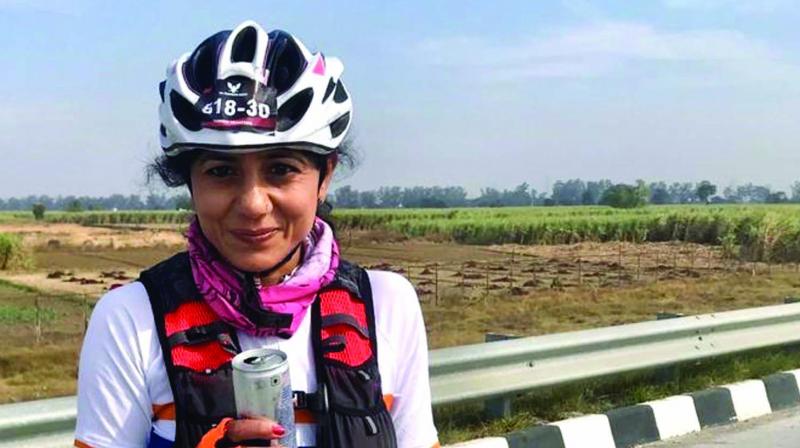 Gurgaon resident and a former HR professional Manisha Srivastava was never athletically inclined to running in her school days. In fact in her seventh grade at school, in a 100-meter race, she almost collapsed after running 70 meters. Manisha began running after the birth of her first daughter in order to cure her newly diagnosed asthma in her late twenties. However she stopped running almost immediately after being cured of her asthma but after turning 40 when she took up running again she didn’t looked back.

After participating in different marathons in and abroad she took part in the Ultraman Challenge — one of the toughest endurance triathlons in the world – which was held in India for the first time.

The mother-of-two became the first woman from north India to finish the gruelling race and etched her name in the history books. The race, which involves a participant to complete a 10km swim, a 421km bike ride, and an 84km double marathon distance run, spread over three days. The triathlon has been aced by only a handful of people from India before this and barring Anu Vaidyanathan of Bangalore all of them were men.

In a chat with this paper Manish shared her experience of Ultraman, her challenges and many more.

You are being considered to be an inspiration for many women, so tell us about your journey from being a HR professional to completing Ultraman India 2019?

When I did my M.B.A. (2003 to 2005), my younger daughter was just two and half years old and elder daughter was just six. Completing MBA with first division wasn’t the difficult task but doing a full time job afterwards became very taxing for my family. After leaving my job, I used to focus more on my daughters’ sports activities. I used to take them for their Squash practice and in that process, I learnt to play Squash and participated in a match too. Occasionally, I used to take them for swimming also and there, I learnt the first step of swimming i.e. ‘Floating’ on my own. Once, my husband and my daughters noticed that I didn’t get tired after running for more than an hour. They believed that if they leave me for full day, I could keep on running for the whole day. One day my husband had suggested that I should go for Airtel Delhi Half Marathon in November 2013 and I had just two months to prepare for that half marathon. Before that I had never gone beyond 4 to 5 kms in my running. Completed my first ADHM in less than 2 hours time that had motivated me a lot and also gave lots of confidence.

In 2013 only before my half marathon, Manasvi brought home a book titled ‘The Endurance’ about an Antarctic Expedition from his Microsoft office. That ‘Endurance’ word had fascinated me a lot. From then, the concept of an ‘Endurance Athlete’ came into mind. From 2013, my focus had always been to achieve endurance rather than to be an athlete. Finally, I got the opportunity to do my first Ultra(wo) man event in November 2019.

As an athlete there comes the phases of failure so how do you deal with all the failures?

Till now, I had not performed well in 4 marathons: Singapore marathon 2015 (timing 4:07:54), Tata Mumbai Marathon 2018 (time 4:01:35), TMM 2019 (4:18), and Capital City Olympia marathon 2018 (4:28:24). I ran Singapore marathon with an injured foot and blisters. This taught me to take recovery seriously and also use better accessories: anti-blister socks in this case. Before TMM 2018 and 2019, I fell sick so couldn’t run for more than 30 kms and finished them by walking rest of the distance. In Capital city marathon, looking at the route photo, I counted 9 elevations but in actual there were almost 15 huge mountains. I ran fast in the first 30 km but finished it by walking rest of the distance saving my knees from the injury. But these four marathons had made me comfortable for walking in the long distance run and also had given me confidence that I can run ultramarathon.

Pollution was a big challenge for me as I couldn’t go out for my running and cycling. I confined myself to indoor training only. The second challenge was cycling on road had been a huge challenge because of both traffic hazard and safety issues as a woman. Couldn’t train myself much to my expectations for this event.

How does a normal day go for you?

I get up at 4am. Drink one big glass of warm water. After that, I take one cup of black coffee with 2 slices of toast with one spoon of peanut butter, pinch of cinnamon powder and one small spoon of organic honey in between them. After taking my bath I go out for my running in Leisure valley. But last two months I am doing my morning exercise indoor on treadmill. Around 10:30 to 11 am I take 3 boiled eggs with some fruits and dry fruits. I love munching microwave roasted peanuts sometime in my spare time. I love reading so I spend my time reading News, articles and watching YouTube videos to correct my techniques in my mobile itself. Make my favourite milk, ginger and cardamom tea around 11:30am and 3 pm before I leave for my swimming practice. I go for usual lunch and dinner ( dal, rice, vegetables, etc.). I take early dinner. After that rest of the time is for my family and home.