To save a life is the biggest motivation for anyone to volunteer for such an operation. 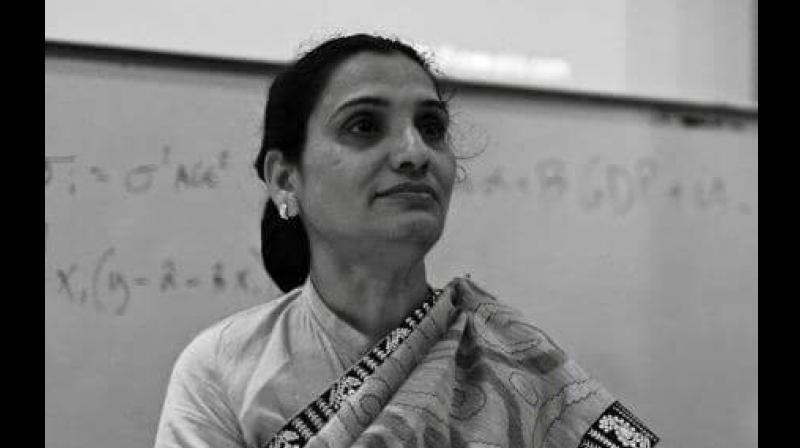 “Awareness has become prominent in today’s day and age. Any family in distress registers a complaint first. This was not the case 10 years back. Nobody used to write a 'missing' complaint back then," Triveni says. (Photo: Rescue Foundation)

Mumbai: Human trafficking is modern form of slavery which persists in our society in various forms, even today.

July 30 marks the World day against Trafficking in Persons (TIP) to help raise awareness on this issue. The United States Department of State investigates countries for its annual trafficking in-person report, every year.

According to news agency PTI, the US has listed India among Tier 2 countries. ‘Tier 2’ is for those countries which “do not fully meet Trafficking Victims Protection Act of 2000 (TVPA’S) minimum standards but are making significant efforts to bring themselves in compliance with those standards.”

The warriors who fight such injustices of the society often go unnoticed.

Triveni Acharya has been one such ray of hope for many in this age of darkness.

She has been working relentlessly on the cause and has rightfully gained herself the title of  ‘anti-human trafficking crusader.’

Triveni is the co-founder of Rescue Foundation, India. It was started in the year 1990 by her husband, Balakrishna Acharya who was its founder. He lost his life during a rescue operation.

After fighting to get justice for many years, Triveni was on the verge of giving up. "The girls we had rescued together gave me hope and a reason to live," she says.

Her foundation, like her grit, only kept growing. Today, Acharya and her team have saved over 6000 lives and there is no stopping them.

Acharya’s power-packed day lasts for 18 hours. According to her, there's no other way to get peaceful sleep but to work hard.

The foundation works in sync with many organisations in order to make a rescue operation successful. Civil society, law and judiciary and police enforcement are some of the many pillars they work along with every step of the way. 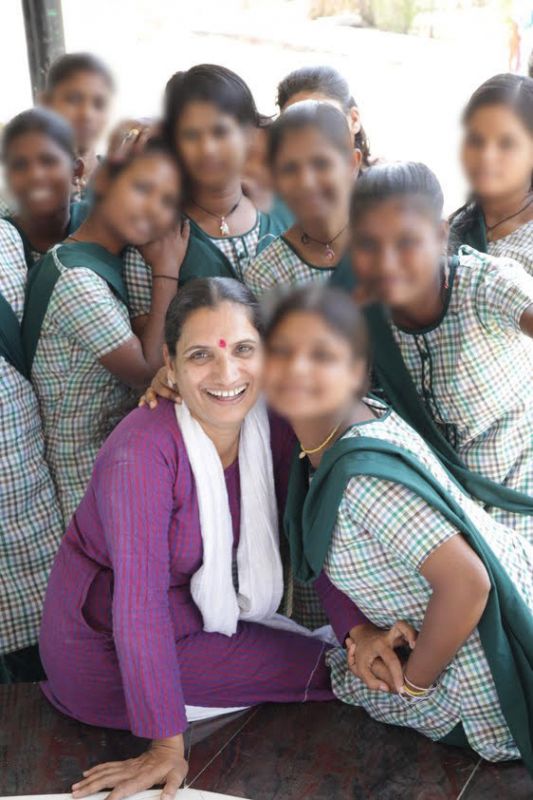 Explaining the process in which a rescue operation takes place, Triveni says "Once we get a lead or if it is brought to our notice that a girl has gone missing, a case is formally registered. Our work requires secrecy, precaution and most of all, courage… The cops come along with us on a rescue operation, but we don't give away the location until the very last minute."

The main source of information is the 'informer or spy' who is placed at various locations where they feel a girl could be trafficked, mostly in brothels or red light areas.

The biggest motivation for anyone to volunteer in such an operation is to save a life.

"25 years ago, when I was an activist and volunteer, the only motivation to carry out such dangerous tasks was to save lives,” Triveni reminisces.

"Some volunteers pretend they are clients and if they think that a girl present in these should be rescued, they give us a lead. Although volunteering of this sort is very rare. As for those who aren’t volunteers, their biggest motivation is money."

Speaking further about how they go about their work she says, “Our undercover spy or informant could be anyone from a person having a pan tapri near such an area or a makeup seller. Sometimes, it’s even rivals among themselves who give away information. Once we get a lead, our team verifies the information and if it's true we are on our toes and if the girl is rescued successfully, the informant gets a reward."

"However, the number of volunteers has considerably gone down. It’s difficult for a person from a normal household to even look in the direction of what are usually referred to as badnaam galiyan (infamous bylanes)," she adds.

The real work for Triveni's team starts once a girl is rescued. There are psychiatrists and psychologists at the center who help them out with their mental state. Other than this, their complete healthcare including treatment in cases of HIV AIDS, abortions, deliveries, hospitalisation, operations is taken care of. 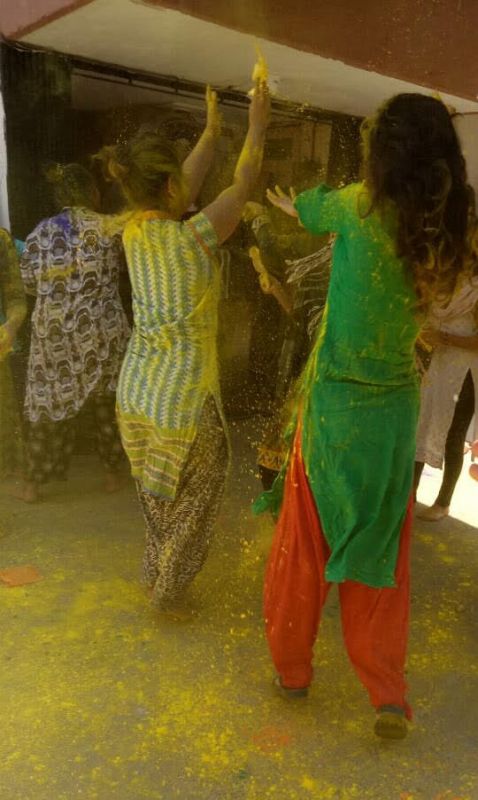 The rescued girls learn many skills at the shelter and may stay there till they turn 18. The court gives a "till 18" order to the foundation after which a girl is free to move out.

There are cases when the girls rescued maybe from Nepal, Bangladesh, Bhutan or some cross border country. In such cases, she goes back to her native land.

The government of both countries work in cross border cases-- Ministry of External Affairs, Home Ministry, Social Welfare Ministry and embassies of that particular country.

For girls from this state, community-based or family-based reintegration takes place.

A House Search Report (HSR) is given by the court during which the background of her family is checked. The family, too, needs counselling and once it is made sure that the girl will be safe with them; she is sent back.

“Awareness has become prominent in today’s day and age. Any family in distress registers a complaint first. This was not the case 10 years back. Nobody used to write a missing complaint back then. However, times are changing now and families have started accepting the girls. We have a large network and people working with us in every state,” she says.

The organization Triveni works with is huge but the syndicate of brothels and red light areas is even bigger. “It’s a huge syndicate-- brothel owners, brothel keepers, pimps, agents. It’s very convenient for them to displace girls. Unfortunately, they are a step ahead,” she says.

So has there been a time when a rescue operation has failed?

“Sometimes we reach the spot on time with our team but because the information is leaked, the girl is displaced from the location or she’s not found in the hidden cell at all. There have also been cases that while rescuing a girl a mob has overpowered us to snatch the girl away from our hands only to displace her. An operation fails at such unfortunate times,” she says.

But this doesn't stop them. "I had once written that those who say they're afraid of death are either lying or they work with rescue foundation," Triveni says.

According to Triveni every day is challenging in rescue foundation. She says, "It's nothing like 'cute charity' where people go to an orphanage or an old age home distribute clothes and chocolates, take pictures and leave. There's a lot more to this than charity.”

Triveni has travelled the world and won accolades like the Civil Courage Prize of the Train Foundation in 2011, the Asia Democracy and Human Rights Award of the Taiwan Foundation in for Democracy in 2010 and became the Humanitarian Honoree of World of Children Award in 2013. Her foundation also won the Stree Shakti Award for Human Entrepreneurs in 2008.

What has been her biggest takeaway?

"Trafficking is a global issue," she says. "There are various forms of trafficking. In most European countries I've travelled, the exploitation is comparatively less. There is a red light placed in front of women's cabins. Her services are given only when she's formally paid by the client and the money goes in her account.”

What is the solution to this?

"If there is demand, there will be supply," she says. “Girls will be kidnapped, sold or given away. If one sees the face of his sister or mother in the face of these girls, maybe it will make a difference.”

What can one do to help them out?

"We often get calls to rescue birds and animals but it seldom happens that we get calls indicating that a minor is forced. If you find anything suspicious, call on the child helpline 103 or the foundation." 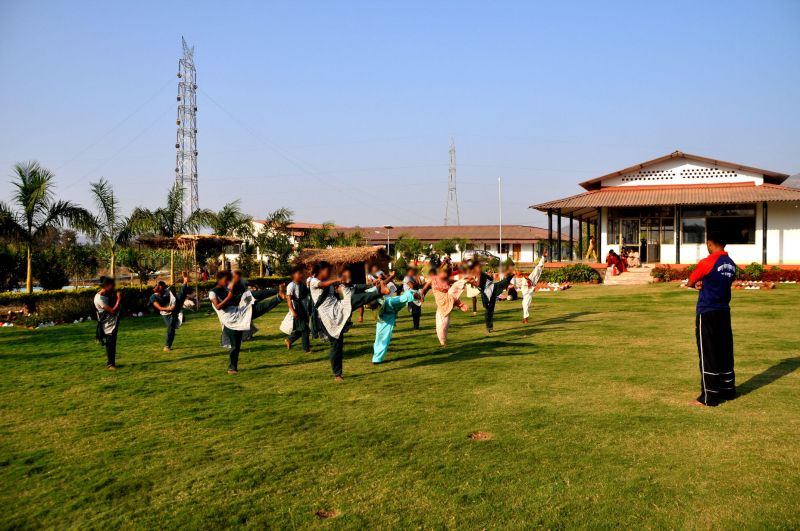 Activities being carried out at the shelter. (Photo: Rescue Foundation)

Making one more appeal to the society she says, "The girls should be treated as humans. They don't disclose their true identity wherever they go to work but people need to realise that they were victims of this horrible business and it is the stigma which has to be removed.”