A bridge for Indians

‘MR’ is the definition of a global citizen who helped Indians shine brighter in US. 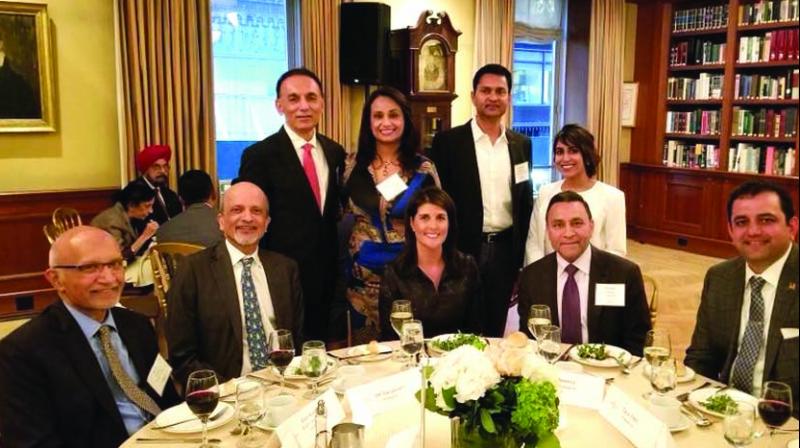 MR at dinner with Nikki Haley— the US Ambassador to the UN and friends.

Madhavan Rangaswami went to the United States later in life than many would from India, mostly as students, with stars in their eyes to the land of opportunity. Armed with a law degree that seemed to be of little use in his homeland, he set out to “see what he could see” and, in fact, even acknowledged that his eldest brother had grubstaked him with a few hundred dollars when he had not quite cracked the American dream.

Three decades later, Madhavan, or just ‘MR’ to friends in the US, can look back with satisfaction at not only having realised the dream of millions but actually using his success to leverage that of many Indians, NRIs and PIOs with the forum he founded– Indiaspora. Acknowledged widely as the most useful platform to connect with a whole band of successful Indian Americans, Indiaspora turned five recently. It is in what it achieved in just those five years lies a tale of transforming the success of Indian Americans into meaningful impact around the world.

Being praised for his effort to get an official Diwali stamp in the US, MR explains, “Indiaspora, allying with other organisations, did many things to get the community’s aspiration for an official Diwali Stamp to fruition. We got 20,000 people to write physical letters and postcards to the US Postal Service (USPS) asking for this stamp to be introduced. I personally met with President Obama at the White House and told him that our community really wants and deserves to receive symbolic recognition via the Diwali Stamp, and he asked his staff to support the initiative. Indiaspora and a few other sponsors organised a large Diwali Party in the Library of Congress in 2015, where we had a total of 1,200 people attending, including 50 Members of Congress.”

While Indian Americans are known to excel as high tech entrepreneurs and consequently are doing very well in the US, they are also very inclined to stay connected with their homeland through investments and philanthropy. This is where ‘MR’ has excelled as a bridge to a lot of connected activity of Indians in extensively promoting interactions to increase the visibility of Indian-Americans in society and politics. He tasted early success in taking Dutch software company Baan public, and later, in backing many sunrise companies like Neoforma and Niku as angel investor.

The level of success may be seen in his extensive travels, but most of it has also been tied up with promotion of US-India and even trilateral relations. During a recent trip to Sri Lanka, he was greeted by the American Ambassador hosting a dinner party in his honour in Colombo. He rubs shoulders not only with the biggest names in technology like Bill Gates but also with politicians on both sides of the American political divide, counting as friends not only Nikki Haley, the US Ambassador to the UN, but also every liberal from the side of the Democrats.

“I do meet a lot of celebrities in tech titans and business wizards as part of my work. The satisfaction is such meetings help us get our agenda forward of helping the Indian American cause,” he says. Giving back is a kind of responsible feeling that is intense in Indians anywhere in the world, more so perhaps in Indian-Americans. Madhavan has excelled is in driving the growth of Indian-Americans spirit of entrepreneurship to higher and more meaningful levels, leading to greater wealth creation through interconnecting people.

There are about 3.1 million Indian Americans in the US of a diaspora of over 30 million. The difference is that the Indian Americans are doing the best when it comes to median incomes and average overall growth as opposed to the creamy layer of the well-off Indian diaspora. “It is in trying to mould that prosperity into more purposeful community advancement that Indiaspora has played its part,” he reveals.

Travelling to two or three countries in a week for work as well as combining trips with family holidays with his wife Chris and two beautiful daughters, MR has been quite the global citizen, meeting Indian Prime Minister Narendra Modi more than once in setting up trilateral business-connect forums and rubbing shoulders with the who’s who of the tech world, the Chennai ‘lad’ has done phenomenally well in building bridges and promoting Indians, NRIs and PIOs.