Life   More Features  27 Sep 2018  Will Indian VIPs ever learn to live simply, and for others?
Life, More Features

Will Indian VIPs ever learn to live simply, and for others?

The British introduced a hierarchical and feudal system in India though they had a different system back home. 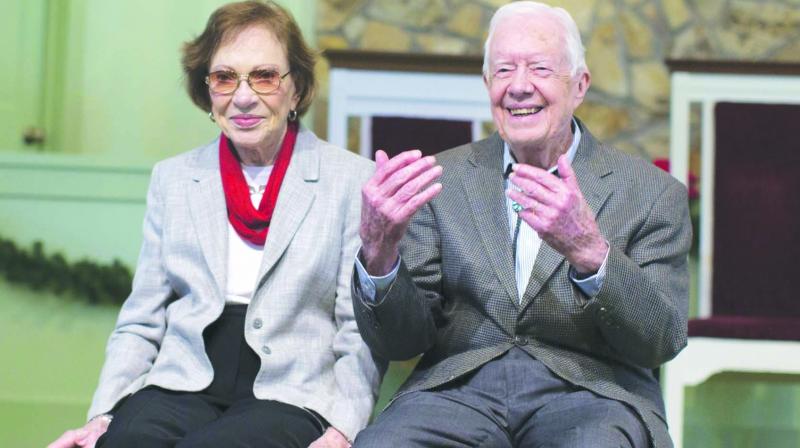 It was a delight to read about former US President Jimmy Carter, 93, and his wife Rosalynn, 91, leading simple lives and doing social work. They are busy building homes for others. They live in the two-bedroom ranch house, cook their meals themselves and attend the local Baptist church, where Mr Carter teaches Sunday school. He would never give a speech to an investment bank for a hefty fee. Will Indian leaders and VIPs learn from people like him? Oh, pigs might fly! Indian scriptures extol simplicity and humility, and Father of the Nation Mahatma Gandhi gave the mantra of plain living and high thinking. Alas, these are only highfalutin principles not to be actuated into practice!

The British introduced a hierarchical and feudal system in India though they had a different system back home. Ironically, Indians imbibed the feudal culture with ease. The Indian National Congress fought against the alien rule, but its president was given a guard of honour by its volunteers when s/he visited any place. After Independence, first President Rajendra Prasad was not willing to move into the palatial Rashtrapati Bhavan as he preferred a spartan life. He wrote to Prime Minister Jawaharlal Nehru more than once for providing him a small bungalow. He also exhorted Nehru to live in a small house. Nehru agreed to follow the advice but Girija Shankar Bajpai, secretary general in the ministry of external affairs, advised him against it, saying foreign heads of states and governments would call on him at his residence, and so, it would not behove him to stay in a small house. Nehru asked Bajpai to first convince Prasad who was not convinced but moved to the Rashtrapati Bhavan reluctantly. However, he refused to live in the rooms occupied by the Viceroy and stayed in other rooms meant for visitors. He also got his salary reduced to half — from `10,000 per month to `5,000 — and finally to one-fourth — `2,500 per month. After his retirement he was felicitated by the mayor of Delhi in a public meeting. In his speech, he said that people often asked him how did he feel living in the Rashtrapati Bhavan after spending years in jails, and he said that Rashtrapati Bhavan was also like a jail to him where he was cut off from the people. There were some others too who practised austerity. Hasrat Mohani, a member of the Constituent Assembly, stayed in a mosque when he came to Delhi for session.

Jayaprakash Narayan felt that people should get a hint of socialism even from the personal lives of highly placed persons. When Nehru joined the interim government on September 2, 1946 as the vice-president of the Viceroy’s Executive Council, he started living in the sprawling bungalow on 17, York Road (Motilal Nehru Marg). After Gandhi’s assassination, he shifted, for security reasons, to Teen Murti building which was even more palatial. In December 1947, JP advised Nehru that the Prime Minister of a poor country should not put up in such a big house. He reminded Nehru of his own memoir written after his (Nehru’s) tour of Russia that Lenin, the great leader of a country like Russia, lived in a small flat of two rooms with his wife and sister. Nehru replied that the PM was required to live in a big bungalow in order to keep up the dignity of the country. He added that two days back the ambassador of Russia came to meet him in a beautiful expensive car. Not only that, even the two cars escorting it equally expensive. JP countered that Russia had prospered much in the preceding years but India was yet to attain that stage. Therefore, the leaders of this country should live simply. On this, Nehru referred to Sarojini Naidu’s comment on Gandhi that lakhs of rupees of Birla was spent to maintain his simplicity. Several years hence in a public speech JP lamented: “But what was the result of that initial mistake is evident from the lavish style and belligerence of our present rulers. Mocking the crores of huts of the country all this is adding to the ‘pride’ of the country and safeguarding the ‘nation’s dignity’.”

Louis Dumont, in his famous book, Homo Hierarchicus, propounded that the Indian was a hierarchical man. His observation is based on the caste system. But now several other abominable forms of hierarchy have developed which distinguish VIPs from the common man. It is reflected in their lordly lifestyle — flurry of security guards, attendants and many other immunities and privileges. Hierarchy hangs from the neck of government officials as the colour of the ribbon of the identity card speaks of the rank — red for joint secretary and above, yellow for director and deputy secretary, and blue for under secretary and below.

However, India has also the luminous example of Mahatma Gandhi who stands out in the whole world to have shunned power despite being the tallest leader of the freedom movement. Another great leader to follow suit was JP. But the spirit of sacrifice seems to have vanished with Gandhi and JP as other leaders tenaciously clung to power with majority of them dying in harness, including Jawaharlal Nehru. In 1937, when the Congress formed governments in provinces, ministers travelled in third-class compartments to set examples of simplicity. It was under the influence of the Gandhian ideal. Alas, it did not last long. However, in 1950s and ’60s, the tendency to flaunt power had not acquired a hideous proportion. So, quite a good number of leaders led simple lives. But aberrations could be seen even then. In 1958, daughter of Congress MLA and ex-minister Mahesh Prasad Sinha of Bihar was married off at Patna amidst huge fanfare. It was reported to Nehru who wrote to Bihar chief minister Shri Krishna Singh, “There are plenty of weddings in Delhi and I have publicly criticised the extravagance of some of our rich people there. But I do not know of any Delhi marriage which had a baraat procession of 500 cars, apart from elephants, horses, etc.”

What is worse, Indian politicians seldom retire. Even past Presidents who cannot hold any post do not do any public service. A.P.J. Abdul Kalam was an exception. Retired judges of the Supreme Court, who cannot practice, are busy minting money in arbitration. We have some happy exceptions like late V.R. Krishna Iyer, M.N. Venkatachaliah, Ruma Paul, et al, who never accepted any arbitration. Ruma Paul prefers going to school and spending time with children. Retired bureaucrats find sinecure jobs and cool their heels in commissions and Raj Bhavans. Former MPs/MLAs are getting more than one pension and enjoying many privileges, including unlimited free train journeys.

In India, VIPs remain VIPs lifelong. They will barely deign to behave like ordinar people. In 1958, JP went to Israel and was astounded to see former Prime Minister David Ben-Gurion driving tractor in the farm. In many developed countries, former Prime Ministers and Presidents live like normal citizens and do something for their society. But Indian democracy throws up blue-blooded VIPs.

The writer is a senior TV journalist and author