Kalbeliyas are basically snake charmers who travel from one place to another. 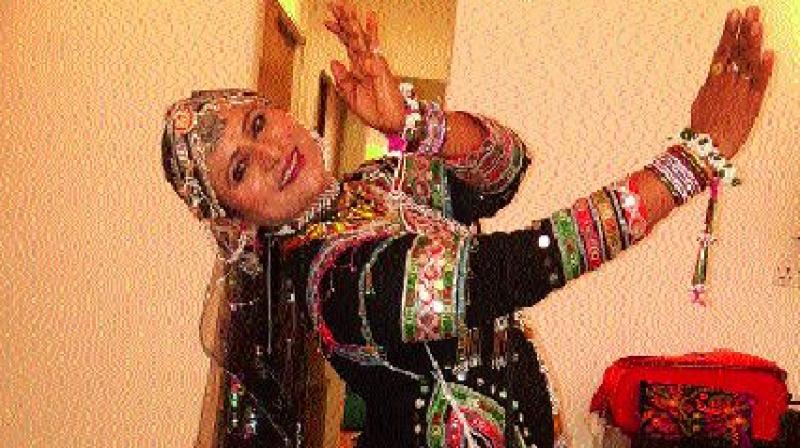 Today, I am going to take you inside the life of a path-breaking dancer who was almost buried alive just one hour after her birth because she was a girl. She was rescued by her aunt. She comes from the traditional and orthodox nomadic Kalbeliya community. Kalbeliyas are basically snake charmers who travel from one place to another. Their income is mainly sourced from the prayer offered to snakes and also from Ayurvedic medicines dealings.

This is none other than the legendary Kalbeliya dancer Gulabo Sapera. She was neither allowed to study nor to work and was forced to stay in Ghungat. Gulabo Sapera  is actively involved in music by Titi Robin. Also, her life is featured in a French book written by Thierry Robin and Véronique Guillien titled Gulabi Sapera, danseuse gitane du Rajasthan (Gulabo Sapera, the gipsy dancer from Rajasthan).

Inspite of all odds, Gulaboji, has risen to a level that requires immense courage and hard work. Excerpts:

How did Kalbeliya become a part of your life?
I was a born dancer. My mother says that instead of playing, I would always be dancing to the snake charmers flute music. Once I was dancing at the Pushkar Mela and a Rajasthan tourism officer after seeing my dance, said, “tumhari toh haddiya he nahi hai (you have no bones in your body)”. The officer offered me to dance for foreign guests, to which, my family later agreed. At the age of 10 in 1981, I had my first stage performance. For the show, my father had gifted me Ghungaroos. With bells around my foot and draped in a long Ghungta, I fearlessly danced my heart out. That day, the dignitaries present cheered like never before and called my moves ‘Kalbeliya ka Sapera’. It has been over three decades and now I feel proud to say that Kalbeliya dance has arrived.

Your community did not allow women to dance. Who helped you to move ahead?
Maharani Gayatri Devi and a few other royals explained and encouraged my family to allow me to pursue my snake charmers dance. Breaking all norms posed by my community, I moved forward. Thanks to Maharaniji that I continued dancing.

When did you get your due recognition?
In 1985, I was invited to dance at the prestigious Indian Festival in Washington DC. Just a day before my tour, my father passed away. With tears rolling down under my long ghungta, I danced at the festival. When I came back, my community people welcomed me. Also, they asked me to train other women in Kalbeliya. To me, this warm welcome with a new changed attitude was the time when I received my due recognition.

With so many dance forms coming into India, what is the folk dance scene?
In the 1980s and 1990’s folk dances were very popular. I remember dancing with different folk dancers. But after 2005, there was a big change. Today, the reality shows only focus on Hip Hop and Contemporary. I have nothing against international dance forms but I believe that if we through our films fail to promote our own cultures, then who will?

Do you think our folk dances are more popular in the West?
I have loads of international students. I feel humbled that their government gives them scholarships to come to learn under my guidance. These students go back and perform Kalbeliya professionally which helps us popularise our rich culture in the West.

Did you specialise in any other folk form? And what is its future?
I have only specialised in Kalbeliya and teach the same. I do not want this art to die with me, so I try my best to spread it. I wish to thank the Government of India and the Padma award committee for honouring me Padma Shri in 2016.

Did your stint in ‘Bigg Boss season 5’ bring more light to Kalbeliya?
Yes, it did add to my art. Initially, I was not keen to participate but my children explained me the advantage of a show. People started to call me ‘Bigg Boss wali Gulabo’. I have performed many shows with the same tag.

You have achieved worldwide recognition, What’s next?
I have dedicated my life to Kalbeliya through shows all over the world. But, my dream is to open a dance academy in the same place where I performed first ‘Pushkar’. My dance academy will not only teach Kalbeliya but will also teach Ayurveda. Also, it will have a museum that will also showcase Indian handicrafts, traditional instrument, cloths and much more.

The writer is a World Book record holder and a well-known Ballroom dancer. Also, a Bollywood choreographer who has been honoured with National Achievement Award and two National Excellence Awards by the Govt of India. He can be contacted on sandipsoparrkar06@gmail.com