Twenty four-year-old street and sketch artist, Prithviraj Shinde is colour-blind, but his paintings hardly ever give it away. 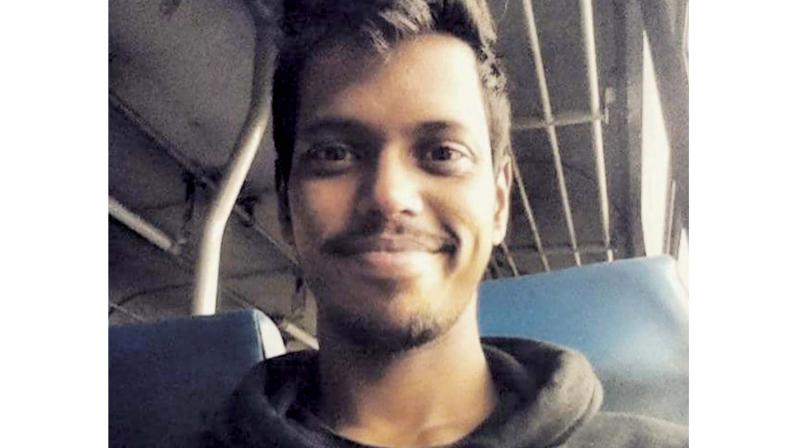 Sitting outside a nondescript chai tapri in a red bush shirt and beige shorts, Prithviraj Shinde refines a greyscale sketch with the nonchalance and tenacity of a seasoned artist.

His sketchbook is replete with faces of old men and women plastered with the third-eye symbol on their foreheads, a sign akin to Lord Shiva. The tone of the interview is set within the first few sentences when he says, “Street art is not graffiti.”

Prithviraj who is colour blind has recently started street art and is still learning the ropes from fellow artists. But his comfort zone, so to speak is greyscale art. “Greyscale art is the best way to understand light. Lighting and shadows are the most important elements of art.” he asserts.

(left to right) A painting of Jim Morrison; greyscale image of an old-man with the third-eye and a painting adapted as street art.

He also has a few public walls in Navi Mumbai to his credit under the street name Elmac.

Arguably, one would think of his sketches and paintings as lacking in colour and vibrancy. But his drawings and paintings never make anyone suspicious of his colour-blindness. A disability, which made itself known to the artist when he was all of four or five. “I know a red is darker than pink. So if you give me two colours I know where to place them, either on the darker side or on the highlight side.”

It was his father’s friend who helped his parents figure out this problem. “My father’s friend was an artist and he came over to my place one day. So while playing he asked me to paint a face. I instantly picked up the colour black. Perplexed, my father asked me why are you painting in black? To which I responded because we are black!”

While he was too young to understand his condition, his parents were equally unaware of the prognosis. “There were times when my mom sat me down and wrote the names of all the colours on my colour pencils, describing which colour is what and what goes where,” narrates the artist.

For an artist to paint without knowing the concept of colours seems like an elusive prospect, but to Prthiviraj none of that ever matters. “Everyone’s so conscious about colours! I am basically a clown in a sophisticated society, but I don’t feel it is wrong. The meaning behind my art is what I’m looking to highlight, the colours shouldn’t matter; if I feel this colour is going with this I do it.”

The real challenge for the artist though is to pick colour combinations. “Actually, my retina gets confused while making colour combinations, and there is a pigment which is missing. What I see is quite colourful but I don’t recognise which colour is which. For me a brown might be a darker shade of grey,” he says.

Colour-blindness, as Prithviraj explains, doesn’t mean he can’t see colours at all.

“I’m not stupid. I know what colour a tree is. A brown bark with green leaves and when it dries it’s a yellow. When I started doing paintings, I knew how to make the skin tone — you take yellow, white and red. But after I mix them all together I don’t know if it’s turned out to be green or the skin colour,” he explains.

The artist further plans to use this art form to highlight social inequalities that plague our society today.