Subramanian, who is fondly known as Subbu among colleagues and friends, was the first one to go to college in his family. 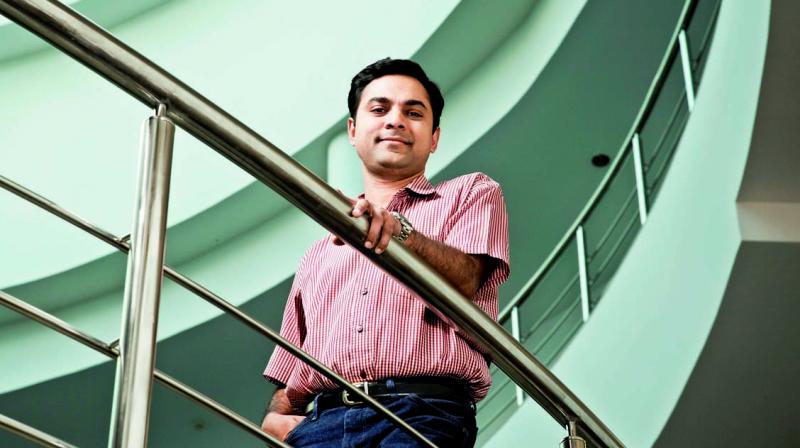 Leadership trainer, entrepreneur and author Farshad Asl refers to the American Dream in his best-seller ‘The “No Excuses” Mindset’ when he says, “we live in the land of opportunities. People come from all over the world to hustle and work their way up to places that they could only imagine or dream of”.

Many have left the Indian shores as well in search of this American Dream and it is time for them to come back. Freedom to dream big and opportunities to achieve them are no less in their own land. Krishnamurthy Subramanian, the newly appointed Chief Economic Advisor of the country will readily agree to this as his journey is one from an ‘extremely humble background” to the coveted office for any economist in the country, that too at a relatively young age of 47.

His father A V Krishnamurthy sold ‘papads’ (appalam in the local language) on the streets of Tambaram on the outskirts of Chennai to make both ends meet and complete schooling. The senior Krishnamurthy had to leave his hometown in Tiruchirappalli for Chennai after he lost his father at a young age of seven. He did odd jobs and somehow completed schooling. He got a job in Indian Railways but remained in the lower grades for a long time.

Subramanian, who is fondly known as Subbu among colleagues and friends, was the first one to go to college in his family. His father knew the importance of education and wanted the children to have what he was denied due to financial constraints. Subramanian thankfully acknowledges the role played by his father in making him what he is today. His mother, a homemaker, too is a Tamilian, who has her roots in Kerala.

Subramanian and his younger brother Vaidyanathan spent their school days in Bilaspur, now in Chattisgarh. During the Bilaspur days he cultivated a liking for Bollywood flicks and songs. It is interesting to see the other side of an economist, who is a fan of Amitabh Bachchan, who delights in movies like 3 Idiots and loves to hear Kishore Kumar’s Jeevan Se Bhari Teri Aankhen from the movie Safar. As most of the children of 80’s he too developed a craze for cricket, which declined to die out even during the days of academic rigour.

Being good at mathematics, he gained entry to the prestigious IIT Kanpur, graduating in electrical engineering. He worked with Tata Consultancy Services for three years under a bond after completing graduation. By then, he started to realise that he was not meant to be an engineer. With his passion for mathematics, finance felt like a natural extension. He did his MBA in finance from IIM-Calcutta, where he was named to the Honour Roll of the Institute for being a top ranker in the batch and was awarded the Institute’s coveted medal for the most balanced outlook to business problems.

For the next two years, Subramanian worked with ICICI with their derivatives research team. Wanting to go deeper into financial economics, he applied for Ph.D and going by the advice of his mentor and banker Nachiket Mor and former RBI governor Raghuram Rajan, he chose University of Chicago Booth School of Business, which is known for its free market economics. It was the time when behavioural economics and other schools of economic thoughts were gaining traction. His guide Luigi Zingales and Raghuram Rajan had together penned ‘Saving Capitalism from Capitalists’ around that time. An influence of these thoughts have reflected in the banking reform recommendations made in 2014 by the P J Nayak committee, of which Subramanian was a member.

After completing Ph.D, Subramanian served as finance faculty at Goizueta Business School at Emory University in the United States till 2010. By then, he had decided to come back and contribute to the economic growth of his home country. By 2012, his guide Raghuram Rajan also had taken up the prestigious responsibility of heading the Reserve Bank of India.

In 2010, Subramanian joined Indian School of Business in Hyderabad and currently serves as Associate Professor of Finance (with tenure) and Executive Director for the Centre for Analytical Finance. Subramanian’s wife Kavita also serves the ISB as its head of Academic Services Administration and Senior Associate Director in Hyderabad. Interestingly, Subramanian’s younger brother Krishnamurthy Vaidyanathan is also associated with the ISB.

He is a faculty member in its Mohali campus. He too is a graduate from IIT Kanpur, alumnus of IIM Ahmedabad and has done Ph.D in Finance from Edhec Business School in Paris.

Subramanian also serves as a member of SEBI’s Standing Committees on Alternative Investment Policy, Primary Markets, Secondary Markets and Research. He was part of the Uday Kotak Panel, which has made recommendations on corporate governance. He is also on the boards of Bandhan Bank, the National Institute of Bank Management, and the RBI Academy and was also part of the P.J. Nayak Committee, which reviewed the governance of boards of banks in India. He has also done a research in bankruptcy code.

The Chief Economic Advisor technically has to play a key role in shaping the economic policies that guide the government initiatives. Subramanian is an apt choice as Chief Economic Advisor at a time when the banking system is beleaguered by huge non-performing assets and loan defaulting corporate sector continues to be an unresolved puzzle. The timing is crucial as the National Democratic Alliance, hit by the recent losses in the state assembly elections, will need an “Economic Survey boost” before going for the Lok Sabha polls next year.

As CEA, the first task for Subramanian would be coming out with a survey that will define the policies of the government aspiring for another term. The task will become even more arduous if the survey has to outline solutions for the vexing problems of the economy while appearing populist. Subramanian believes in expansion of formal economy through taxation and taxing of farmers. After the recent poll results which reflected the discontent among agrarian community and the informal sector, Subramanian may have to keep aside some of his economic theories and get to work on a more populist survey. More than long-term policies, the government would now prefer quick fix solutions.

Subramanian also holds strong opinion in a variety of subjects which sometimes seem radical for a vote-dependent political class. As an independent economist, Subramanian has been quite vocal about the economic and political developments in the country. But diplomacy and restraint are two virtues that come handy when one becomes part of the administrative system, especially when the independence and autonomy of governmental institutions are at stake.

He had expressed his optimism about the state of affairs at a time when Arvind Panagariya was Vice-Chairman of Niti Aayog, Arvind Subramanian the CEA and Raghuram Rajan the RBI Governor. All of them have gone and even the successor of Rajan has quit. An advocate of providing more autonomy for public sector banks and a critic of state interference in the banking system, Subramanian will have a tougher time ahead.

He was among the very few economists who had welcomed demonetisation after the government withdrew the high value notes. While his views drew a lot of flak, he has also openly praised Raghuram Rajan and Arvind Subramanian, who at different points of time, disapproved the government’s misadventure. His articles linking subsidies and dynasty rule and dissection of crime data of Uttar Pradesh also drew the attention of readers, especially those who are critical of the current political dispensation at the centre and the state.