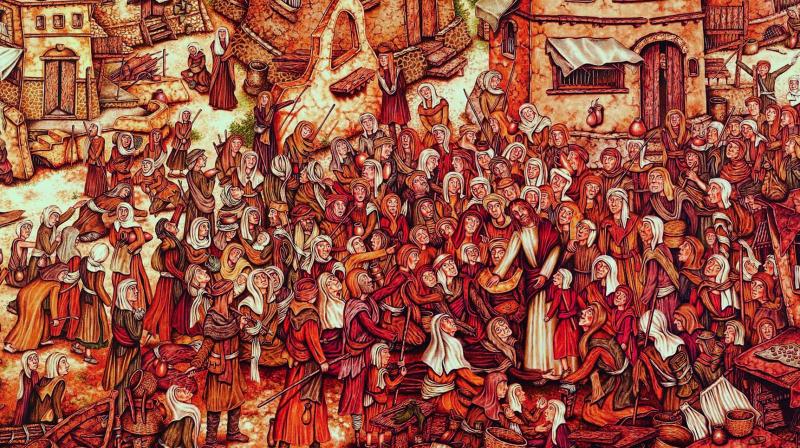 Milburn was drawn to painting after she lost both her parents at the age of 18.

It is not possible to glance casually at the works of artist Milburn Cherian. The recent exhibition by her at Lalit Kala Akademi mesmerises with its intricate detailing in every corner of the canvas. One feels transported to another land, exploring a rich story with multiple sub-plots.

This is her first time exhibiting solo in the Capital. Talking about her painting style, she says, “Initially, I didn’t know if I liked Dali or Picasso or Rousseau. I was unsure of any style. Then I saw Pieter Bruegel's work. He strongly uses a lot of people in his works and I didn’t have the skills to draw people, so I used to try and get away with painting nature. It took a long time to decide on a style and know what I wanted to do. My work is very different from Bruegel’s but the crowd are a common theme. It took very long to get a signature style but there is no shortcut. It happens gradually.” Her works have a surreal appeal with each character in her paintings representing uniqueness and bursting with creative thought. 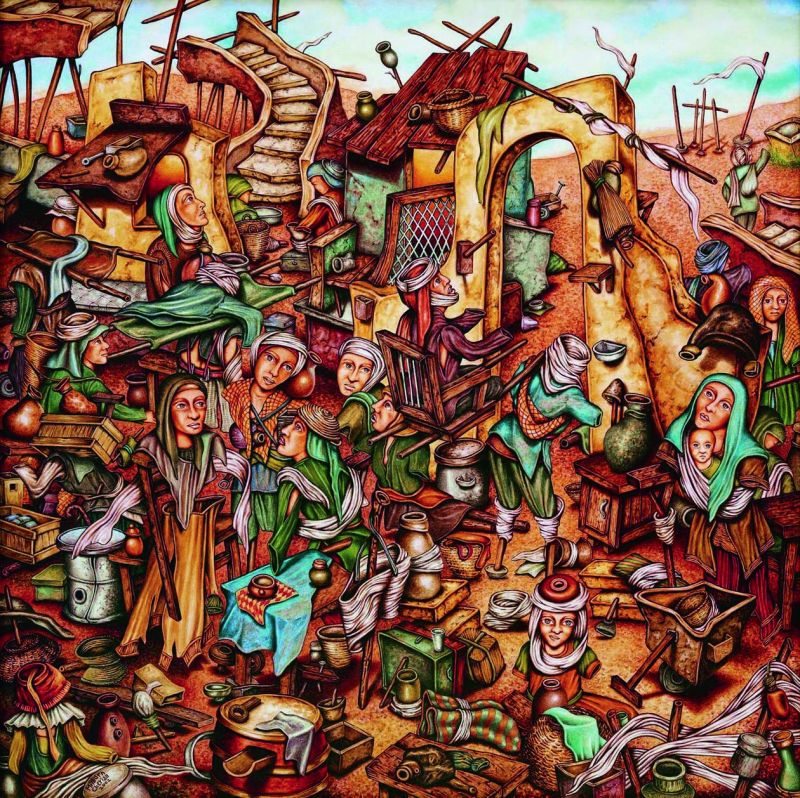 Ask her how she imagines so many elements for a single canvas and she says, “I don’t imagine. I am the most clueless artist from the beginning to the end. I start painting a corner of a canvas, I doodle something and keep adding to it slowly.” It takes Milburn anywhere between a week and a month to finish a painting and she is very disciplined about her work.

“The crowds in a way depict the pain, suffering and wretchedness of life. The world is not overpopulated, it’s just that people are jammed into cities. So we are getting the feeling of being overpopulated,” she shares. She feels deeply for the poor and tries to depict poverty through her works as well, “It is utterly sad that in this age and era, people are so poor that they don’t even have food,” she adds. With much empathy in her heart, she has donated money generated from her works for several causes.

While she paints many crowds, her paintings also explore clowns and single figures. “It can be so overwhelming that sometimes I feel like it’s driving me mad. So then I take a break and draw single figures and smaller works,” she explains. Her paintings also explore a lot of themes around Christianity. ‘The Healing’ is one of her favourites. “It is only with biblical themes that I actually keep a story in mind. Otherwise it just flows the way it wants to.”

(Clockwise from Top) Painting titled ‘The Healing’; ‘Sky above’ ; ‘Give ear to my prayer’

Milburn was drawn to painting after she lost both her parents at the age of 18. “It was a difficult time and I had to look after myself. I had siblings but it was difficult. Art became my way to cope with life. It was an escape. I hid in my imaginary world,” she says.

Gradually she started exploring the entirety of the colour palette. “I used to use very earthy tones in the beginning, as is visible in my early works. I was scared to use colours. However, with time I started using a bit of colour. It even goes overboard at times now. I am still trying to figure that out. Colour also camouflages the pain that I am trying to depict. People get stuck in the colours and don’t notice the shell-like body.” Often one might end up wondering if the pain in some of her works is real or a tale.